“They are about 65 per cent planned. The rest is a bloomin’ mess!” says Geo Wyeth, answering my question about the role of improvisation and planning that go into the live works. In the run up to Lausanne’s Les Urbaines Festival, running December 1 to 3, we catch up with the multimedia artist and musician who will be performing JUICE CROSXXXSING at the event.

The self-described ‘hoarder’ works across video, installation, performance and sound, where the “thing never quite becomes a thing” and is “always moving, or stretching, yawning, reaching.” While Wyeth’s practice is one of collecting and intersecting, music is at the core and is the glue that holds the fragments together; a ‘carrier of the mood.’

Based between New York and Amsterdam, s/he was a recent residence at the Rijksakademie van beeldende kunsten for the years 2015/2016 and has performed internationally at Amsterdam’s The Stedelijk Museum, New York’ MoMA PS1 and Los Angeles’ MoCA to name a few.

“Like where can I put it where it won’t hurt anyone I love and care about, and how can it be useful and spiritually generative?” In a conversation about his practice, Wyeth opens up about the ideas behind his accumulations; from dolls and puppets to rage, aggression and playing out narrative through dress up and performance.

The event is an annual festival put together by Galerie Juliette Jongma and Kunstverein in collaboration with De Ateliers.

Organized by Jeanine Hofland and curated by Geo Wyeth,  the “block party festival of performances” will feature niv Acosta with CLAPBACK, Johannes Büttner‘s robotic vacuum cleaners ‘Erika and Jürgen,’ DYNASTY HANDBAG with a “mixed handbag of songs” in ‘I Never Were Again, A Concert,’ a five hour ‘sympoietic’ in Dr. Holobiont and the Lichens’ ‘We Need Gloves,’ Bruno Zhu‘s group performance ‘Confessions’ and Wyeth as master of ceremonies. 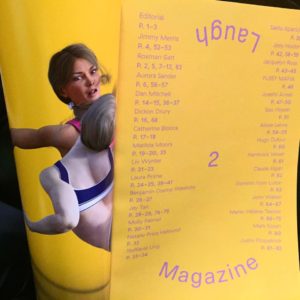 The one-night-only mini-festival An Evening of Poetry takes place on Friday 22 April in a living room by the canal on the city edge of Molenbeek. It’s full of people probably lured by Brussels-based curatorial project Buenos Tiempos, Int.’s motto, “faggotry as it is today”, or by the e-newsletter heralding in seductive serif: “We would be very gay / To have you between us …”

Hosted in the shared home of Buenos Tiempos, Int. founders Alberto García del Castillo and Marnie Slater, the evening comprises spoken and sung poetry by international artists Olivia Dunbar, Benjamin Seror and Geo Wyeth, all of whom could be said to operate in the sprawling domain of queer performance and/or poetry, though each with very different approaches. Contrary to the rest of that particular week’s commercial gallery-oriented proceedings (thanks to Art Brussels and its various self-consciously ‘independent’ offshoots), the event is graciously not an extension of the work day in the guise of a party.

The environment is domestic, the crowd loose, the entry unexclusive (read: free). The beer is cheap and the works play out on the same floor on which the attendees stand. There is no facile gesture of participation (though we are implicated), no price, no waiting list and no extensive documentation (for a hoot, see BTI’s website ‘documentation’, “About An Evening of Poetry …”, a 10-minute real-time capture of the setting sun taken from the venue’s roof on the same night). Buenos Tiempos, Int. would distance itself from the need to be negatively defined by what the art market does (speculate, voraciously consume, exploit). That said, this evening does mark itself as vastly different (just look at the lighting) within the context of the fair week, the oppressive sameness of market booths and of fluorescent white cubes.

First up, Brussels-based Seror gives a synth-infused performance mixing poetry and pop music, while his ungainly dance moves and increasingly enthusiastic, near head-banging sincerity leads to an electric guitar solo and thundering applause as he completes his last song. Somewhere between amateur rock and heartfelt emotional folk, Seror is succeeded by an absent yet personal reading by Dunbar, who begins with a discussion of her dick, her boyfriend, and his hot rod magazines. The Canadian artist could not be in Brussels and thus her voice is remotely emitted from speakers; nonetheless, attendees stand and listen, facing where her presence would have been, towards the stage. At some point Dunbar breaks into song and her stunning voice is a shock (though there is no final evidence it belongs to the artist herself, one assumes so). Juxtaposing varied references and images via text and music, Dunbar’s collage-like piece consciously and explicitly recalls the current tendency in contemporary art for text-based, quasi-autobiographical, technology-contingent and somewhat emotionally distant poetry.

This constellatory approach to text is reflected in US-American Wyeth’s live work, which compiles vignettes of physical performance, including costume changes (or removals, as it were), with song (another breathtaking voice), and poetry. The performance commences with a disquieting baby-like voice coming from a disoriented, sunglass-wearing Wyeth, crying repetitively as he wanders about, dragging a small carry-on size wheelie suitcase: “Daddy, Daddy? Where are you, Daddy?” One can’t help thinking of the lost father, the metaphorical authority, which is supposed to keep our subjectivity in check. One can’t help thinking of all those adult children in their 20s and 30s wandering around airports waiting for low-cost flights, wondering what the hell their life is about. Wyeth’s specific ‘Daddy’ becomes the generalised ‘Daddy’, the dead father; we killed him long ago but neglected to replace him, and there is no more ideology to believe in; we are lost.

Shortly after, Wyeth enters a vignette where he lifts up his long pullover to reveal the word ‘juice’, written in some sort of brown fluid. Juice for children; juice for sex; juice for power. The meaning remains ambiguous but Wyeth uses the repetition and visual representation of this word to assert its affect. Towards the end of the performance, he enters an intensely physical phase where he dry humps the floor, microphone in mouth amplifying the carnal sounds of this increasingly violent action. At some point Wyeth grabs onto an attendee and makes his way into this man’s arms, like a baby. By now the sounds have changed to a much more disturbed, even tormented moan, child-like in its tone. The image we are left with is this sexualised child, deprived of dignity but triumphantly clinging to the man. With this image, the presumed innocence of our spectatorship falls away completely. We are complicit and only too aware of the pleasure/unease we derive from this trans man’s revelation. Do we also feel compelled to cry for Daddy? Thundering applause.

It’s no surprise Buenos Tiempos, Int. have garnered a faithful following both locally and abroad. This is their second poetry event, the first, in May 2015, featured Kathy Acker and Dunbar, Hadley Howes and Brad Phillips. Their regular online exhibitions, usually presenting the work of one artist, include video works, documentation of performances, text pieces, images, etc. These shows give concise insight into artists whose practices are often difficult to categorise. Shows by artists as varied as Vava Dudu, Juliana Huxtable, and CAConrad, reveals BTI’s interest in queer visual art, music and experimental literature, as well as their effort to trace a certain lineage of queer practices and chart connections between artists not normally seen or thought of together.

This is certainly the case at An Evening of Poetry. Living up to their motto, Buenos Tiempos, Int. (which, after all, means ‘good times’ in Spanish), made faggots of us all. Though most were probably already quite open to it.**