London’s LD50 is presenting a weekly symposium called A Conference of Genetics, running May 7 to 28.

The four evening events will cover issues surrounding Genetic technology, theory, practice and “their implications for society and culture, in our time and the future”. It will feature presentations, discussions and screenings by Dr Silvia Camporesi on genome editing and 1998 film Gattaca on May 7, and one on ‘Autoimmunity’ with Jesse Darling and Alice Andrews hosted by Goldsmiths University on May 18. ‘

On May 21, Dr Florian Plattner will ask ‘Can we enhance memory?’ and screen TransHumanism ( h+) / Genetic Modification of Life (2010), while on May 28 Dr Peter Saunders will address ‘Epigenetics and Evolution Theory’ with The Monk and the Honeybee (1989).

LD50 is named after the median lethal dose of an ingested substance in toxicology and has presented exhibitions by the likes of Adriana Ramić, Harm van den Dorpel, Brace Brace and more.

Joey Holder and John Russell are presenting joint exhibition, TETRAGRAMMATON, at London’s LD50, opening April 21 and running to May 29.

There’s little information available on the exhibition itself aside from its title: the Hebrew word for a deity consisting four letters (יהוה) that transliterates to YHWH, also known as ‘Yahweh’, also known as god.

The press image of a classical depiction of ‘Jesus Christ the Saviour’ beholds an unearthly bitcoin forum avatar and introduces the work of the two artists. Russell is a veteran video and net artist and Holder is an emerging artist who’s aesthetic grows from an interest in net art and science. Both of them share a similar aesthetic in what writer Augie March called the space where “the uncanny bleeds into the outright unsettling” in an aqnb interview-feature on Holder.

Adriana Ramić and Harm van den Dorpel team up for a joint exhibition titled The vertebral Silence, running at London’s LD50 from December 10 to January 28, 2016.

The show by New York-based Ramić and Berlin-based Dorpel (with whom we have published an interview here) comes without a press release or extensive details about its themes or material nature.

It’s the accompanying web page, however, at van den Dorpel’s delinear.info, that gives a hint as to what to expect: each page brings a seemingly random composition of text (“Sacred number of Eris, Goddess of Discord (along with 17 and 5).”) and image. 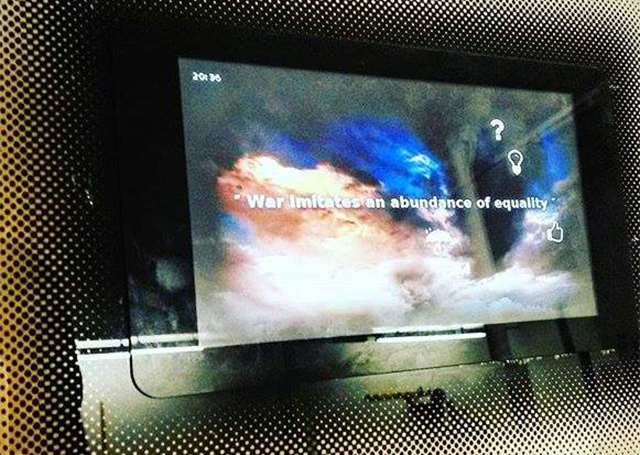 A background white noise awakens a feeling of being just a minimal part of something much bigger than ourselves. It acts as a subtle input to set up the mind, in order to navigate the bright quiet space of London’s LD50 running November 6 to December 3. It’s the sound of a storm on Mars: perhaps the next step within the to-do list of the posthuman subject and her new territories to colonise. In the gallery space, the works of the artists Juliette Bonnevïot and Christopher Kulendran Thomas converge in their joint From Dust exhibition, aiming to unify some inhuman traces while stretching boundaries and challenging the limits of representation.

Opposite the entrance, a series of monochrome paintings take over the wall. Everything seems quite usual until getting closer to the works and reading what materials they are composed of, on a framed white paper hung above them. Juliette Bonnevïot’s ‘paintings’ are named after the pigment mixed with several materials containing xenoestrogens; a term derived from the greek word zenos, meaning ‘stranger’ and referring to natural or artificial estrogen-like compounds. The hormonal composites surface in the form of a coloured texture deployed on long canvases.

Two sculptures from Bonnevïot’s project Minimal Jeune Fille rest on the wooden floor. On one, her own plastic waste is crystallised in four blocks of bio resin acting like table legs. The legs prop a sheet of PET (polyethylene terephthalate) plastic, on top of which lies a microfiber cloth. An empty glass bottle lingers beside it. On the other, a folding-screen structure sustains more PET plastic, folded and moulded as if it was rippling. Made with the same kind of material, two transparent torsos, PET Women, hang on the opposite wall, almost floating. There is a very subtle handwritten text on all of them, transcribing tips that so-called ‘eco housewives’ share with each other through forums devoted to sustainable households.

On the opposite wall, Christopher Kulendran Thomas’ works add a very different tone to the conversation. Trapped behind a black web, some cuts from popular vintage magazines and some drawn existential motifs create the illusion of a nature-human merge. The collages and drawings lean on a wooden framed canvas, decorated with pastel brush strokes and greyish angry scribbles. The solemn medium of painting turns into a tactic structure where diverse realities are flattened.

These works carry data from other contexts in the same way each dust particle carries the data throughout the solar system –as mentioned in the press text quoting Iranian philosopher Reza Negarestani. Materials are carriers of concepts and information, which, through encountering the gallery space, create a compound of meaning, recalling our networked, sometimes inhuman, condition. An escape to Mars would be perhaps the ultimate act of humanist hope. **

Juliette Bonnevïot and Christopher Kulendran Thomas’ From Dust is on at London’s LD50, running November 6 to December 3, 2015.