Gian Manik‘s National Trust solo exhibition is on at Port Hedland’s The Courthouse Gallery in Western Australia, running July 27 to September 22. The Melbourne-based artist has produced a mix, titled ‘RAGA’, after the melodic framework of Indian classical music, which means to generate certain moods and “colour the mind”. Manik’s contribution to the tradition, features a ‘nighttime’ theme, one that’s specific to the artist’s sensibility of a certain nocturnal life and intensity.

Classical, industrial and hard techno/speedcore tracks by the likes of Gorecki, SPK and Exocet come accompanied by recordings of tattoo guns, tattoo removal, swinging doors, footsteps and a review of the algorithmically-generated Co – Star app. These themes are an interpretation of the five notes raga musicians use to improvise. Manik’s selection of songs follow on thematically from the aforementioned found sounds in a progression that he describes as “putting music on and having a drink, hearing a party from a distance, going to it, then coming back inside and playing some sad/fuck music.”

The mix comes accompanied by details of a similarly textured and disparate work-in-progress, a painting featuring figurative studies taken from famous and recognisable Rembrandt pieces. Here, layers of realism and abstraction create a hum, fuzz or vibration of representation.** 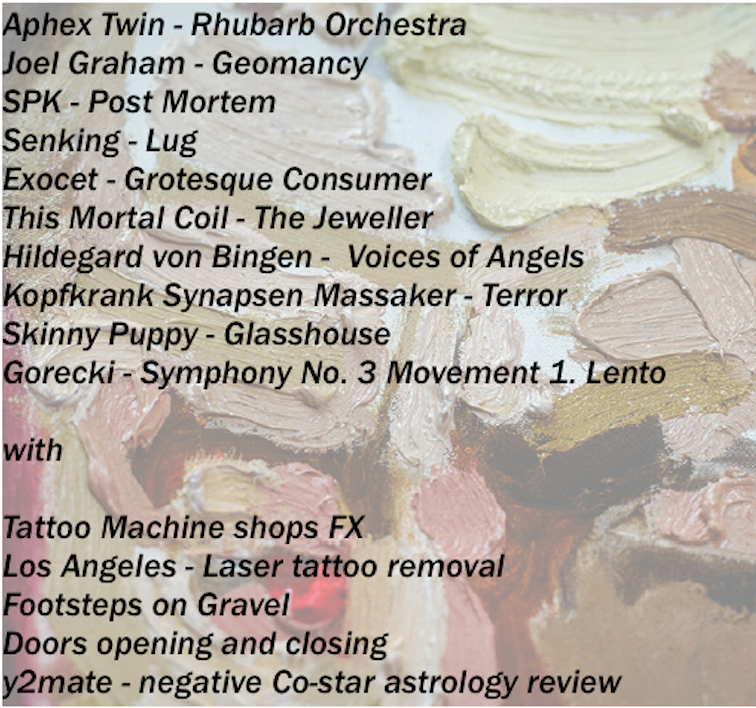 Gian Manik’s National Trust is on at Port Hedland’s The Courthouse Gallery, running July 27 to September 22, 2018.