Artist-producer Lars TCF Holdhus and I meet briefly at the C0 FE E2 57 4E E1 77 78 1E B7 C5 ED 25 0C F5 22 event at London’s Cell Project Space where he presented a series of t-shirts made with designer Victor Robyn that carry on their fronts different messages written in code and only knowable by the artist himself. I think about people entering a space and leaving it with their knowledge of something kept at bay, levelled and distanced. You can pick which t-shirt you want based on aesthetic taste but you know that you don’t know what it means. Around the room in the corners are four speakers playing a soundtrack that is at times delicate and, as I write in my notes, like a baby alien coming to life, and at other times intense and difficult to listen to.

Holdus and I speak on Skype the following evening and he laughingly tells me that people were carrying things for him that could be, for example, his passport details. We speak about the potential inherent in the moment of reveal: that even without disclosing the coded cryptography and the message itself, the power and weight in the work is like, as he says, “carrying a box that is locked”. 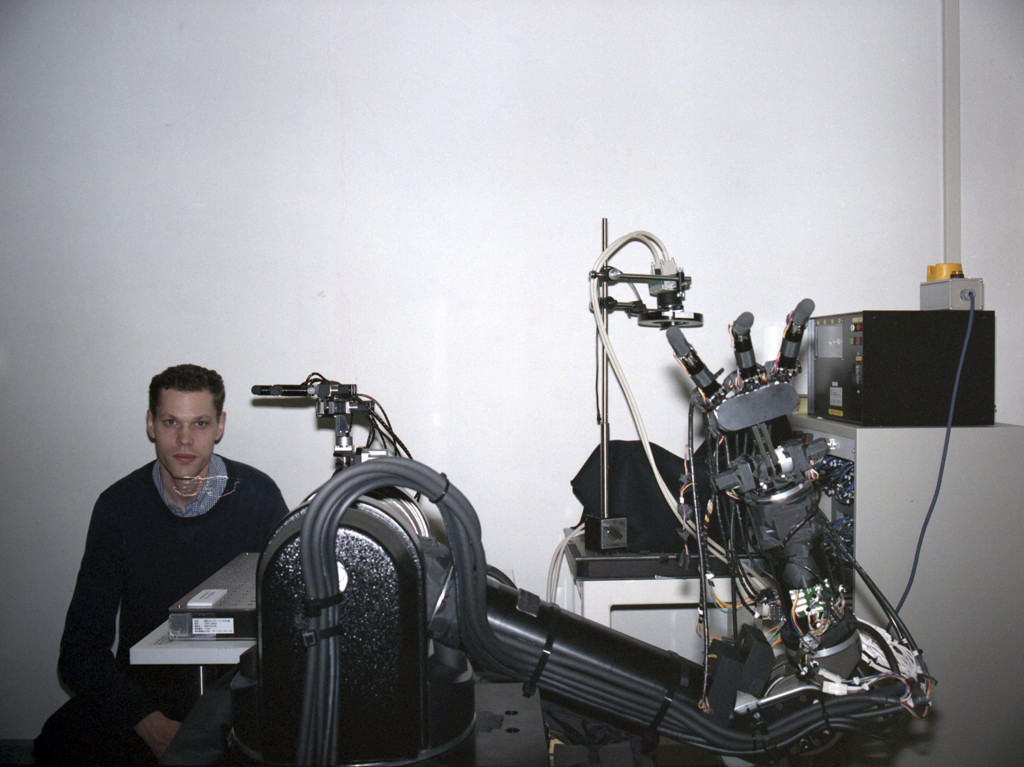 There is a notable amount of description online around or underneath music tracks by Holdhus that have been embedded into various download sites. Contradictions like ‘cold’, ‘human’, ‘deep’ are all used in small paragraphs. It’s a bit like when people try to understand and find words for what something tastes like. You can’t truly describe it, you can’t get that close. His tracks are titled in code, like the title of the event at Cell Project Space. It makes me wonder about the act of searching for something online and following deposited parts as though someone was leaving a powdered trace behind them. So before exploring his sounds, his automatic interview bot and image series in worded detail in my mind, I wanted to speak with him personally to understand something more of the distance and thus depth created in his practice by his work and his titles.

Interestingly, explanation and clarification are things that the artist is not that interested in. Several times he tells me he has no opinion on whether or not people need to know the encoded meaning of his t-shirts and also the work-process behind his imagery or music. There is no set or patterned system employed in relation to the information surrounding his work. It’s not like the image or music (the surface, which, in Holdus’ work is actually a deep cross section) is encountered in one space; the writing around it always in another. He makes his own system of information sharing for each work. It’s addressed and received uncomfortably because the flow of that information is disconnected and the systems unknown but, as Holdus says, it’s much more interesting this way.

I think about the comparison between Holdus’ practice and cryptography, and making and experiencing art in general. As he tells me, “I’m not so much into communicating something. I like art as a way to delve into something deep.”

The aesthetic of this kind of practice is intriguing: how and why does it have a certain stylistic quality if it is mainly a collection of actual data and visual research brought forward into the foreground of the image or the music? Some of Holdus’ pieces are soft and beautiful. At Cell Project Space the black t-shirts hold a font that is in dark grey Italics, the interview bot comes back with the occasional medieval, organic font to front its coded reply…

…Lars TCF Holdus: I don’t know; I mean there are some that are less beautiful.

LTH: Yeah this is an outline of my handwriting. All my work is very inter-referential, its chaos for people to try and understand. It’s basically me just having fun.

Could you talk a bit about the idea of creating depth in relation to this image? The ‘T, T, A, A, C, C’ letters make sections on the print and let you understand that there is something going on behind what you are seeing. To not know something, you still have to know that you are not knowing something.

Lars TCF Holdus: Yeah, you have to understand at least some parts of it to understand that something actually exists. I build systems like this, and there is always something inside the work that you will never know exists.

Physically? I mean, not just research behind something that doesn’t make it into the image…

LTH: For me it deals with language and the basic mutual understanding of language and codes and signs and signifiers. It interests me to mess with that. In art you have to agree on so many aspects of language,

LTH: Yes, so there is a very simplistic language in use. It doesn’t interest me much, because everyone’s like, ‘look, that’s what it means because you and I know share a basic understanding of meaning (I get your work and I get my work)’. It doesn’t expand the language of art. My goal is to make my own system that just refers to itself.

Perhaps this is what makes the feeling of depth underneath your works. Underneath and behind, rather than in the moment of interpretation that goes back into the world.

TCF: I don’t have the need to tell people what to do or how to think. I’m more interested in reflection, so that people make their own mind up about things.

Can you define reflection more in this way?

LTH: I don’t want to be too directive. I don’t believe in a world that functions by this principle (I haven’t seen it work like this). I’m just going to present what I have.

Could you talk more about the direction of exportation then, in relation to this? I mean, also that maybe other people continue to do the work in their own mind/space after or upon it being presented, like a song or something.

LTH: For the project at Cell specifically, it related to these guys in the 90s that produced t-shirts that people could wear with cryptography on them, which was illegal to export from the US. So my project was basically to say, ‘look how ridiculous it is to make this illegal’. And then [David] Cameron was recently suggesting to re-introduce the laws that would open backdoors into all of this. So the project was also about the idea of history being repetitive, or actually, rhyming. The t-shirts we made were kind of an homage to the original ones…

… an homage to code in code. Then t-shirts (in general) get left as these weird things, it makes you think that they have power, and potential future power or something… I suppose this is why in the physical space at Cell you had them hanging around the room, both as though they were merchandise in a high street/pop up shop but also ghosts. What about if someone takes an image of the t-shirt so that the cryptography is inside a photograph as well, is the code’s power just in seeing it?

LTH: I mean, no. Because I have all the keys to each message on each t-shirt. They are all different.

LTH: One could carry my passport number…

TCF: It’s about awareness of these underlying systems surrounding us all the time. The titles to my songs are like this. The songs are all encrypted and could change meaning if I wanted to say what the codes would really mean.

And also if you decided to change the meaning of the encryption keys themselves. The potential is the thing.

Do you feel relief when people have your codes?

LTH: No, I feel weird. I feel really uncomfortable. It’s very strange to make something that people wear. I’m not used to this: that people have a personal relationship with these things that are really personal to me. I guess this is a part of fashion that people never really think about. What of the fashion designer gets embedded? People offer you a lot of trust.

So what happens when the code on the t-shirt fades in the wash?

Lars TCF Holdus is a Berlin-based artist taking part in the PAF Festival of Film Animation and Contemporary Art on in the Czech city of Olomouc, running December 3 to 6, 2015.