In our second video with Polish artist and performer Ada Karczmarczyk, she speaks to Natalia Sielewicz, curator of recent group exhibition ‘Private Settings, Art After the Internet’ at the Museum of Modern Art in Warsaw, about icons, pop culture, Christian evangelism and using the internet as a tool to inform and attract followers.

The devotional image of an icon, be that of a religious, pop or historical figure, is representative of a particular moment in history. Iconography is a long-established art form in various faiths across the globe, particularly Christianity and the figure of Jesus as the embodiment of God. The institution could be said to be the first and arguably most successful promotional machine in Western history.

With the advent of broadcast media 20th-century pop icons such as Elvis and Marilyn Monroe were constructed and sold to the masses through movies, records and advertising. Madonna and Michael Jackson catapulted into fame via MTV. Nowadays many contemporary public figures, some of which are soon-to-be marketed ‘icons of their generation’, begin life and are mediated through networked online environments such as Instagram, Facebook, Twitter and YouTube. In this casual setting, centred on the performance of authentic individuals, the line between the public persona and private thought becomes blurred. All are cast out into the web to be liked, shared and commented on.

In this arena, Karczmarczyk has been presenting her work through a dedicated YouTube channel since 2011. Audiences can follow her path from a crisis of identity and search for meaning that leads to a spiritual awakening and reconnection with the Catholic faith of her Polish upbringing. Watching it as a body of work, you can also see a consistent awareness and experimentation with the role of a performer, the use of humour, physical comedy and a ‘pop colourful’ aesthetic. As a child of a post-Soviet society, her videos are an overload of glittering and attractive consumptive objects, once adored by Karczmarczyk and now employed for the purpose of the Christian mission. 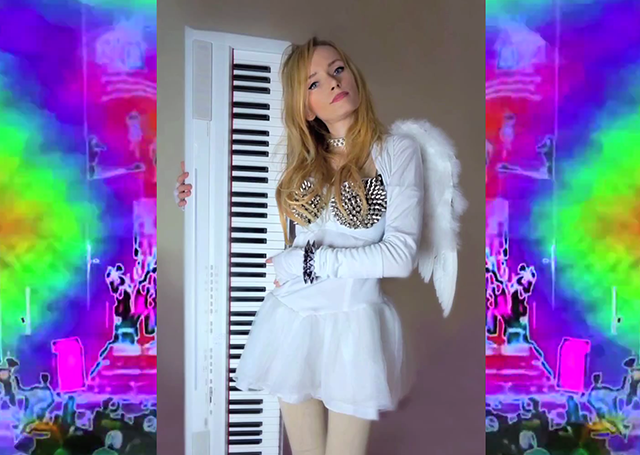 Karczmarczyk’s work is often received by predominantly agnostic or atheist art audiences as an ironic statement on Christianity rather than the closely held belief of the artist. As a viewer, her mission or will to convert you is made plain—follow your spiritual leader Adu to the meaningful (Christian) existence. However, these two lines of irony and honesty are forever blurred when presented in such a context as YouTube with all its many layers of meaning. This can be confusing, even shocking, but at all times entertaining. Perhaps, the central question of her work is less ‘Do you believe?’ and more about the nuances in the language of online representation.

This video is part 6 in the series Money Makes the World Go ‘Round – exploring art and artists in a global market in collaboration with Video in Common—to publish at the start of every second week from the last day of March to June, 2015. It features six artists from cities around the networked world. **

Watch the video embedded above or see here for Part One.

This project has been made possible through the generous support of Arts Council England.