Artist Harm van den Dorpel is opening another solo show called Loomer, this time at West Hollywood’s Young Projects, running from January 23 and for “a month at least”, according to the artist.

The press release reads like a confession: “When writing texts for my own exhibitions, I used to pretend and write them in the third person: ‘the artist’, ‘Van den Dorpel’, ‘he’. An outsider perspective suggests neutrality, and protects me from explaining my own work.” He – this time it really isn’t him writing it – writes about his education (studied AI, graduated art school), his insecurity (“I still hesitate to call myself an artist…I prefer to say I’m a computer programmer”), his views on ‘post-internet’ (“I never minded the label, but know it is not sustainable”).

Nearing the end, his text veers into the poetic: “I’m leaning over, approaching too close, breathing over the edge of my own screen. Small drops of spit land on it. There is still a potentiality in the ‘new’, regardless how quickly it condensates into a ‘known’, which then slips through my fingers again.”

Meanwhile, the last few lines provide concrete information about the nature of the show, namely that it is “an array of formerly unmaterialized poster collages, presented in space with sculptures and animations, many of which span the past five years”. 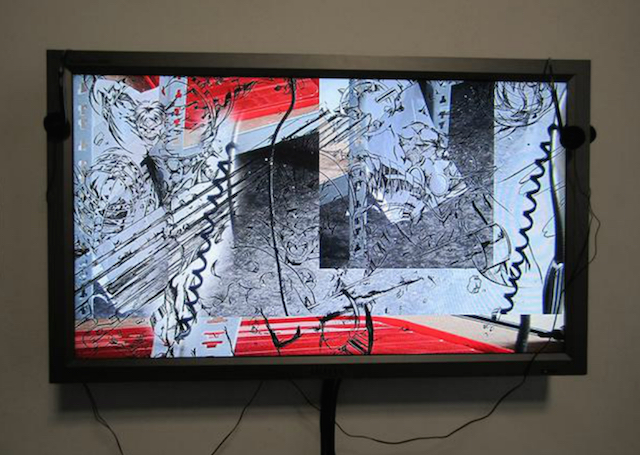