For someone that never lived there, the US can be a very strange place. As an ostensibly secular country built around the supposedly rational ideology of democratic capitalism, a drive across its vast and varying landscape reveals a space steeped in its own mysticism, manifest in any form from the omnipresent evangelism of the bible belt to the rootless, new aged occultism of California. Somewhere between those two theologically and geographically oppositional, though equally extreme, poles lies Denver, Colorado. It’s a city that boasts the largest airport in the States and the focus of ‘post-internet’ superstar Parker Ito’s latest solo exhibition Part 1: Parker Cheeto’s Infinite Haunted Hobo Playlist (A Dream for Some, a Nightmare for others) at LA’s Smart Objects. 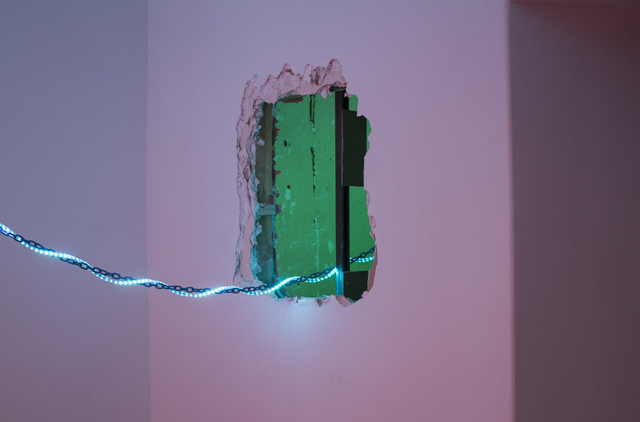 The thing about Denver International Airport is that it’s the subject of widespread criticism and conspiracy theories for its bewildering public art collection. There’s a bright blue 32-foot tall sculpture called ‘Mustang’ –glowing red-eyed and nicknamed ‘Blucifer’ –that killed its creator Luis Jiménez in 2006, a bunch of Masonic symbolism and a series of terrifying murals essentially depicting the Apocalypse. One of these very images features on the Smart Objects rooftop; a painted reproduction of a mysterious gas-masked fascist figure, impaling a white dove and leaving a trail of dead babies behind it, spanning the length and width of a wall. It’s the last thing you’ll see in the exhibition extending across the gallery’s two storey building –from the shower and toilet on the ground floor, to a couple of the private bedrooms upstairs, the laundry, and finally the roof.

On entering Smart Objects –with viewings by appointment and its window shutter rolled down –there’s a gaping, potentially landlord-enraging hole in the wall between the exhibition space and a disused elevator shaft. From there trail some intertwined LED light strips to be pinned to the ceiling and suspending a neon sign saying what looks like “yodirodiray”, a couple of bouquets of Ito’s familiar multi-coloured flowers from 2012’s The Agony and the Ecstasy and all four bathroom walls plastered with print collages of an online aesthetic that includes crude manga-like imagery, an illustrated hand holding an illustrated iPhone and spiky-fonted text reading fragments like “french blowjob” and “Nicolas Cage at the after party”. Across the living space above –also leased by the gallery but rarely, if ever, open to the public –hangs a sort of triptych split across rooms of Emmanuel Frémiet’s ‘Jeanne d’Arc’. The French hero and British foe clings to her sword above the washing machine, is obscured by chains (or is it links?) in one of the bedrooms, and then finally replaced by a stylised ‘self-portrait’ of Ito himself looking like the Angel of Death in another. 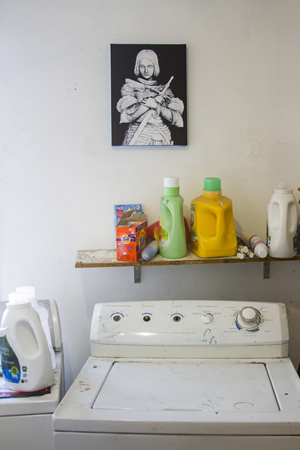 None of this seems to make logical sense, but on reflection, it kind of does. The ambiguous persona of Parker Ito –otherwise known as Parker Cheeto or “Parker Speedo, Parker Frito, Parker Dorito, Parker Ego and Parker Burrito” –trades on eschewing any kind of solid concept to his work, while shrouding the image of the artist behind it. The abstracted figure of ‘Parker Cheeto: the Net Artist‘ mimics the nonsensical nature of the global internet viewed through the lens of stoner conspiracy theorists reading meaning into the meaningless and constructing their own doom-y realities blurred across online and offline space.

While I’m sure I’m missing something when witnessing the high top hat of a dark green human-like sculpture hanged by fairy lights in the elevator shaft and resurfacing as a cartoon silhouette in the bathroom, the depiction of this particular apocalypse that, as its title suggests, serves some and scares others, is a fairly revealing one. Because, New World Order or not, all you can really do in the face of uncertainty is make sense of it how you can. **

Parker Ito’s exhibition Parker Cheeto’s Infinite Haunted Hobo Playlist (A Dream for Some, a Nightmare for others) is on at LA’s Smart Objects, running May 30 to July 27, 2014.

All images: Parker Ito, Parker Cheeto’s Infinite Haunted Hobo Playlist (A Dream for Some, a Nightmare for others) exhibition view. Courtesy Smart Objects.