2011 looks like another year predestined for the release of psycho spasms (dub, pop, electro…) from all corners of the world (west coast, balearic, scandinavian…)… Cut Copy, Animal friends,  Battles… and many more of similar leagues… M83, Panda Bear, Explosions in…, Fleet Foxes…We’ll have to start filtering mercilessly sooner or later all that horrible amount of upcoming LPs.

But while we wait for “2011’s album of the year” we already have our March fix: “New History Warfare Vol.2: Judges”, which has already been release elsewhere but in the UK (tomorrow is the date). And we have to say that none of the “most anticipated, most wanted 2011 albums” lists included this one. Maybe no-one was expecting this bomb from the Michigan-born Montreal-based saxophonist. 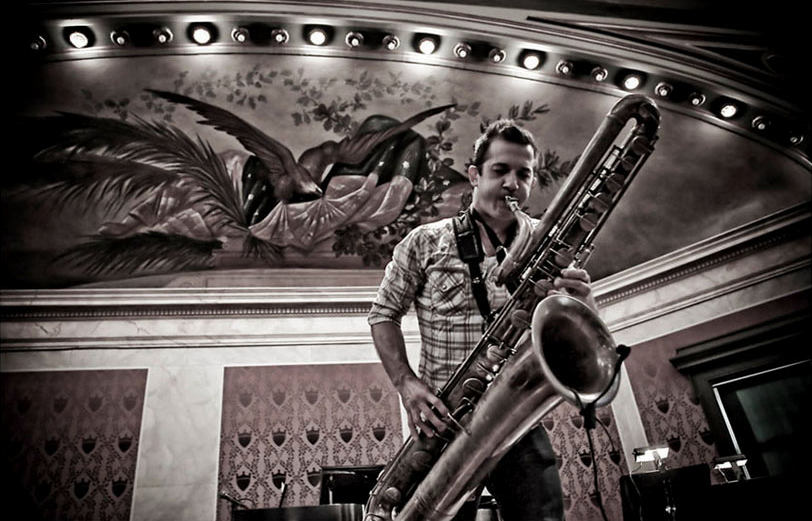 Colin Stetson who’s (maybe, at least to us) more well known for touring with Arcade Fire, Tom Waits, LCD Ss or Bell Orchestre had previously released an unnoticed first part (and first solo album) 3 years ago, barely anyone payed attention to this master of horn & bass saxophone whose first work seemed even more hyperactive, more explosive, groovy and maybe more experimental; but at the same time less drinkable & well-meant to be come an “album of the year”.

In this second part “Judges” Colin continues the evolution of his wind machinery to a much richer, complex & organic material including the voices of Laurie Anderson & Shara Worden. We don’t know how many microphones & contact mics Colin used for his first album but for “Judges” apparently he’s planted 20 of them all across the recording studio.. inside the horn, on his neck, across the room… so all those breathes, pulses, key strokes & instrument mechanics could become the consistent and catchy composition “Judges” is, who said psychedelic synthesizers where needed?

Mr Stetson is famous for his capability or performing & recording these amazing pieces in single takes thanks to his “circular breathing” technique (which basically & simply means to play continuously with his mouth while breathing through his nose… as if it were that simple to play non-stop for over 5min). And without needing any loops or overdubs Colin still has asked for the mastering mixing knowledge of Efrim Menuck (rom Godspeed/A Silver Mt Zion) and Ben Frost, both successfully helping Colin out to gracefully blend this masterful piece.

As the press release states the “percussive valve-work and reed vocalisations” do certainly make of his second solo album a perfect mix of contemporary classic bringing all those cold metallic sounds to the most harmonic & sensible level any human being could ever imagine. The plasticity of the album should also please both purists & newcomers; you could easily take Red Horse (Judges II) and place it in a dancefloor or take the Dark Lights remix for an anguishing thriller soundtrack, immerse yourself in the colorful drip of notes that do never fall too heavy or too stereotyped for a single instrument album.

NHW2: Judges will be released tomorrow in the UK but you can already download it (buy it we mean) via Constellation, but of course, do nothing without judging first…