Suspended in motion, Keira Fox and Ellen Freed of collaborative performance project, New Noveta squint their eyes towards the sun. They wear dark matching outfits in a similar colour palette as the grey water and grass surrounding them, as depicted on large prints mounted on the walls of Berlin’s Sandy Brown.

The photos at Zene Zemlje, the duo’s first solo show running March 12 to May 1, were taken during a residency in France. “The pictures are quite ecstatic and express female empowerment,” Fox explained in an interview with Artsy last month. With that in mind I silently wait, standing on the white industrial plastic that covers the Sandy Brown’s floor by a small pool. Surrounded by other Berlin Gallery Weekend guests on April 30, I suspect that their second performance in the space, marking the end of Zene Zemlje, could get messy.

Wearing dark red, cotton dresses and beige heels designed by Louis Backhouse and Dean Wellings, Fox and Freed storm into the space from the outside. Their hair is pinned up and their lipstick matches their costumes. Tied around their waists are a pair of scissors and see-through plastic bags, filled with fish eggs of different sizes and colour. If it weren’t for these strange particulars, along with their aggressive movements, they could easily blend in with the crowd gathered outside watching, protected by Sandy Brown’s large windows.

Bumping into each other, Fox and Freed head towards long bamboo poles attached to three corners of the space with thick threads. Collaboratively but chaotically, they start to toss the sticks around, leaning on each other for support. They yell confusing commands in high-pitched voices that temporarily overtake the intensive soundtrack that has been playing throughout. Neither the audience situated inside the space, nor the pool of water are in any way an obstacle to New Noveta completing the task of constructing a loose installation out of these staffs. At this point the room has been vaguely divided by the bamboo poles unevenly hanging across the room, above the body of water and through the crowd. 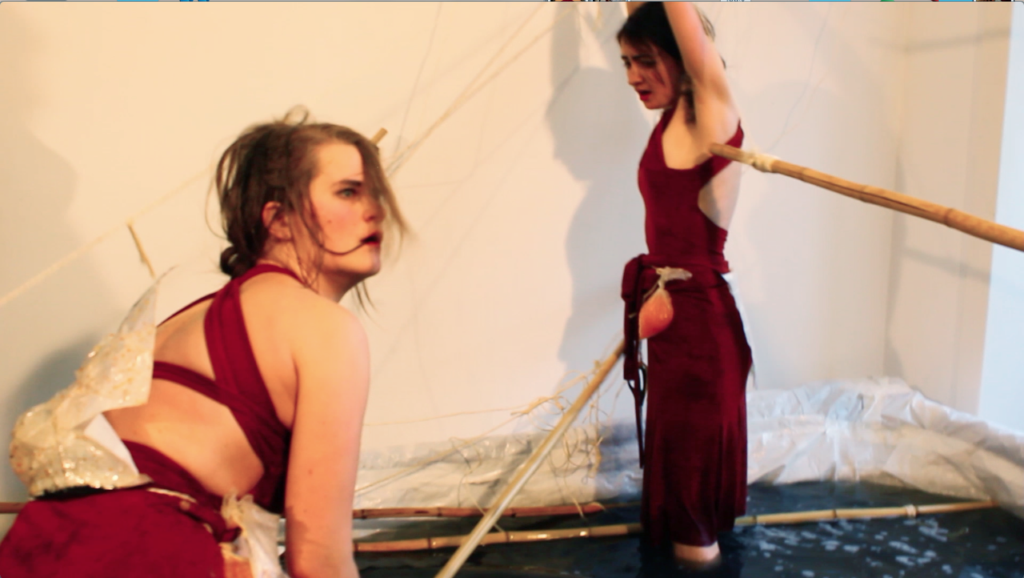 There is nothing dignifying about Fox and Freed’s movements, each gesture is driven by anxiety and ambition. Like small girls in their mother’s heels they stumble around. With no guidance on how to survive under the enormous pressure of contemporary society. With scissors in hand, they cut off each other’s bags and clothes, the collaboration has become deconstructive in parts and they have given up on existing rules and have constructed their own.

After cutting down the multilinear installation, Freed and Fox are now stripped, by each other, down to their leotards; their torn and crumpled clothes gathered with the poles in a pile on the floor. Crushed fish eggs cover it, along with the darkened water from the pool, causing the scene to become dangerously slippery. As before, the surroundings do not stop New Noveta from performing the task at hand; of carrying the sticks outside where they leave them beside the door.**

New Noveta’s Zene Zemlje was on at Berlin’s Sandy Brown, running March 12 to May 1. Their final performance of  two was on April 30, 2016.