Before This won’t take long at Paradise Garage, Oscar Tuazon removed three walls of the gallery and reinforced two corner support beams with concrete. With a metal cable he tied the remaining beam, standing between two removed walls, to a tree about thirty feet from the space, with an electric winch at the base. Tuazon was preparing to pull the rest of the structure down in one fell swoop.

Paradise Garage is a space situated primarily in the backyard of artists Liz Craft and Pentti Monkkonen, in a converted wooden garage built in Venice Beach perhaps 100 years ago. Since late 2012, it has hosted exhibitions by local and international artists that seem to skirt around Craft and Monkkonen’s nostalgia for alternative ideologies shared by artist networks of yesteryear. This is something they have in common with Tuazon, who uses construction materials and processes to define a habitat, whether rerouting what a home looks like or happening upon an incidental space during construction. Tuazon has often flirted with destruction of the structures that he addresses; this, however, seems to be the first time he has desired to absolutely level one, and also the first time that he has not built the structure himself. 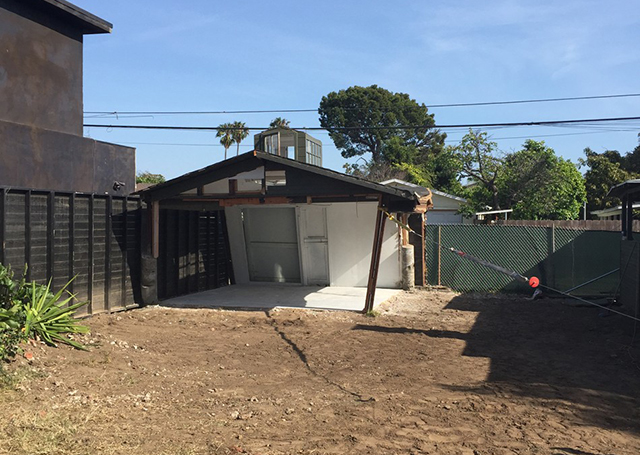 This won’t take long was scheduled to take place sometime between 3 and 5 pm on Saturday April 11. I arrived 3:40 to find a small group of collectors and stragglers waiting around at the barbecue, a few feet from the tree and the winch. The open face of the gallery stared back, its white walls at odds with the rest of the site, mid-renovation. A sliding glass door was still there, facing the alleyway, its Paradise Garage vinyl now signifying a larger space, conflating interior and exterior. People dripped in and mulled around and the construction site, all smiles and European sunglasses, shielding them from sausage smoke and sunlight alike. At one point Monkkonen piped up and made a joke about performing the action at 4:20 (a widely recognised time to smoke in the marijuana counterculture), which eventually became a reality, for lack of better reason. Everyone nervously huddled around the tree and looked at the gallery, uncertain as to what would happen. As if he were duelling with the space, Tuazon kneeled down by the tree and gave the trigger of the winch three or four clicks. First there was a crunchy dry-wood-cracking sound, then the beam lurched slowly toward the audience with the rest of the building in tow. Like the body of a person crouching down, the roof remained its even, triangular self until it hit the deck, when it flattened and exhaled its last breath, setting off a plume of dust. Up in smoke. Remarkably, a dog-kennel sized skylight that Monkkonen had made from a few old doors and windows at the peak of the roof remained entirely intact. It reminded me of that old maxim, don’t throw stones at glass houses. 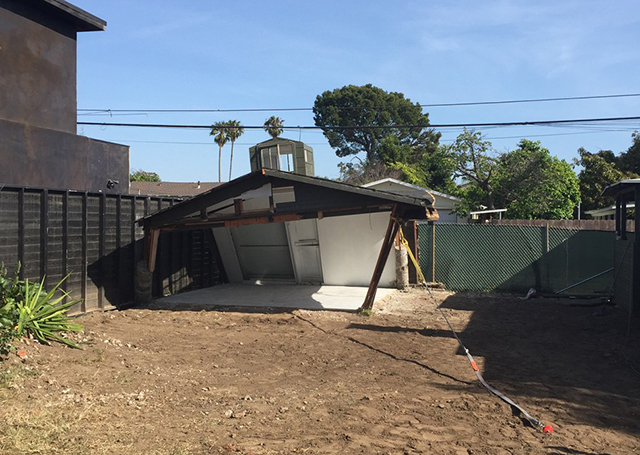 Cheers erupted at the graceful fall, and jubilation floated awhile with the dust—the final breath of the building echoing a sigh of relief that the choreographed collapse had gone so well. Collapsed as if it were a flat-pack box, the garage-come-gallery rested, exhausted, depressed, relaxed, laying, spent. Whatever it had evacuated was now mingling with the crowd, a building exorcised, a popped balloon, still tied to the tree by the limp winch, with the ghosts from inside now working the party.

In past projects, Tuazon has built his own structures to destroy. But in this case, the space was constructed equally by the history of the program that Monkkonen and Craft had curated—and the subjectivities of those artists—as it was by the existing concrete and wood of their garage. A space personified, living parallel to a family and holding the history of exhibitions. As the gallery folded and flattened, the space collapsed a period of time. This won’t take long represented a period at the end of a sentence for the space, and its fall resembled the hectic unregulated deconstruction practices of suburban past for which you now need a license. When the gallery left itself, it continued to exist in the memories of those present, and embodied by those involved in its program. There was no word of what was to come of Paradise Garage—at no point did anyone say that it had ended. With the inherent before and after in the promise that This won’t take long, and the liquid form of the ongoing programme, Tuazon poses the question, when is the space? 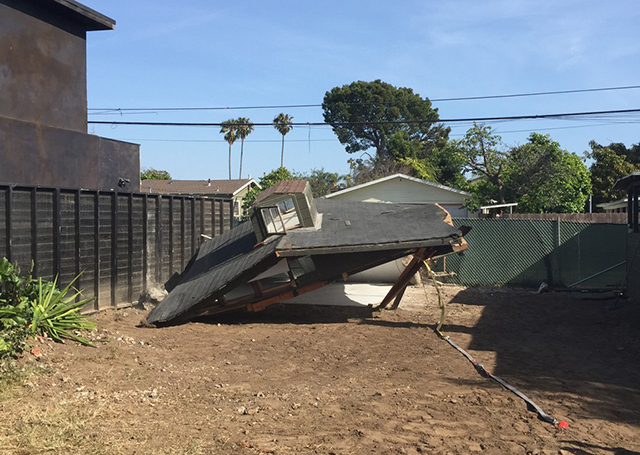 Images of structures falling tend to have a life of their own. With the graceful twist and fall, audio of the artificial camera lens of a few personal devices clicking could just be made out. It brought to mind images of other structures falling that often mean more than one thing despite one interpretation eclipsing any other. When the statue of Saddam Hussein fell in Baghdad in April 2003, Secretary of Defence Donald Rumsfeld told reporters: “The scenes of free Iraqis celebrating in the streets, riding American tanks, tearing down the statues of Saddam Hussein in the centre of Baghdad are breathtaking. Watching them, one cannot help but think of the fall of the Berlin Wall and the collapse of the Iron Curtain.”

The collapses of actual physical structures corresponds with the collapse of time, as they are remixed, repeated, and compared to the past. They purport a false clarification, an artificial conclusion. The awkward fall of the Saddam statue did not actually signify the liberation of Iraqi people in the midst of an ambiguous war and an American occupation that lasted until 2011. It was later exposed that the toppling itself was an event largely staged by US forces and encouraged by the US media’s creative imagination and the patriotic public’s will to believe. The footage, perfectly framing a slice of chaos, was primed for a “visual echo chamber” that eventually slowed time, as TV networks shared the same footage, each station repeating the footage sometimes more than every 5 minutes, invoking the word “historic” repeatedly. If the toppling of buildings are staged in war as they are in art, what is the distinction between war and everyday life in the metropolitan West? In The Colonial Present, Derek Gregory recalls the sensation, which Don DeLillo described as Medieval violence, of September 11 “touching” the metropolitan West, “through the confusion of raw, immediate, and unedited images, through replays, jump-cuts and freeze-frames, through the jumbling of amateur and professional clips, through the juxtaposition of shots from multiple points of view, and through the agonizing, juddering close-ups, this was a cinematic gaze that replaced optical detachment with something much closer to the embodied, corporeal or “haptic” gaze.”

Oscar Tuazon’s This won’t take long at Paradise Garage from aqnb.com on Vimeo.

Samson by Chris Burden, The Los Angeles County Museum on Fire by Ed Ruscha, and more than a few Michael Asher works might provide an art-historical precedent for This won’t take long. In each work, an institution is depicted being destroyed. Perhaps these artists (men, that were all at some point based in Los Angeles/insert psychoanalysis here) have a fantasy for a world where they are allowed to lie down rather than build something, as is expected of them. Perhaps it is war, and they are conquering. Most likely, they are soccer players, falling to generate a free kick, as the crash of the institution echoes through an art world audience ever-ready to collapse its own empires. However, for these empires, unlike the fall of Rome, their collapse feeds their stamina, like America. Each chip on the institution’s shoulder makes it a more reflexive animal, ready to devour the next legion of critical soldiers. As the institutions become aware of their weaknesses with each wave of criticism, they become stronger, streamlined, resilient, clinical, surgical. At the end of the day, Ruscha’s fire is accommodated within the walls of the institutions it critiques.

Tuazon once made a bed for his home in Paris that he slept in from 2007-2010. One day, he and his family returned to find that there had been a fire that started in the apartment below them, and they had to move. Nothing was too damaged, but the bed, custom-built for the room, no longer served a purpose, and was subsequently shown and bought by a large institution. The bed, apparently able to convert into a stage, has the special aura of an object that visibly possesses the history of the people who once used it. Sometimes, but not always, institutions are where art goes to rest. **