Only Youtube statistics can tell how many times I have watched KT Spit‘s video Brenda Walsh, I’ve lost count. In my mind this music video belongs to the avant-garde, for the Melbourne-based performer, artist and musician who will be releasing her first solo album, Combulotion, at West Space on April 10, it is something of an accident. In the video, there is fragility about KT Spit, rolling around on her bedsheets with wide-eyes and Rapunzel hair, singing a story of intimate familiarity with the quality of a first time. Her words fall fresh and with striking immediacy, at times bending perfectly, at other times stumbling discordantly, around a melody in the process of being created. Awash in a drizzling treble, the insistent beat marches on. KT’s lyricism wields an awesome brutality, this is not a painless obsession.

The experience of watching this video reminds me of my experience of watching the musical, ‘Life and Times Episode 1’ by experimental ensemble Nature Theatre of Oaklahoma. The three-hour+ performance is based on the tape recordings of one woman’s unexceptional life, performed by a singing dancing chorus, verbatim –’ums’, ‘buts’ and ‘likes’ included. Following initial feelings of joy and interest a certain discomfort sets in, this gives way to irritation, then boredom. About a third of the audience leaves, but soon after, the feeling flips. The cringe, the realness, the relentlessness of this somewhat unsolicited intimacy becomes addictive. 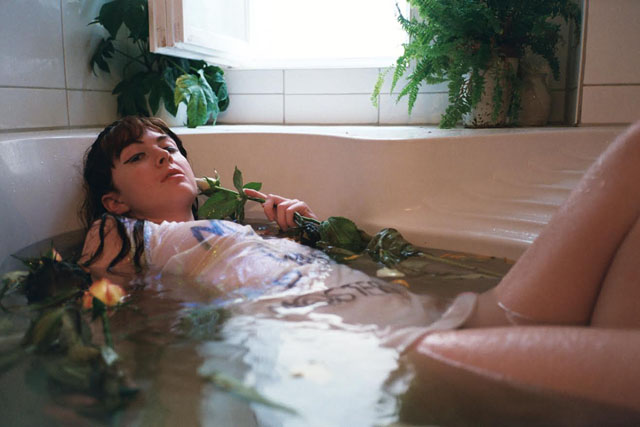 After viewing KT Spit’s Brenda Walsh for the second time, I wake up with the lyrics trembling in my ears and want to watch the video before doing anything else. I show it to friends with expectant urgency, “what do you think?” And I realise, she’s got me. This does something inexplicable and deep to me. It works on me like pop does, and yet it is unintentional pop, it wasn’t made for a mass audience. I ask KT about the video and she tells me that it is an actual love letter. “I had this beat and I just had to get it done and it just had to work,” she tells me over Skype. “I just had to do it, it had to be finished for someone I loved… So I guess it is a melody that is being revised as it is being recorded.” Her deadline, Valentines Day.

The creative force of KT Spit has been in steady development for more than a decade, up until now the bulk of what she has created, music, art, social and cultural interventions, is ephemeral. Descriptions of her self-performance slide between post-irony and new sincerity, yet her combination of frontal honesty and carefully constructed artifice holds allegiance to neither category. On the internet, she might look like a cam girl, it is a riff. Her selfies aren’t blunt self-promotion, their very crudeness pulls at the elastic possibilities of the exploitability of a person’s image online, and everywhere. “When I have felt really fucked up or been sick I find it fascinating and kind of addictive how good I could look in a picture on the internet,” says KT, who has posted selfies fashioned as pop-up advertising with evocative captions like ugly girls begging for dick and ugly chick with no value used for extreme oral. “Also, from having weird dysmorphia stuff myself, where I might be like, ‘I feel disgusting’, that is not real but then I see this image, is that real? Where is the place for women to be ugly online…” 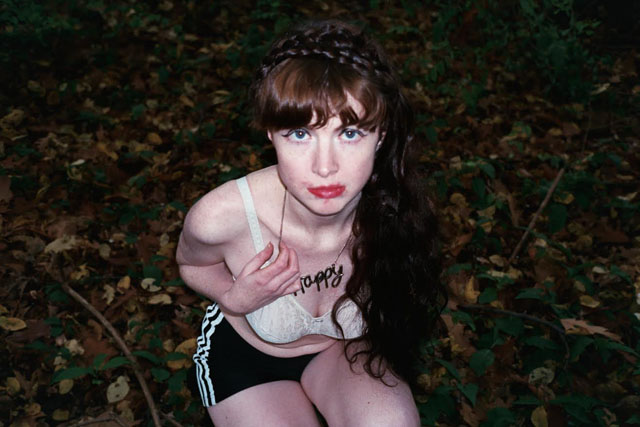 In other manifestations, you may be confused to find videos of KT caught up in teen-drama video-blogging, call-outs, ineloquent self-righteousness and weird voyeurism. They are remnants of We are Your Friends, an interactive installation for which KT directed 56 videos that were exhibited at Western Australia’s PICA in 2010. Offline, in her capacity as activist/social-worker, KT co-designed an education program about domestic violence and online sexual harassment, recognising its forms and unpacking victim blaming positions that have been developing around the alienability of digital images of an individual online. “People’s personal politics in relation to online relationships haven’t caught up to the standards that most people insist upon in their relationships offline,” says KT of social dynamics endemic to internet culture. “For example, so much unquestioned victim blaming around sexting or phone hacking, the idea that you can’t not look at leaked nudes.” A twist on the subject, KT poked into the decomposing immortality of online profiles with her artwork, Come to my Window, an interactive web platform she designed for West Space in 2012. But primarily, KT is a musician, and lately, she is making pop.

I saw her perform in Berlin late last year. She showed up with her laptop and an effects pedal and played alone. When the unit ran out of battery she shrugged and carried on with her set. At one point, she knelt on the dirty venue floor to sing “and I know, and I know I am in this all alone, I’ve got fake powers my face takes hours I like to, put on a show” and as her physical surroundings seemed to suck away, she filled the vacuum around her with this incredible raw intensity. The first time I saw her singing on her knees was the first time I ever saw KT Spit. She was fronting hardcore band, The Spitz, and was probably still in high school. With her face screwed up to punch, she looked like a punk manga princess screaming, “day in day out nothings gonna save me, day in day out nothings gonna change me!” Shuffling out the door after the show, I overheard a man say, “It doesn’t make sense, all that emotion coming out of this little girl. What does she have to be upset about?” Across media, traversing genres, KT Spit maintains a beautifully awkward and intensely personal yet widely relatable catharsis. If the ferocity of her ‘girlishness’ seems incongruous, you just don’t get it, yet.

KT sings pop like a French mani picking at a glitter encrusted scab, her lyrics hang open like wounds. It is very satisfying. “I don’t think there has to be such a split between girlishness, cuteness, fun-ness on one side, and intensity. Sometimes it is almost defiant,” says KT. “I remember when I was writing ‘Angels Again’, I had the song before I’d made any of the beats or the music and I deliberately used lots of pitchy cute treble sounds. I just wanted there to be a song about women’s and girls’ extreme depression and despair. I felt like that is the reality of my life and the reality of a lot of peoples’ lives. And there is a frivolity and superficiality that is assigned to cuteness and hyper-femininity that really pisses me off. But then I wonder if I somehow hold to it, a little bit in a way, even if it doesn’t feel entirely genuine, which I think is still fine and still real, but whether I am performing it sometimes, a little bit defiantly.”

A thread traces the synthesis of KT Spit’s interests, her self-development and self-doubt to their articulations in her album release. By way of explaining the meaning behind some of her lyrics and song titles, she shares a google doc with me. It reads like a series of poems, under the album’s title, Combulotion she writes:

“…the state of being on a lemon and magenta rip curl boogie board @ the end of yrself, saving no power aid for the swim back, a disease of being too girly, the internet when no one in on it/the internets only feeling.”

For those of you in Melbourne, Australia, you can join KT at the official Combulotion launch on April 10, where she will also be debuting the video for ‘Hope St’, my favourite KT Spit song. In another juxtaposition of distance and intimacy, KT invites everyone elsewhere into her bedroom for her online album launch. “I guess I just want people to come to me to see me,” she says, “I always found it hard to feel at home by myself, but I also find it hard to be myself when I don’t feel at home…”. **

All images of KT Spit by Chloe Alexandra.