Walking into the Ed Fornieles Modern Family show at the Chisenhale Gallery is like being transported to a cartoonish version of American suburbia complete with barbeques, picnic tables, Jacuzzis and vibrating beds. As an expansive and complex installation, it takes a while to adjust to the hip-hop thud ricocheting off the walls, the dimmed and flashing lighting, and the plasma screens displaying random images appropriated in real time from the internet. Littered with ephemera associated with family life and domesticity, it resembles a home post civil war.

The exhibition is LA- and London-based artist Fornieles’s first solo show in a UK institution. Enacting a collapse between the virtual and the real, it builds on earlier work, using the internet as raw material and recapitulating the collected data back into sculpture, installation and performance. ‘Dorm Daze’ (2011) was a Facebook sitcom semi-scripted by Fornieles, creating a fictional American high school with fake students formed from the ‘scalped’ online profiles of real people. ‘Maybe New Friends’ was a website populated by Twitter bots. Another installation, ‘Despicable Me 2’ (2013), was based on one such ‘bot’, Britney Rivers. 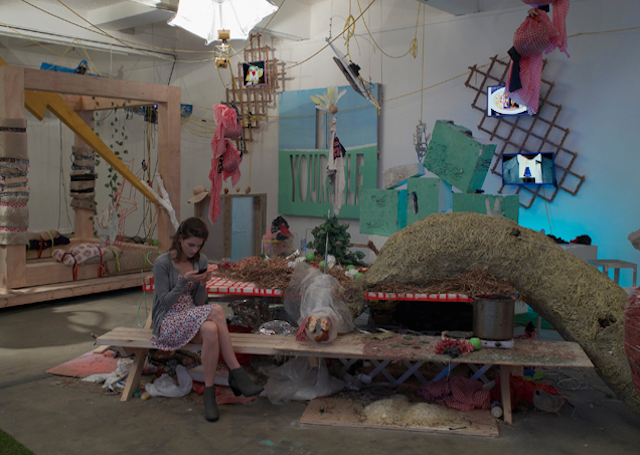 For Modern Family, ‘living room materiality’ is enacted via invitation to a family barbecue under an artificial Californian sunset. There’s a bubbling Jacuzzi in the corner with Michael Craig Martin-like wire sculptures of the Eiffel Tower, a martini glass, lipstick tube, the leaning tower of Pisa and a high heeled shoe. It’s like a collection of western motifs collapsed into one another. The barbeque sits on a strip of fake turf, and is filled with burnt out charcoal. A series of tongue-in-cheek slogans run throughout the exhibition (‘Be Yourself’, ‘We are one’), while mental illness is another recurring theme. One corny cut out jokes, “Hello, mental hospital? Yes, I’d like to reserve a family suite!”, while padding and cushions taped to the uprights of a central pergola act as a solitary confinement cell.

Central to Modern Family is a continually updated aggregating website linked to the APIs (application programming interfaces) of Twitter, Tumblr, Instagram and Google activated by search terms. Beamed onto plasma screens, the random imagery appropriated from these sites evokes the image-saturated nature of surfing the web. Fairies, pornography and profile pictures are randomly juxtaposed on the screens, creating a backdrop to an installation always in motion. 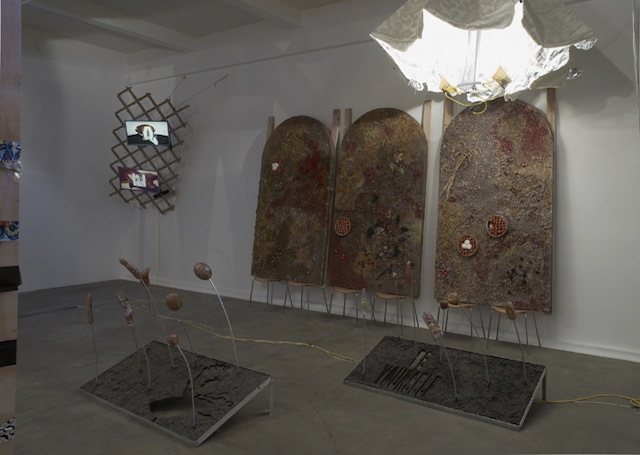 Periodically animated by actors exemplifying archetypal family roles, these characters are also embodied by sculptures and domestic items. There’s a huge pair of trousers hanging from the ceiling and a big stocky statue of a man with a mini-bar in his stomach. Tragicomic, it’s inspired by dads in cartoons. Next to the barbeque, there’s what looks like a child, Perspex legs full of colourful building blocks and sticking out of a breezeblock. Scattered throughout the installation, there is an array of amputated limbs. Arms, legs and hands are all cast in clear plastic, and filled with Cheerios, pretzels and Shredded Wheat. Traditionally a symbol of nutrition and health, the breakfast cereals and snacks instead look like disease.

At the far end of the room, a triptych with the scale of a 16th century altarpiece casually rests on a row of chairs. Abstract and coloured in shades of brown, green and red, it looks like an Anselm Kiefer. Pasted onto its surface are four cherry pies and a sheaf of wheat. At first look, it seems appealing, like the bounty of a harvest festival, but on closer inspection the canvas is covered in maggots and insects.

Scattered with the objects of domestic life, from potatoes to children’s dresses, picnic blankets to breakfast cereal, Modern Family acts as a social mirror to contemporary family life. Through presenting piles of children’s toys covered in mud, or diseased looking limbs, it casts a critical eye, not only on traditional notions of the nurturing and wholesome family home but the role of advertisers and public bodies in hijacking the data we’ve offered up for free. ** 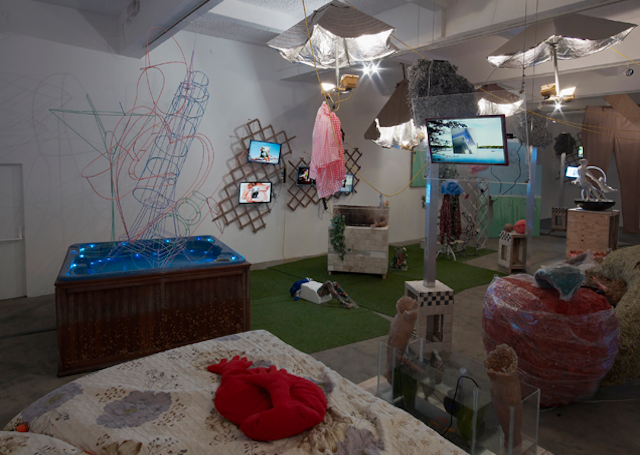 Ed Fornieles’s Modern Family solo exhibition is on at Chisenhale Gallery, running from September 19 to November 9, 2014.