The most pointed and, in my opinion, apt commentary on last weekend’s ACCELERATIONISM:
A symposium on tendencies in capitalism came in the form of a tiny, inconspicuous size-10-font critique written on the display tag for Hito Steyerl’s video work ‘In Free Fall’ (2010): “The author wishes to personally insult anyone attracted by accelerationism by calling it a bout of dead white Ferrari envy, dripping from head to toe with stale testosterone.”

Steyerl’s video was part of the group exhibition 14.12.13, which confronted the recent trend of speculative realist philosophy and object-oriented ontology (OOO) in contemporary art theory and practice.* 14.12.13 (the date of the one-day show) represents a chronological disorder and an opening toward the multidimensionality of time.

The exhibition’s description by one of the curators, Armen Avanessian, is rife with vitalist, hyper-masculine language. He makes calls to “seize” reality and perform creative “abductions”, to revel in the unpredictability of the present and the future via the radical contingency of the material world. In this way, he argues, art and philosophy “can speculate on a new time, a new reality…But no time this time for catastrophism. The speculative is instead the time of anastrophism.” This anti-reflexive, accelerationist perspective relies on the idea that the past is unforeseeable and the future is now. It’s time to embrace objectification and cold materiality, and to accelerate the “energetic viscera” of capitalism to its finality rather than choose the path of withdrawal. 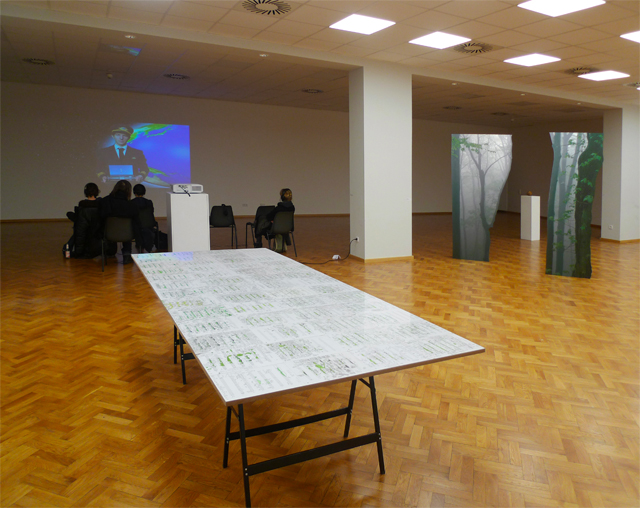 The day-long conference running alongside the exhibition offered a forum for invited speakers to debate the merits of accelerationism as a political philosophy. UK Marxist and academic Benjamin Noys (who coined the term ‘accelerationism’ as it is used in the contemporary field of political theory) challenged the concept on the grounds that proponents have failed to adequately develop, in relation to the existing and present conditions of capital, exactly what is being accelerated and by whom. He argues that no matter how much we focus on accelerating the inhumanity or anti-humanism of the object –pushing the system on its course for ‘audio-necromancy’ – the logic of capitalism will never allow human labour or social relations to become entirely superfluous.

Co-curated by Galerie Kraupa-Tuskany Zeidler and also featuring the work of Julieta Aranda, Diann Bauer, Daniel Keller and Andreas Töpfer, the 14.12.13 exhibition explored these themes in relation to accelerationist aesthetics, whether as critique or sympathetic response. Central to this is New York-based artist Ian Cheng’s disjointed, algorithmically generated “infinite duration” live simulations that  look like surrealist paintings, fragmentary elements exploding haphazardly across the screen. The program is ‘endlessly evolving’ or accelerating and images break up in front of our eyes: entropy reigns! Cheng’s work and its theoretical impetus are propelled by the intoxications of digital potentiality.

In Katja Novitskova’s more subdued cardboard cut-outs, we see corporate advertising aesthetics used to depict pristine natural settings. Her work is inspired by Deleuzian philosopher Manuel de Landa, whose theories of natural self-organization provide a basis for collapsing human and non-human relations. Novitskova brings out the trends of natural selection and competition that prevail in both evolutionary biology and commerce. Her work explores the possibility of new mutations and new forms of living in both nature and culture. Both Cheng and Novitskova present future-oriented projects that relish the prospects of the digital age, in a manner structurally similar to Modernist-Futurist programs but with a pseudo-Marxist twist.

14.12.13 and the ACCELERATIONISM: A symposium on tendencies in capitalism ran at Berlin’s Kraupa-Tuskany on December 14, 2013.

*For more in-depth analysis of speculative realism and its relation to aesthetics read this article by Svenja Bromberg.