While preparing this piece, I imagined myself (to paraphrase Paul Kneale‘s suggestion below) dabbling in a dead medium. If the essay is now nothing more than a mummified format, writing one would surely become the literary equivalent of hauntology; chasing an elusive apparition through a custom, which has long lost its relevance. But is this in fact the case?

The direct inspiration for this essay stems from two sources: the first being the radical requiem for long-format writing penned by Kneale, multimedia artist and poet, and the second –the practical journalistic necessity to come up with an annual ‘Best Albums of the Year’ list–the end of 2013 draws near, and traditional summations and rankings inevitably follow. Kneale, who admits to a fascination with Twitter in Rhizome (even though his interview replies are extraordinarily verbose), bids farewell to the essay with impressive audacity in his ‘UNTHESIS’, first published in How to Sleep Faster #4: “Wikipedia will confirm that this format, long venerated by the Western academic tradition, came to prominence by no particular necessity and is a kind of accidental regime. Good Riddance.” My initial response to this statement was to the contrary but further reflection followed.

I spent the majority of the year listening to nothing but new music, and even then I’m struggling to recommend more than a handful of long players, as opposed to singles, EPs and online releases. I’m also reading more than one book at a time these days, non-fiction rather than novels, and usually taking breaks for online browsing in the meantime. Perhaps then, there is something in the notion of culture being experienced in ever-decreasing doses? 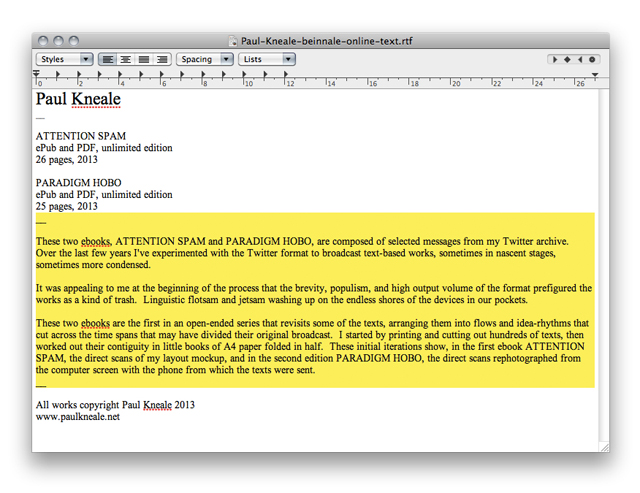 For a few years, the concept of attention scattered and fragmented by overwhelming digital dataflow has been gaining popularity. In 2008, Nicholas Carr published the much-cited article ‘Is Google making us stupid?’ in The Atlantic (paradoxically, complaints of this kind are often delivered in essay form). According to Carr, the non-linear, meandering, forking narratives of the Web have a destructive impact on the human brain and cognition: they encourage a ‘vertical’, chopped and screwed intake of information, thereby hindering deepened reflection, contemplation and, consequently, understanding. Even though neurological research is yet to confirm or deny Carr’s hypothesis (later developed in the book, The Shallows), his metaphor of informational white noise appears to have started living its own meme-life (in the original Dawkinsian sense –a contagious thought or product of culture). Richard Foreman coined the vivid image of ‘pancake people—spread wide and thin as we connect with that vast network of information accessed by the mere touch of a button’ in The Edge. As a remedy for this seemingly thoughtless data consumption, the “slow reading” movement emerged –with the idea of revelling in the book, preferably in printed form, at its crux.

So, pancaked populace or an inevitable cognitive shift? Most likely, both…or neither. The binary opposition of ‘skimming’ versus ‘reading’ appears dangerously reductive. Even if subjective empirical experiences, mine included, seem to confirm some of Carr’s observations, this doesn’t change the fact that the zeitgeist still supports the long form, especially the essay. A brief glance back at history reveals that the views of Kneale and others of a similar sentiment are hardly a revelation: the death of the medium was already being discussed as early as 1922 in ‘The Modern Essay’ by Virginia Woolf.

These anxieties are, at least to an extent, groundless. Traditional journalistic forms don’t appear to be subsumed, despite the decreasing sales of printed magazines and newspapers: the much-feared transition to the digital world proceeds in a smoother fashion, with inventions like the Kindle Single (a mini-e-book containing an essay or novella; the literary equivalent of a 7’’ record), elaborate multimedia publications pioneered by The New York Times, in which extensive writing coexists with photography, video and infographics and popular websites such as Longreads or Longform. The widespread use of Twitter by commentators, journalists and bloggers can lead to the impression that we live under the dominion of the 140-character aphorism, in which personal wit and a talent for wordplay reign over meaningful content. This tendency speaks more about a users’ narcissism (as anyone can try and channel their inner Oscar Wilde or Dorothy Parker) and contemporary fashion more than it does of a sea-change in journalism itself. In Retromania, Simon Reynolds paints the present day as an odd, modernised echo of the Edwardian era, in which snobbish interests in mundane and relatively trivial matters like décor, fashion and cuisine prevail. The vogue for Twitter one-liners seems to go hand-in-hand with such subjects. The aphorism, whether printed or digital, coincides with other forms of expression, as it has always done.

The essay seems to thrive online partly due to its personal nature: thanks to the popularity of the blog format, one can observe the rise of the amateur columnist; an average post meeting the guidelines of a miniature essay, with its subjective character and its theme of either musing on a topic or articulating a pre-formed worldview. In the age of Huffington Post-type media and the click-based digital economy, the borders between blogging and journalism become increasingly blurred and porous, and it’s opinion pieces – those which stir, polarize, and thus generate lucrative user engagement – that are in demand.

Even as early as 2004, a few years before the ‘your brain on Google’ debate, Philip Hensher announced in The Observer that the age of fiction was coming to an end, with readers tending towards the instant gratification of non-fiction instead. Non-fiction, even skim-read, Hensher argues, always provides the benefit of knowledge gained, while reading a novel requires the endeavour of immersion, but without guaranteed reward. This seems to fit with the idea of an Internet-driven ‘culture of facts’, which favours strict, pure data over ‘mind-flaneurism’, inefficiently deepened reflection.

If this is really so, how then do we explain the tendency towards vast narratives in mainstream readership? The popular audience chooses Stephen King’s Doctor Sleep (over 500 pages), George R.R. Martin’s Songs of Ice and Fire (five volumes so far), or Dan Brown’s Inferno (400-plus pages). The prevailing phenomenon of quality TV drama adds to the long narrative trend: watching an entire series of Mad Men or Breaking Bad in close succession is a common pastime, now that episodes are easily accessible online, and with the Sky+ box or Netflix the viewer doesn’t have to rely on TV scheduling anymore. Dramas couple the popular and the ambitious (as noted recently by Stuart Jeffries in The Guardian), but also combine long and short formats: elaborate stories, divided into seasons and then further into episodes, appear to feed the contemporary viewer’s attention span in the optimum manner. A brief look at the ever-expanding gaming industry will also confirm that concise formats (e.g. Angry Birds) coexist with epics such as Skyrim, without tilting to either side. Simple mobile phone or browser games fill periods of transience, be it whilst commuting, eating lunch or procrastinating online –yet this doesn’t stop the immersive, narrative-arced games from thriving. In fact, quite the contrary, the current bestseller, Grand Theft Auto V, offers 100-plus hours of gameplay and is said to have caused a worldwide ‘epidemic’ of employee sick days on its release.

So we live in a culture of long and short forms simultaneously, in almost every niche. Music, however, seems to provide a curious exception: here, the trend clearly slopes towards miniaturisation. Sales in CD format are already overtaken by digital downloads, and among those, listeners increasingly prefer to buy single songs rather than entire albums, hence the introduction of TEA (track equivalent albums), a sales measuring system in which 10 downloads are counted as one LP. In the world of widely-understood ‘independent’ music, the traditional album is gradually becoming replaced by online streaming, mixtapes, singles and, at best, EPs. Artists who astonish in these short forms are often struck by a strange malaise when it comes to recording full-length works– which, preceded by long waiting periods, turn out to be disappointing (as proven recently, e.g. by Laurel Halo, and to an extent by Factory Floor; the judgement day for Azealia Banks’ Broke with Expensive Taste has been postponed again till 2014).

The lack of good LPs doesn’t necessarily mean that there’s something wrong with contemporary music per se – but rather than its traditional medium of delivery (lest we forget, equally an ‘accidental regime’ predicated on technical invention and physical length limitation in the first place!) may be uncoupling from its content. Perhaps then, it’s time to stop treating singles and EPs as merely an announcement, or teaser, for an LP. And as for that incomplete ‘Best Albums of 2013’ list, perhaps I should try and prepare a compilation of best releases, in the widest possible meaning of the phrase, instead. **