“I don’t mean to sound like a hokey but it’s like he’s here in very clear ways”, says Alexis Penney, two months on from the sudden death of his friend and soul mate, Grant. Last I spoke to him it was less than a week since the news, Penney’s debut album, Window (on which Grant also plays), recently released, and his general outlook a significantly bleak one. The shell shock was apparent and the conversation equally as self-exposing when, by some weird twist of fate, the hour-long recording was corrupted and the file lost. I could have said it was Divine Providence –given the sensitive nature of the conversation –if not for my own scepticism regarding all things mystical, as well as the fact that Penney isn’t exactly one for self-censoring, generally.

If it isn’t his active twitter feed of sharing what feels like every waking moment of his life, loves and, in this case, personal tragedies, with thousands of followers, it’s his book, also called Window and published by Peradam Publishing Group, that is an open, sometimes confronting, account of the 26-year-old’s many lives, across cities, countercultures and, most importantly, relationships that have shaped the person we see today.

A non-linear collection of vignettes constructed into a logical “stream of heartache”, as Penney calls it, Window lives up to its promise of transparency by providing a bare-bones account of what it’s like growing up on the queer margins, across middle America, San Francisco and finally New York, where he’s now based. A drag queen, musician, writer and performer, Penney doesn’t only play with labels by mixing and matching gender signifiers but also the idea of performance –applied liberally to everything he does, from his tweets and writing, to his choice of friends and sex life –but he also questions the very idea of human experience as something limited to the individual. 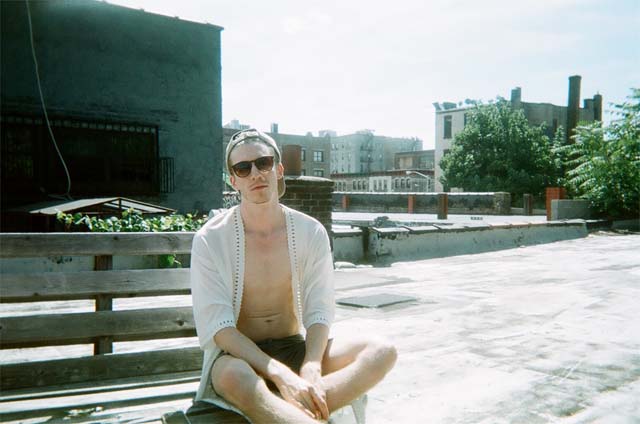 “I think it’s indicative of a lot of changes that are happening within our society and even within the human organism”, Penney says, making the connection between what he feels is the continued (meta)physical presence of Grant in his life and an emerging collective consciousness, spurred on by globalisation. “I think we are becoming even closer, approaching this emotional singularity and becoming a lot more in tune with the energy and stuff that we’ve kind of turned away from”. That’s how a conversation around Window and its stark observations across fluidity, intolerance and his all-too-numerous sexual encounters with “straight-identified guys”, that reveals Penney to be less the “anti-parent”, “anti-heterosexual”, “anti-human” as argued, drunkenly, with his parents in Window, and more deeply sensitive to injustice on a global scale.

Window is such an apt title for the book. You’re really opening up a world that is outside a heteronormative scope of understanding. It provides an insight into a whole world of masculine sexual interactions that I, for one, wasn’t aware of.

Alexis Penney: It’s interesting you say that because so many of the reactions, even from my close friends, are like, ‘you’re full of shit, you’re making something out of nothing’. My mother is perpetually coming back to this, ‘I’m sorry, if they’re hooking up with you, they’re not straight,’ but I think what it really brings to light is the fact that our sexuality is so mutable and so fluid. Whether we’re super-binary straight or gay, it’s actually all a very performative, social thing and it really has nothing to do with your biology or even your personality. People are very adaptable and they do crave connections and those connections will definitely transcend whatever physical boundaries you thought you had.

Do you mean ‘performative’ in terms of playing a role?

AP: Yeah, men are so performative. Men, in this society, are such peacocks. They have as many weird rules and social things as we typically associate with femininity, or with women, and they reinforce them even stronger but they have no way to talk about it. There’s no Cosmo for men. Dudes just don’t talk about this stuff at all. It’s really crazy.

We’re not really given an appropriate way to express affection for other men, even for women. Like, in India, dudes that are friends walk around holding hands. Men cannot do that in our culture. I think that drives us to not be able to express ourselves beyond very specific things, like sex. I’ve definitely had an experience of having sex with someone who identified as straight and later they would kind of feel weird about it. I’d be like, ‘I feel like, maybe, you didn’t even want to have sex, you just didn’t have any other way to say that you really like me’.

The flipside of that is sex is a really valid tool of expressing your affection. It’s just that it becomes pathologised by all these other cultural things that we attach to it. It’s definitely a weird situation. 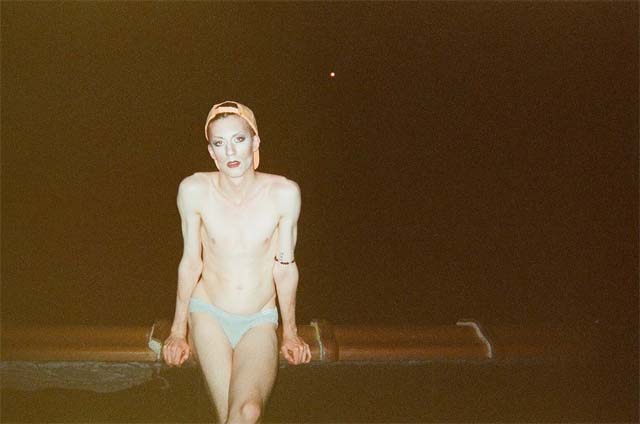 It’s interesting you say that, especially when you consider there are cultures outside a Western one that seem to, in one way or another, make allowance for deviation from that gender binary, however symbolic…

AP: It’s funny because we have this cultural hegemony that we think that we’re the most accepting ones because we’ve studied sexuality, that we know more. But we’ve had our heads so far up our asses scientifically, even with the distinction between homo- and heterosexual. Our culture is so binary and so dualistic in that way. But, actually, that’s a really recent distinction that basically is pseudo-science that was invented by post-Victorian propagandisers; people that would masquerade as scientists, that really just have a political or religious agenda. It just doesn’t make any sense to me.

People’s bodies, their physiology and the way that they express themselves, personality-wise, will really fall into step with the way that society says they should. I even look at myself and I think it’s such bullshit that I’m gay and I don’t have sex with women. I love women and I have such amazing connections with women. I really wish I could step out of that binary that I’m in and just really be totally all-encompassing with my affection but, for whatever reason, I’ve had to fit that role of a gay person.

There’s a very sound political reasoning in activism that maintains this idea of ‘nature’ over ‘nurture’ but you do wonder why the choice isn’t there.

AP: Yeah, along with the other idea, that once you go through puberty, the way that you end up in your late-teens, early-twenties is how you have to end up for the rest of your life. People change so much. Every seven years you have a completely new body, on a cellular level, and yet you have this idea that you find this one career you like, you find this one partner you like and you find this one place you want to live in for 70 years and then you die. That’s so unnatural and it sort of mirrors how sedentary we are, physically; where we just don’t move. There’s no physical activity like there should be and everyone just gets fat and sad.

It’s just one of our cultural failings and it’s a hurdle that we have to overcome if we want to make it as a species, to the next stage of our development into this global thing. We’re going to have to get over these ideals that we’ve imposed on each other because they’re not working. They worked to a point but then there are all these people that are bleeding out of the edges. 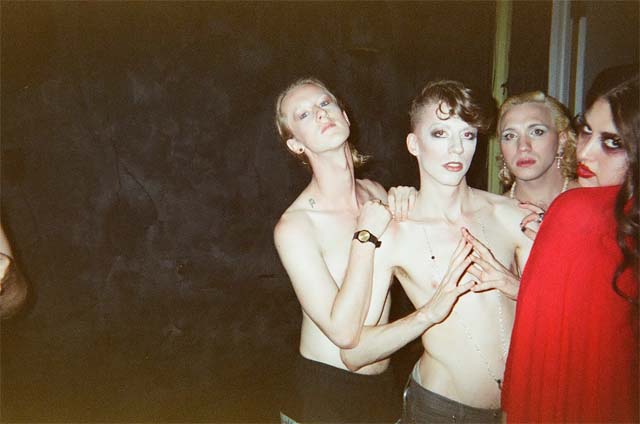 That’s what I like about Window. It gives voice, not only to people across the sexual and gender spectrum but a whole lot of people on the margins.

AP: I think it’s important as a culture, as a globalised world, that we really need to step away from the idea of ‘that person over there is very different and we can’t relate to them so much that we have to shoot that person or a drop a bomb on them’. That’s an idea that’s keeping most of the world in some pretty shitty living situations.

Speaking of how restrictive the Western perspective can be, it’s quite worrying when you think about it in terms of this ‘New Imperialism’ within a globalised culture.

AP: Yeah. It’s really just like European, American, Western everything is sort of fuelled and disseminated all over the place and we do kind of drive the innovation of all of these technologies that are spreading, allowing us to be so connected. But at the same time, yeah, we do have a dominance of sorts and it is an imperialism, culturally, but it’s such a two-way street. The fact remains that, as much as a coloniser, or a conquering nation, impresses itself on whoever it’s conquering, there’s so much exchange within that and that’s inescapable. It’s interesting, in an abstract way, that that effects everyone within all these cultures. From me to the slave in Africa that’s growing the chocolate that goes into my chocolate bar, we’re all weirdly affected by that and we’re all connected in ways that we don’t understand.

There are a lot of people getting the shit end of the stick and I’m not really sure what the next phase is. Yeah, I can show you, or whoever in this country, that I’m no different than they are but what we really need to do is approach the fact that, not only are you no different to the child slaves in the Congo that are mining the minerals that go into your cell phone but you’re actually connected to that person’s pain. There’s a really huge karmic payload of guilt and we all feel it.

It’s not just ‘white guilt’. It goes farther than that. So much of what we think of as this Western, pervasive anxiety and depression and all these problems, even if you can’t articulate it to yourself, it’s almost like you’re feeling the anguish.

Personally, I feel that everyone is super-psychically connected and you are feeling the anguish that another person doesn’t have the privilege to feel. That stuff gets shuffled around. No person is separate. Everybody’s pain diffuses throughout the world and we’re all hurting together right now. **

Alexis Penney’s book Window is out now through Peradampublishing, as well his album of the same name on Ecstasy Records.

All images courtesy of Alexis Penney from his Sore blog.