Is it a truism to state that technology controls our lives? In the wake of the surveillance debate ushered in by the Edward Snowden scandal, the question has rarely been more pertinent; all-pervasive it may well seem, but to what extent does it influence our ethical and aesthetic decisions? Certainly, the Internet has had had huge implications for our use of language, but is this really any more than a cosmetic change? These questions hang heavy over Everything Wants to Run, a group show organised by Brixton’s Block 336 collective. The exhibition seeks to explore “conditions of materiality in contemporary art practice”, and convoluted though the term might appear, it’s a valid premise that throws up some extremely imaginative contributions.

Descending into the basement of Block 336, one is immediately assaulted by a wall of undulating noise; feedback howls are punctuated by the sounds of fuses blowing and thunder rolling into a drum rattle. An ominous, site-specific sound installation Ambit is a collaboration between composers Erik Nyström and Peiman Khosravi. The portentous sweep of the piece is initially disturbing and invasive, but once familiarity, if that’s not too vague a term in Ambit‘s ceaselessly ambitious context, is established, it becomes almost meditative, informing the rest of the work in the show and pulsing around the gallery like a subliminal instruction to look more closely.

The rest of the exhibition is a rewardingly multifarious proposition. Daniel Silver, fresh from his concurrent Artangel commission Dig, offers ‘The Artist his Father and his Son’, a pair of enormous cast aluminium sculptures positioned in the centre of the main exhibition space. Reaching almost to the ceiling, the structures are contorted, mottled and perplexingly voluptuous, a simultaneous dialogue with each other and the austere concrete columns of the uncompromisingly Brutalist gallery. The monumentalism of Silver’s work is joyously at odds with Kate Owens‘ ‘The Old You’, hung at a right angle to his totems; transferring the azure dye of her jeans onto squares of paper, Owens has created a series of auto-paintings that call into question the very notion of chance. There is a certain randomness to the framed and mounted works as we see them, but how far is their appearance pre-determined by the pre-emptive strictures imposed by the artist? It’s an age-old question given a fascinating new articulation by these beautiful and quietly powerful works in which authorship collides head-on with anarchy. 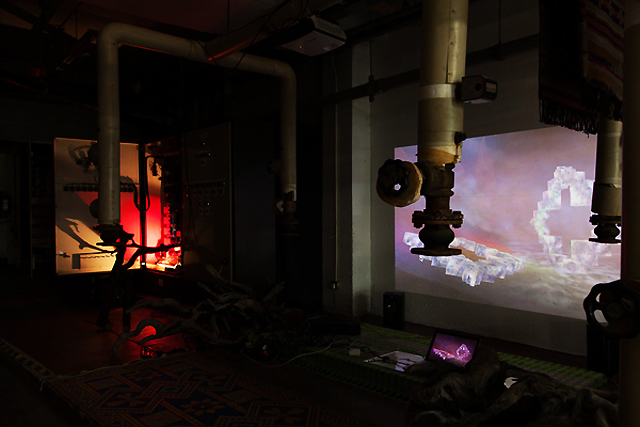 Two exhibits, Nathaniel Stern‘s Giverny Series and Charlotte Webb‘s ‘Flickr Nude or Noodle Descending a Staircase’, showcase the impossibly complicated limitations of technology with particular fluency and imagination. The former is a series of laminated printouts, the physical result of the artist strapping a scanner, a laptop and a battery pack to his person and attempting to make the machinery process the imagery of the environment around him. The prints -aqueous, indifferent bulges of luminous colour -articulate the fundamental inability of computer technology to independently read its surroundings in a way that has any rapport with physical reality. The implied frustration is palpable.

Webb’s installation is an interactive programme projected onto the wall of the entrance hall. Visitors are invited to type-search terms into an engine which then processes a live Flickr feed of every image related to them. The build-up of jpegs is bewildering; a search for “sanctity” gives an onslaught of monochrome photos of pensioners on benches, while “Conrad Black” is a trigger for pixelated puppies in the snow, pornographic ephemera and, eventually, a snap or two of the disgraced tycoon himself. As a dispassionate comment on the alienating banality of internet traffic when taken out of context, it’s revelatory; it is at once a celebration and a warning, a relatively simple but staggeringly comprehensive work. There is something curiously hypnotic about it as the images stack up listlessly in time to Nyström and Khosravi’s meta-musical score, but even then it’s hard not to shiver at the inhumanity of such a deluge of information and content.