In artist Rachel Reupke’s latest exhibition stills from fashion editorials come to life as moving images, romantic ideals sown by advertising execs are cut out and moments of awkwardness are played out in slow motion as various couples unsuccessfully loop over rounds of pints. Wine & Spirits, an exhibition at Cell Project Space, London is nothing if not a little dark, but that’s not to say you won’t find a little humour in the project too. Behind the close ups of cracked makeup and pints embarrassingly tipped over, there is a deliberate subversion of the language of cinematography: in the form of shots held far too long, that create laughable moments but also reveal the mechanisms that editors master to wipe out unattractive seconds of silence and create a seductive commercial through the use of software like Final Cut Pro.

A London-based artist, who began working with what she calls “indie-pop budget videos” before having screenings shown at Centre Georges Pompidou, Tate Modern and the International Film Festival Rotterdam, Reupke has built her reputation on managing to cover a mix of issues from money to class, happiness to relaxation, by focusing her lens on the production of images for commercial use. In ‘10 Seconds or Greater’ (year) this resulted in the production of totally new stock footage, based on scenes with tag-lines that were sure to make a healthy profit such as: a young, well-dressed couple chopping up and cooking fresh vegetables with smiles on their faces. The aim is always to try to come close to examining how popular marketing defines social taste. As Reupke explains that so many of us have grown up so saturated in this media that we very often forget to question our daily interaction with the box-set or laptop screen at all and, even more importantly, the way in which the narrative of the content is placed before us.

In Wine & Spirits, these trendy couples playing out social conventions are replaced by an altogether more sober bunch –in spite of the abundance of alcohol being visibly consumed. In each scene, a woman and a man sit opposite each other in obvious disdain at their bleak surroundings, to represent a corner of a bar or pub. This representation, in the form of a 20-minute HD film, shows what it might be like to really get to know someone, a counter to dating shows on TV, which delete so many of the pauses in conversation and nerves that modern dating conventions entail. In the next room, 24 images of unbranded pint glasses titled “Nonic” are also to be found of rounds.  Drawn on PhotoShop they ultimately allude to the numbing effects of alcohol on our senses and in turn the deadness, or perhaps apathy, towards confronting popular media.

Firstly, I wanted to ask if you were to pitch Wine & Spirits as a programme to an actual TV executive what would you say its goal was?

Rachel Reupke: Well, I think in the first place the idea of it being a show is very different from the actual film. It doesn’t have the structure of a TV show. It’s more like a drama of some sort, so it would be a TV drama I suppose, a very boring TV drama about people meeting up for a drink.

One of the original BBC goals was to entertain, inform and educate. Would you say Wine & Spirits had any of those goals?

RR: To be frank, I think it fails on all those levels. If anything, it lends itself more to the time when they were commissioning fantastic experimental TV. It certainly doesn’t educate, and it barely entertains. I often use boredom as a humorous device though, for example, when a shot is held for way-way too long. There’s nothing interesting in that and there’s nothing entertaining but it’s that tipping point, when the audience becomes aware that something’s gone wrong with the film. For example, I used to love watching darts live late at night. There were always lots of times in the darts competition when nothing happened and you saw that the camera had suddenly settled on a rucksack under a chair. You knew there was no producer there watching what was being broadcast – and I think my film has a little of that quality to it.

Why did you choose to shoot your own footage instead of using stock footage from dating shows?

RR: The point is that I have control over the content of the shot; from who’s in it to what’s in it and even the composition. I just can’t get from used footage what I produce because there’s something about the way in which our actors are stiff in my work, even quite posed, that you don’t get in real footage. To be honest though, I wouldn’t say it’s really talking about the medium of TV that much. I just think we have all grown up so saturated in TV so I think our reading of film or moving image is so sophisticated, so that element inevitably seeps in but I’m not trying to critique TV but I wouldn’t make that claim. In terms of the quality of art direction and quality of image, yes, but I wouldn’t say its a critique or anything.

Who are the characters in this film?

RR: There are two. There is one man and one woman. It’s the same actors throughout but they’re not necessarily playing the same characters in each scene.

In one of the clips they look like they’re on a quite a high class night out, except for the fact that they’re drinking pints of Guinness…

RR: Each scene is based on a still image and that scene is based on a really old still for Guinness. I haven’t mentioned that because if you tag your references then people get waylaid by Guinness. You know, it’s not really about Guinness at all but I really liked the composition of this advert. It’s quite interesting because it’s a Guinness advert directed at women. I think it’s in the 50s when they were trying to get women to drink Guinness. 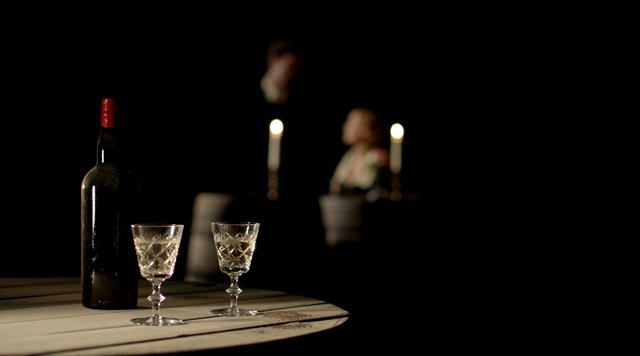 That’s why the man is out of shot?

RR: Exactly, the focus is on the woman.

And so what other visual research did you do for the project? Was it mainly composed of advertising stills?

RR: Yes, print advertising rather than TV, just because I like to work from a still image and also editorial photography, commercial realms, a bit like the Sunday supplements; that lush photography of an editorial nature or advertising. And then one of them is actually my own composition.

RR: It’s a mixed vibe, a mixed message, I’m not pinning it down too much but it’s not even aspirational because some of the locations are quite abject. I think it’s fairly classless. Also, with the clothes, we were going for a real non-specific style, without era or type of person, so it is as neutral as is possible.

What about the lagers and the pint glasses… I read that you haven’t just included them in the film but that you’ve done drawings of them on PhotoShop?

RR: Yes there is a series of prints in the second room, 24 prints called ‘Nonic’, which are rounds of drinks, two or three pints or half-pints, and there is a wine glass in there somewhere. They’re not branded and they’re also a little old fashioned in that they don’t have individual shapes like the Stella [Artois] or Kronenberg glass. I’ve avoided all of those and gone for really classic pub glasses, so there’s no brands indicated. I suppose Guinness is the only thing that is unavoidably associated with itself because of the colour.

Why did you choose to draw them in PhotoShop?

RR: There’s something quite obsessive about these rounds of drinks and to take photographs of rounds of drinks means you’re kind of there or you collected the glasses together to make the shoot and there is some sort of sense of reality, an event, in the artwork. Whereas rendering them in PhotoShop is a bit day-dreamy but also obsessive, while being a little bit of a joke because there are 24 of them. And you ask, ‘why is this person drawing or rendering endless rounds of drink?’ There’s something about the boredom of drinking or the boredom of always going out to the pub, one round after the other. It’s endless, from the age where you get into the pub to death… It’s possibly a bit dark this work. It’s not celebratory.

What about the idea of romantic love and dating website algorithms, where do they inform this project?

RR: The whole internet dating thing is not really part of the work. I mean, I’m very happy for it to be written about in those terms but it’s not actually part of what I was thinking about with the relationships. In the film, they’re certainly not first dates. They’re people that are far more familiar with each other. It could be any point in the relationship. It’s very hard to define. They could be work colleagues going out for a drink, going from a friendship to trying something else, it could be the end of the relationship or it could even be an ex-boyfriend and girlfriend meeting up, any point, actually. But I guess what it isn’t, is a scenario where either of them are trying to impress the other. It’s gone beyond that point. You know they’ve definitely given up. **