Shapeshifting, Young Galaxy‘s third LP just came out last week (under Paper Bag in the U.S.), and it represents quite a big twist compared to their previous works, less cinematic guitars and more pop synths… they had to join the trend to grab our attention?

Kind of, this couple + 1 of Canadians worked with Dan Lissvik, half of the Swedish duo Studio who polished these tracks to give them that pOp Swedish touch omnipresent these days. 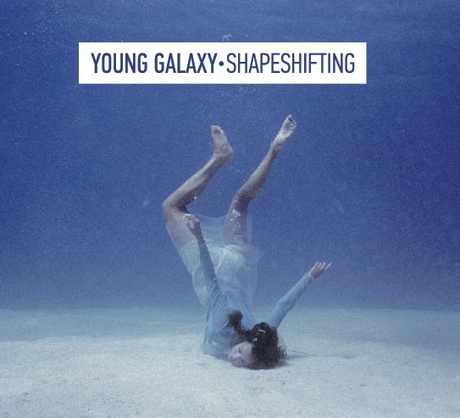 Young Galaxy first contacted Lissvik during the making of 2009’s Invisible Republic, asking him to mix one of its songs. They were fans of his work with Studio, his remixes for acts like Fever Ray and Kylie Minogue. But although Lissvik’s mix wasn’t the right feel for the epic, rocking Invisible Republic – he “deconstructed the band”, recalls Ramsay, – his vision of Young Galaxy stayed with them. When the dust from the record had settled – barely – the group already knew what they wanted for LP3.

Looks like after meeting Lissvik the Montreal Trio decided to give their sounds a much more relevant & indie approach, good enough to stop being Arcade Fire’s or Death Cab for Cutie’s support band.

The video of their first single was directed and created by Sinbad Richardson and you can download “We have everything” on PaperBag Record’s page, unfortunately for us poor Europeans we’ll have to wait until April 11th when it comes out on Smalltown Supersound.

Shapeshifting We Have Everything young galaxy
Recent articles