A House in California is an experimental point & click adventure game Jake Elliott has been working on since February of 2010.

“It’s gone through a lot of changes in direction and content, but at its core the game has always been about a community of people who explore surreal and peaceful environments and build a house together. The game is inspired aesthetically by Mystery House, developed in 1980 by Roberta & Ken Williams. But whereas Mystery House is a mystery story about greed and murder, A House in California is more like an Imagist poem about family and memory. A House in California is being featured in the Learn to Play exhibition at Euphrat Museum of Art, and also at the Meaningful Play conference at Michigan State University in October.”

We were instantly spellbound by the simplistic but amazingly effective ways of using the 80s graphics with those light & color effects, the music and the powerful imagination of the plot (take a look & play their previous game “Humming bird“) … it looks very promising, and that’s why we decided to included it as part of our “we support” portfolio.

To most of you (young generation gamers) this won’t be very appealing (if any) but to most of the old (and not that old) Apple & PC gamers who were familiarized with big Floppy disks then this is a nice way of using our brains again instead of pointing a shotgun with any “move” wireless controller (which we also like huh!).

The game will be released on November 1st … for free & open source!! As Jake puts it…

“Now that I’ve finally finished developing the game, I plan to release it for free & open up the source code. I want to release it for free because, in my experience, free digital game distribution is a great way to reach a large number of people. I also don’t feel comfortable requiring people to pay in order to play this very personal & experimental game”. 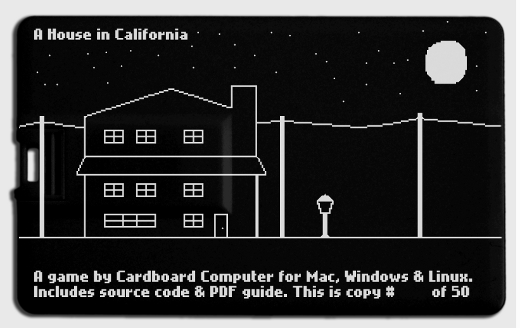 The game still has 19 more days to “get funded” via Kickstarter, and even though it’s already clearly reached its $600 goal you may well want to put one tiny dollar for getting the digital copy before anyone else (Oct 15th).