If A.A. Milne had a glimpse into the future he would be….. proud we guess, because adapting such a freaky thing as Winnie the Pooh with Star Wars motives wouldn’t sound sane at all if we first told you. But when looking at the images James Hance has drawn for his first book “Wookiee The Chew – The House at Chew Corner” we can only think… oh God, bless him.

“‘Wookiee The Chew’, in the style of the original Pooh books tells the adorkable tale of the little biped that belonged to Chrisolo Robin (and Chrisolo Robin belonged to him). 24 pages of affectionately crafted adventure, brand new illustrations and sneaky Star Wars references”.

Suitable for Jedi young and old for $5 … it can even be shipped outside the US (but you’ll have to get in touch with him). Alternativel you can go and pick one up from Cafe 331, 331 West Forsyth Street, Downtown Jacksonville or Universe of Superheroes, 2724 Park St, Jacksonville (Florida). 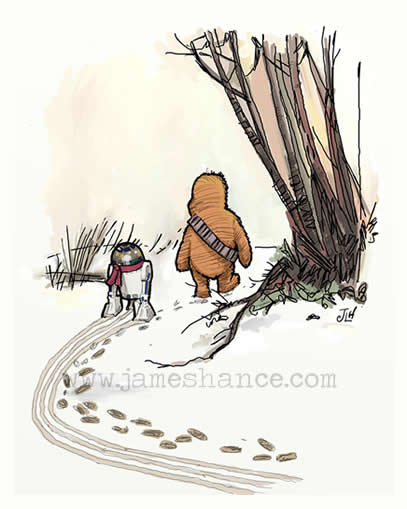 James is pretty well known for his celebrity paintings, contemporary culture (the Muppets, Disney…) & Star Wars reinterpretations. Always with bold and bright colors twisted & surreal messages…. but not this time!