There’s a breeze of kaleidoscopic tunes that have been invading our homes, clubs & favorite websites lately. A torrent of ultra-vitaminated psychedelic sounds that will help you relax in the most stressful situations or under the most extreme climatological conditions.

Funnily enough while posting the other day about the “Coalition of the willing” & diving into the “60’s counterculture movement”… all those dreams, idealisms & colorful experiences the film talks about seem to get along with these new beach music trends coming from Barcelona, Ontario, Berlin, Baltimore, L.A, London ……….. they perfectly match with that Internet democracy expressionism we’re finding lately via crowdfunding tools, spontaneous on-line movements (like against British Petroleum), social & common freedom… (and I’m not talking about Myspace). 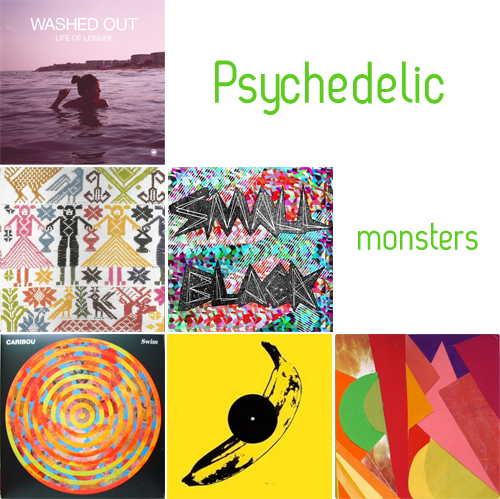 Probably is just part of the music industry machinery who was in great need of substituting the 00s electro & hip-hop waves, so most “indie” labels (warp, anticon, domino, xl, fatcat… ) have found their own melody-drug magician.

We’re talking about famous bands (or collective formations as u prefer) such as Animal Collective, múm or to the greatest mentally-gifted individuals & projects like El Guincho, Baths or Washed Out… so much synth-pop, so much psychedelic rock, so much new-wave, leftfield, experimental and twisted IDM … so many underthepillow drugs to get inspired with.

The explosion of these mutant-coloured disco addicts high on filters & synthetic sounds begun less than 10 years ago, all children of the late 70s & 80s even early 90s inheriting the uninhibited & non-prejudiced sounds of the 60s. Pure sophisticated psychotropia. Their sounds & many times visual purification is something spontaneous for them who’ve been brought up with afro-Caribbean beats listening to Can, Syd Barrett & Kyler while sometimes experimenting the effects of a good smiley; sounds that go beyond the experimental electro from the 90s. This sweetened mix of obvious elements from the Beach Boys to the 80’s 8-bit electronics & an infinite loop of samplers don’t necessarily need to tell a story, they’re mostly “connections to places in mind”.

And as in most cases these sons of the acid generation talk about living in psychic cities, sleep paralysist , drugs, pleasant experiences without having really lived any of that, kids of the boombox, pupils of the summer beach festivals.

And within this constant synthetic hangover yet a new breed of artists has emerged in the last couple of years. The local & latin versions of these new music geek generation who love to play with synthesisers more than having sex. Who love to mix their narcotic sounds, reverbs & delays with sounds of their countries of origin.

In this sac we’ll find the over-hyped and ultra-exploited El Guincho, who just released “Piratas de Sudamerica” EP (the first of a series where he’ll be re-interpreting traditional music from South America); Los Amparito, the latest Mexican revolution, Los Masieras (we still don’t know what to expect from them) or the California & NY wonderkids like Baths or Small Black… a never ending list.

We could even also consider the balearic gems & dreamy pop of Swedish Korallreven or the also Swedish duo The Tough Alliance (and the soloproject CEO).

Unfortunately as we were saying before the spontaneity & growth of these magical mushrooms has already started to be controlled by avid studios. Ultra-clean productions with perfectly calculated outer-space sounds & crystal clear voices…no musical trend can escape from them.

here’s a list of some the latest passion fruits we’ve carefully chosen for you to … enjoy!

and our latest favourite:

One For Dimlite by Illum Sphere