The Eye to eye group exhibition at New York’s Arsenal Contemporary opens January 25 and is running to February 25.

Sanctuary for Families is a New York-based charity and organisation working for those affected by gender and domestic violence, sex trafficking and more, providing safety and stability to those in need through clinical serves, shelter and programmes.

The Transmissions from the Etherspace project at Madrid’s La Casa Encendida begins May 4 and is running to the 28.

Referring to the event as ‘a data cloud that changes shape’, the performative experience brings together multiple layers and interconnections to epplore both tangible and intangible frictions, “generating a queer space-time network where streams of information converge and alchemical transformations take place.”

Rotterdam’s Peach is presenting the opening of their a temporary space at Amsterdam’s W139 on the evening of November 18.

To celebrate the month-long relocation, the night will mark the beginning of a series of events, exhibitions and performances. Playing host at the temporary and intimate home space, the artist-run project will bring together the ethos and community it has been gathering in an “explosion of the domestic”.

The apartment will feature five exhibitions over the course of the month: The Apartment as well as Home Movies opening November 19 and running to December 18, featuring work by Ghislain Amar and Chantal Akerman among others. The Fates running November 19 to 22 will feature a line-up with Nina Beier among them. Brachland — organised by DINGUM and running November 26 to December 15 — includes Mathis Altmann, Olga Balema, Amy Yao, more. And finally, The Life Intense, opening December 16 and will include New Bretagne, OKAY CONFIANCE, Jenifer Nails, Anni Puolaka, Viktor Timofeev and more.

“Frieze is a whole but it’s also nothing” is the first numb note I write in my phone as I begin. It feels secretive and resistant to be writing instead of taking photographs at Frieze London, but I wonder about representation when I look at art. Can you encounter something that has swallowed quietly the conditions of its making and is powerful and believable because of that? Maybe representation can mean too many things for this point, but the word ‘represents’ is thrown around a lot at the art fair this year. Who is representing whom, which artist is being represented by which gallery? And yet, despite this, there’s a notable lack of panels signalling artist’s names. I have to ask so many times and it’s embarrassing. I wonder not only about reflection in terms of the relationship between the inside of Frieze and the outside of Frieze, but also about what happens to artists and their work when they’re in: What exactly am I looking at here?

Any critique of Frieze inside the institution of Frieze itself keeps feeling self-circulating and boring, and the words like “welcome to purgatory”, or something to that effect, spray painted along the purposefully roughened walls of the fair’s entrance are weird and not useful somehow.

Dipping in and out of white-walled consciousness two small twin girls appear, wearing matching white dresses and tied together by really long hair, a work re-done from 1984 by Brazilian artist, Tunga. You could buy the hair if you wanted to for £20,000 but you have to provide the twins.

Another hair piece is beautiful. Nina Beier, with London’s Laura Bartlett Gallery, shows a series of four framed pictures with pink backgrounds with wigs squashed flat between the glass and the pink. Immediately the effect is that someone close is turned away from you looking elsewhere –like you are gazing at the back of their head. And it is squashed –a human deflated. The actual (it is a real wig and wigs do that when you squash them like that) but also incidental work of this work is amazing in the face of many others at the fair that deal with the representation of humans deflated, or empty. ‘Is there any point in collecting a Zeitgeist at Frieze?’ I think, as I witness the third airplane of the day and many skeletal sculptures of houses and offices; but also as I remember about Beier’s work being a possible antidote or actual reflection of the experience of looking at art here.

Jay Chung and Q Takeki Maeda’s collaborative work in Cabinet’s booth is sepia, calm and deathly. There’s a stone, and some photographs on the walls that show moments like a door ajar that incidentally (or not) has the same arc as a shape on the floor, as though a door might open into it. It is dead but good, and the whole booth provides respite and dejected escapism from the constant image-taking and aimless wondering towards Mark Leckey’s huge inflated cat-sculpture, ‘Felix’, that towers above the walls of its own Galerie Buchholz booth.

In Vilma Gold’s booth, New York-based Trisha Baga’s whiteboard screen is installed with things and writing attached to its surface. It’s opposite some moving projection spotlights, looking at and for these things. Using imagery itself as a light seems full of intuition and pleasure and is akin to tired eyes searching with a heavy sense of something already seen. And then comes Amalia Ulman’s installation, ‘The Annals of Private History’ created with London’s Arcadia Missa, which is as secretive and resistant as my writing to myself. Ulman created her own interior inside Frieze for the Live programme, turning the booth into an ‘L’ shape, lined with silver curtains and a red carpet. A video plays in front of black and white juggling balls that evokes 90s computer game Minesweeper. Ulman’s narrative video-presentation focusses on the inside of a diary, and the sadness of writing. The sound of a mine (unseen) goes off when someone (unseen) gets too close to something hidden –it’s the narrative, maybe, or the physical diary itself that Ulman is talking about and around. The artist’s voice apologises after the explosion. Without a smartphone (no recording devices are allowed in this booth) and the ability to casually record the work, the notion of writing being sad and the over-recording of experience being sorrowful makes so much sense, especially at Frieze, where art feels so treated, institutionalized and consumed.

On the first day at lunchtime there’s a talk called ‘Energy as Clickbait’ with iconic 90s writer Douglas Coupland and artist Emily Segal of trend-forecasting group K-Hole, who recently published Report On Doubt. They speak about memes and words that define trends becoming trendy, which feels self-circulating and too obvious to want to write about. Coupland, who defined ‘Generation X’ in his novel of the same name, refers to a cartoon that depicts the outlines of several white figures lost in a black background and awkwardly suggests how we are “all just white empty data now”. His words about “the individual” feel out of place and time and I want to leave and look at the art again. Let the art do the describing, if it can. Despite the knowing gesture in a poster at the discussion that says, “knowing everything can be boring”, the desire to, and act of defining the present in words is still dry, heavy and frustrating in that dark room.

The good booths in the fair hold you in their gaze. Dubai-based Grey Noise presents work by three artists, Caline Aoun, Charbel-joseph H. Boutros and Stéphanie Saadé from Lebanon who, I overhear, “are all friends”. A small poster of the sea is placed between the floor and the wall and the bottom of the paper has been dipped in water, making it ripple. All works are strong and non-decorative. “They are agreeing”, continues the eavesdropped voice. Laure Prouvost’s tapestry, ‘We Will Go Far’ (2015) at MOT International is a large and surreal scene that you have to look at hard to discover the small moments. A hand comes out of the sky via a row of breasts. A pair of cut out lips –a little like the ones in Ulman’s video –are smoking a cigarette with a snail attached to the end. Thin white banners with words on (“Do you want to get in my car?”/ “and drink milk from their warm tits”) drape intermittently across the imagery like Snapchat text boxes that act as signs or clues, but also as barriers. There are many roads and vessels but they don’t go anywhere. Especially not in a tapestry, which, as a process, is woven in.

Berlin based gallery, Société’s booth is puzzling. It’s silent and numb. All three works by Petra Cortright (a pink, yellow and blue digital layered painting on aluminum), New York-based Josh Kolbo (several small layered ambiguous digital images surrounded by a large proportion of frame) and Timur Si-Qin (a large print of on aluminium of the word ‘peace’ repeated over and over again forming a diagonal pattern) were out-sourced for their production. Si-Qin, who was interviewed by aqnb in 2013, also shows a glowing glass sculpture that has been scratched from the inside, holding an orange alien creature. It’s damaged but still manages to look like a commercial display unit. The word ‘peace’ is printed and embellished all over the inside. The viewer is on the outside, seeing the signs made to be seen from without.

The most magical work that lingers is a small print by Marie Angeletti at Carlos/Ishikawa called ‘Bambi’. The words, “believes any more” are above “are seeing anyway”. Both mini-phrases look like they are part of a bigger two-tiered sign above a pair of images of cartoon deer, but have been cut out and pitched together by the act of taking and framing the image. It feels like making by suggestion. Making from the outside. Maybe the spirit of Frieze, if there is one, is that some artists, and gallerists make and choose to show things that act like a barrier to the fair, somehow, in some small way. Maybe this is what I’m looking at? ** 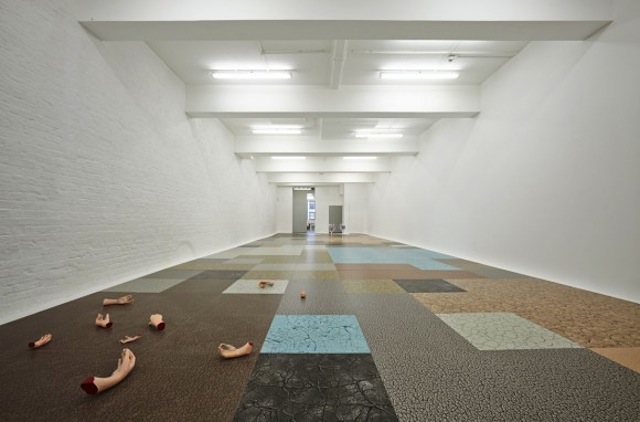 The exhibition features a collection of Beier’s new sculptural works, including a major spatial commission created site-specifically for DRAF, coming out a six-year collaboration between the artist and the gallery. According to its director, Vincent Honoré, Beier’s sculptures are “trapped in an ambiguous position between an object and the representation of that object” as she creates works that muddy the space between the two.

Her ambitious new work, Tileables (2014), which functions as a base for the exhibition, exemplifies this: mosaic tiles adorned with patterns created with 3-D modeling software and textured to imitate natural materials like marble and mud are arranged across the gallery floors, a from-the-ground-up shift of imitation and reality. 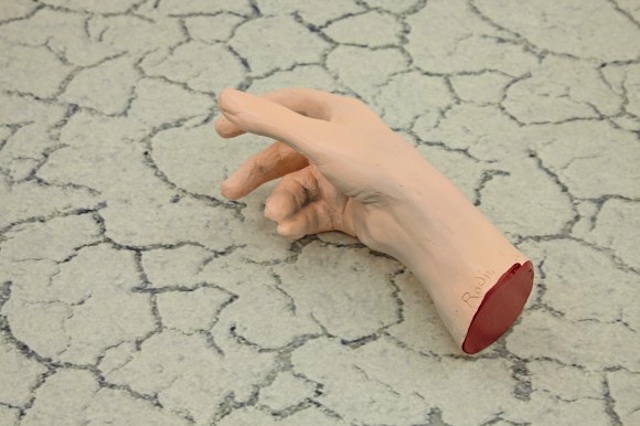