“Profile is an objectivization of a human-subject”, reads the first line of a text that drops down next to the event image —or profile —on Facebook. It continues: “Profile is ageless and has been programmed to be potentially immortal”, and “Profile is the reincarnation of the user, one that has renounced all his rights, abandoned his image, his voice, his hair to the realm of infinite malleability and interconnectedness.”

The exhibition text, which is written by Pierre-Alexandre Mateos and Charles Teyssou, curators of Paris collective sstmrt‘s recent Apartment show, positions Vierkant’s work as going in the opposite direction of contemporaries who inject subjectivity into virtual persona. Instead, they write in the long description that could almost be an obituary, Vierkant, who often works with notions of intangible property, abstracts a subjectivity, dissolving it into an “anti-predictive thing, liberated from the grid of reality to another matrix experience”… Is Profile dreaming of electric sheep?”

“Material Art Fair es la unica feria de arte contemporaneo en Mexico que se dedica a las practicas emergentes”, reads the homepage of the Material Art Fair website. The third edition, running from February 4 to 7, gathers more than 60 international galleries, project and artist-run spaces together in Mexico City. Settled on the sixth floor of the Expo Reforma –a 60s building caught between its own decay and attempts at some modernization near the historic city center and financial district –the event manifests in a maze where ‘emergent’ art spaces and practices mix and mingle in a kind of general mess. The hip set indeed exchange their natural habitat of alleys and signs for a spatial organization where booths follow one another in a row. The advantage: every way enables a round trip between the air-conditioned restaurant, the bookstore, the reception, the toilets, and almost nothing escapes the viewer.

At Mexico City-based Lodos‘ booth two large tapestries, vintage and traditional looking, are suspended on both sides in its center, creating a partitioned space.  Forced to sneak behind these compositions by French Mexico City-based artist Yann Gerstberger, these images or landscapes made of tinted floorcloth precede another mixed vision of the world in New Galerie’s installation. At one’s feet, silicone sculptures that look like different colored ox tongues by New York-based Olivia Erlanger prefigure the life-sucking cannibal scenario of movies and images by fellow NYC artist Darja Bajagić. Perched between thriller, pornography and death metal culture, one of her printed CDs hung on a wall reads, “Kill this fucking world”. It appears beside a series of C-print on hand-carved foam board –a blurry image of a goat, a sign that reads “Does that mean they are friendly” –by Vienna-based artists Anna-Sophie Berger’s completing the surgical picture.

Further on, Springsteen, a project established in 2013 by Baltimore duo Amelia Szpiech and Hunter Bradley, presents a series of paintings and found-objects by Erika Ceruzzi, along with a selection of robotic sculptures by Colin Foster including one described in a review on Artspace as “a ‘modified’ bug zapper that now works as a sculptural object while still killing bugs”. At Exo Exo, Brooklyn-based duo Bending Binding and their ‘Kooling Systems’ air conditioning condenser and aerosol paint explore the future stakes of past technologies in an ultra-productive and fast, yet failing and polluted globalized world.

One of the most interesting stories of this third edition of Material Art Fair is San Diego mobile project SPF15. Hidden beside the VIP restaurant, it occupies a space between projection, performance, discussion platform and what looks like a fire escape. “I’m sitting on the beach; it’s not particularly warm”, writes Morgan Mandalay, director and founder of the project in his announcement letter, “Despite the tales, it’s not exactly beach weather year round in San Diego.”  The exhibition series was first initiated under the Sunday Project before changing its name to SPF15 Exhibitions –not just a UVA protection guideline but short for ‘Sunday Project for 15 Exhibitions’: “Again I dive in head first with curiosity and knowing it will be a project of experimentation; a lab”.

More specifically, SPF15 is physically a three-by-three meter pop-up canopy on the beach. While it operates as a gallery, it is also conceived as a kind of social sculpture in which each exhibition is also a collaboration with a changing tent. For the fair, the canopy is an overall installation with works by Michael Assiff, Chelsea Culp, Tim Mann, Josh Reames and Kim Schreiber. Always creating a fiction or a scenario connected with this context and being able to settle everywhere, the display this time pays tribute to the body. Culp’s large sculpture ‘Party Panties’ (2015) is a drunk, disenchanted and failed one. “The beach as a space ignites the mutual feelings of titillation and shame for that titillation”, writes Morgan in an email addressing the choice of tent-as-installation-area. “The beach to me has always operated as a space to explore dualities: Land and sea, leisure and labor, the sexuality of the body and its banality.” Everything is about borders –physical, political, poetical.


“- How it works? – Clay”, says the text by Schreiber presented on a tablet at the SPF15 tent entrance. Inside is a ceremony, a kind of initiation rite, exposed but intimate; mobile, fictive, hidden. It’s a transitive space, a place of passage, learning, much like Korakrit Arunanondchai‘s ‘Painting with History in a Room Filled With People With Funny Names 3’ (2015) film, this time showing as Lodos’ gallery space in Mexico City’s San Rafael and presenting a spiritual, social and almost technological portrait of the artist.

It’s a portrait that Yves Scherer extends well beyond himself, interring it into a beautiful, abandoned building in Mexico’s Juárez district with his Snow White and the Huntsman exhibition. Organized by joségarcia, mx and Attilia Fattori Franchini, it takes gossip and fan fiction as a starting point, reconstituting these stories into a physical context of immersive environments. Photos of actress Kristen Stewart and references to her public love scandal with Snow White and the Huntsman director Rupert Sanders appear alongside drawings and photos of Scherer himself to recreate the ‘rumor’ in his own image. Iconic representations of 19th century icons, pictures from Hollywood movies and tabloids, as well as personal pictures of the artist are arranged, framed and under glass as compositions or collages that put all these narratives on equal footing. What is real? What is invented? What is media?

An interweaving or imbrication of fictions, one within the other, is at work here. As with the Material Art Fair booths following one after the other, the VIP restaurant containing the SPF15 project containing the story of San Diego’s beach, and Arunandonchai’s film telling the story of an artist becoming an artist, there’s something ambiguous at play here; something ungraspable yet contained between the being, wanting, acting and telling of art and existence. **

Material Art Fair was on at Mexico City’s Expo Reforma, running February 4 to 7, 2016.

In London, Photofusion is hosting one-day group show Crossing the Black Atlantic with Juliana Huxtable and Derica Shields among its artists, while Harry Meadley, Sam Kenswil and Sam Keogh are in the lineup for Small bird’s nest with blue eggs inside at MMX Gallery. Santiago Tacetti‘s ISO 9001 will be his first UK solo exhibition, and Trust Magazine is launching at Ditto Press. Dena Yago, also of K-Hole, is in London to talk at the ICA and take part in Columbidae at Cell Project Space.

Outside of the UK capital, Auto Italia and Primary appear in conversation in Nottingham, and in Stockholm Body by Body, Jaakko Pallasvuo and Stefan Tcherepnin are showing at Minibar. Kari Altmann has a solo exhibition in Dublin, Mathieu Malouf is throwing a Total Sex Party in Mexico City and ‘Queen of Bounce’ Big Freedia is performing Berlin, along with DJ sets from Black Cracker and DREEA.

SOMETHING TO BE SCARED OF @ All Hallows Church, Mar 26

Header image: Felix Melia, All in a Clearing @ Lima Zulu.

Mexico City’s darkarts.international is bringing a group show to its space this weekend, titled Under a Thawing Lake and running from February 4 to 8.

The show runs simultaneously with Mexico City’s Material Art Fair 2015, celebrating its second season, and, not surprisingly, there’s quite a bit of overlap in the list of participating artists between the two shows. Dora Budor is included in the list, alongside Nico Colón with whom she is exhibiting at the fair with Paris’s New Galerie.

Also on the list is Renaud Jerez, coming off his group show for Lodos at the fair, as well as Puppies Puppies, who is performing as part of Queer Thoughts alongside David Rappeneau a and his solo show. Other participating artists include Candice Jacobs, Hannah Perry, and Yves Scherer, among eight or so others.

Mexico City’s first (and only) contemporary art fair, Material Art Fair, is coming back for its second edition this weekend, running at Auditorio Blackberry from February 5 to 8. 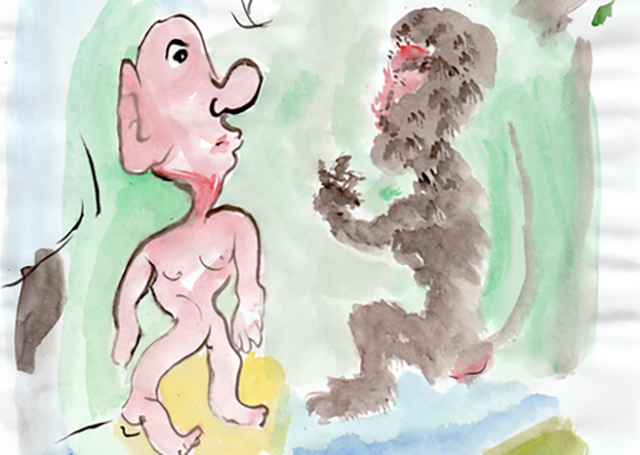 With Material Art Fair 2015 set to start in Mexico City this week, galleries and events of interest are bound to be centred around the Mexican capital. They include booths from Parallel Oaxaca, Queer Thoughts and New Galerie, as well as the Under a Thawing Lake exhibition presented by Dark Arts International, and an opening at Lodos Gallery.

In London, Space is showing work from three artist-run spaces including Piper Keys, The Duck and that of Caspar Heinemann, Morag Keil and Kimmo Modig from Life, while Viktor Timofeev is closing his Proxyah exhibition at Jupiter Woods and Dora Budor is appearing for an artist lecture at tank.tv.

Tabor Robak is one of the artists in a group show curated by Samuel Leuenberger called Constructed Culture sounds like Conculture in Dublin, Harm van den Dorpel has another solo show in Berlin, Caroline Ongaro is curating  Exquisite Collapse and Finnish performance group Vibes is presenting a site-specific installation at Helsinki’s SIC.