Kelly Bar is a Chinese cafe that “DOESN’T list abstruse and exotic Chinese dishes with bright names”. Instead, the press release says, it has sumptuous Italian sandwiches and “fragrant breakfasts”. It is a Westernized place that “fully reflects the imagined expectations of a young Chinese teenager” while walking along via Pellegrino Rossi in Milan.

Although the current project is shrouded in some mystery, with a website displaying the opening date, shimmering below a watery surface, the Berlin-based duo have previously collaborated in similar ways. With eStamina they presented a 60-minute ambient audio track accompanied by CGI in “a drugged fog”, as well as scripted contributions from 26 other artists, musicians, curators and neuroscientists.

Paris-based curatorial programme and exhibition space Exo launched another great exhibition this spring, curating the Check XXe group show at Brussels’s After Howl. Run by curator Elisa Rigoulet and artist Antoine Donzeaud, the curatorial programme invited seven international artists to take part, (with Donzeaud contributing some of his own work as well) for a show that explored the notion and linguistic complexity of ‘checks’—checks-and-balances, checks done to embarrass the parties involved, checks that subtly bring attention that there are people around you trying to mate, checks as agreement, checks as obesity, etc.

Paris’s Matthieu Haberard brings five new pieces—with a dark wood, epoxy, acrylic painting titled ‘Screen, where the touch, is a real sensation’ (2015), a can-and-water sculpture called ‘Combine painting’ (2015), a wood-and-electric cable piece called ‘Your time is running out’ (2015), as well as two sculptural installations made of steel, plexiglas, acrylic on canvas, titled ‘Marcel; Where the bulbs are?’ (2015) and ‘Stéphane; They took our…’ (2015)—while San Francisco’s Quintessa Matranga‘s shows a series of new cartoonish inkjet paper prints mounted on wood.

Some of the other artists include: Houston’s Adam Cruces with two digital video loops; Bending Binding with two sculptural radiators, a plastic-candy-and cooling liquid scultpure, and a neon light, as well as Belgium-born and Antwerp-based artist Yannick Val Gesto with a series of digital collages using 3D render semi-transparent print on brushed aluminium. Antone Konst and Hubert Marot round out the exhibition lineup with, respectively, a series of ceramic tile-on-panel large-scale oil and nail polish drawings and a cyanotype, spray paint, gallic acid on canvas piece. The last artist is Donzeaud himself with a large-scale silksreen print and aerosol paint on tarp and wood work titled ‘Ordinary Objects for Common Use (Couch)’. **

The Check XXe group exhibition ran at After Howl in Brussels from April 25 to May 9. 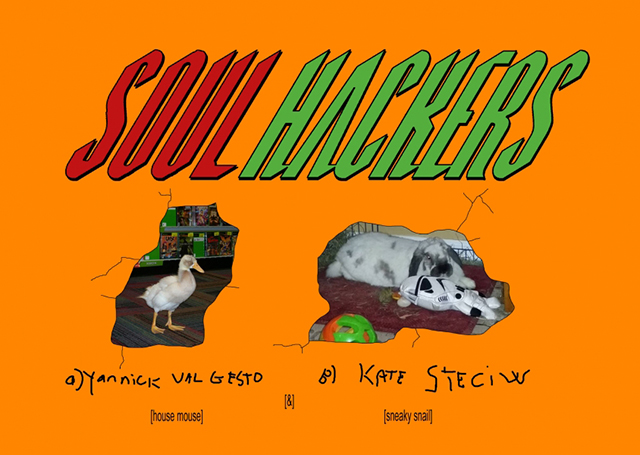