The Dreamlands: Immersive Cinema and Art, 1905–2016 survey exhibition is on at New York’s  Whitney Museum, opening October 28 and running to February 5, 2017.

Billed as one of the most technologically complex shows mounted in the Whitney’s new building to date, Dreamlands examines over a century’s worth of art by American, and some German, artists dismantling and reassembling the conventions of cinema —screen, projection, darkness.

The exhibition, which will take over the fifth-floor galleries and include a film series in the theatre on the third, is named after science-fiction writer H.P. Lovecraft’s alternate fictional dimension of an underworld visited only through dreams. Artists featured include Trisha Baga, Ivana Bašić, Dora Budor, Ian Cheng, Andrea Crespo, Pierre Huyghe, and Aidan Koch among others, in an immersive experience that utilises installation, drawing, 3-D environments, sculpture, performance, painting, and online space.

Artie Vierkant is giving a talk via Skype at Vienna’s Kunsthalle Wien on May 19.

The discussion by the New York-based artist on how the documentation of an exhibition can be more real than the original is a part of a series on the matter titled, L’Exposition Imaginaire and will be running on from its April 27 start to June 26.

How do exhibition venues deal with imaginary exhibitions, where imagination is the form of the show as well as its location?

Vierkant recently showed solo show Profile at Paris’ New Galerie, which examined and imagined the objectivisation of a human subject, one who has renounced all their rights, and abandoned their image. The upcoming talk might feature this understanding on loss and leaving things behind.

“Profile is an objectivization of a human-subject”, reads the first line of a text that drops down next to the event image —or profile —on Facebook. It continues: “Profile is ageless and has been programmed to be potentially immortal”, and “Profile is the reincarnation of the user, one that has renounced all his rights, abandoned his image, his voice, his hair to the realm of infinite malleability and interconnectedness.”

The exhibition text, which is written by Pierre-Alexandre Mateos and Charles Teyssou, curators of Paris collective sstmrt‘s recent Apartment show, positions Vierkant’s work as going in the opposite direction of contemporaries who inject subjectivity into virtual persona. Instead, they write in the long description that could almost be an obituary, Vierkant, who often works with notions of intangible property, abstracts a subjectivity, dissolving it into an “anti-predictive thing, liberated from the grid of reality to another matrix experience”… Is Profile dreaming of electric sheep?”

Untitled gallery is hosting their first solo exhibition by artist Artie Vierkant, titled A Model Release and running at the NYC space from November 2 to December 14.

Like many of Vierkant’s previous ones, the show deals with the notion of intellectual property. No, scratch that, the exhibition is intellectual property. The back room holds two patented works from Vierkant’s ‘Exploits‘ series in which he, licensed by patent holders, produced works like ‘Detachable storage rack for a metallic structure’ and ‘Air filter and method of constructing same’, while the front room displays a video, ‘Antoine Office, Antoine Casual’, depicting two photographic 3D scans of the same individual animated using stock motion capture data.

The result is a sly examination of not just representation and symbolism but of the rights of the individual to their intellectual property and their physical representation in the modern world, revealing the “amorphous boundaries that can exist within a single piece of intellectual property, and its expansive possibilities” and how the abstract territory between them gets negotiated and exchanged.

See the A Model Release press release for details. ** 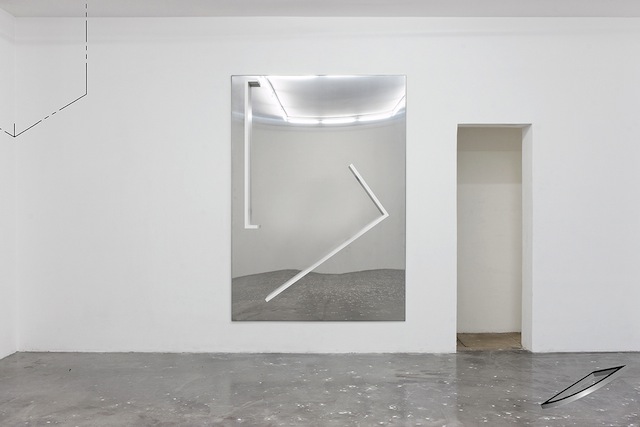