Rotterdam’s November Complex is hosting a ‘zomer strandkunst’ (Summer beach art) in collaboration with Peach at the Netherlands city’s Quarantaine beach on August 24.

There will be an exhibition on the beach with guests including Sol Archer, Antje Guenther, Robert Hamelijnck & Nienke Terpsma, Dico Kruijsse, Carolin Lange, Hunter Longe, Sebastien Seynaeve among more to be announced.

Bring your own drinks and sausages, as there will be a picnic and barbecue to follow which will carry on into the evening:

Ghislain Amar and Anna Maria Łuczak apartment art space, Peach, has played host to a number of exhibitions and collaborations with the likes of Essen’s New Bretagne/ Belle Air and Sofia’s Swimming Pool, while Amar is also apart of the November Complex project, along with Sighle Bhreathnach-Cashell, Christian Hansen and Hunter Longe.

Titled Life in 400BC (Iphigenia or A Girl for the Wind part 1) the workshop is conceived by Peach director, Ghislain Amar after the artist translated a play written in 1985 by Yves Mercol that condensed and echoed the Greek play by Euripides composed around 408 BC, and which was only written once in hard copy for Mercol’s students to act out.

During the week, participants are invited to reinvent the play, having read the rare Mercol copy, using only the technology and materials that would have been available in Euripides’ time. Interestingly, Peach have made this PDF downloadable via a temporary, dissolving and time-based WeTransfer link.

The workshop seems to be an ongoing exchange between the two spaces. New Bretagne/ Belle Air, also an artist-run space, presented an exhibition at Peach earlier this year that was prefaced by a two-day framing workshop given by the artists involved.

The L.A.I.F. Workshop (But How Are We Going to Make It?), a solo exhibition by Riama Nashlig at Rotterdam’s Peach, was a virtual show which ran from December 26, 2015 until January 31, 2016. It was a combination of regular photographs or digital photo-collage, occupying a limbo space on the occasion of the gallery’s temporary relocation in Frankfurt and was being shown at The Eeeast Theater and the Butcher shop V. ZIAJA.

The title is a wordplay with ‘life’ and there is no actual workshop, however it is used as a metaphorical one and a reference to Riama’s photographic practice. The content of the photographs are diverse and lack any one defined interest or centre point. Instead of focusing on one subject, the photos approach ‘life’ from a more peripheral standpoint that becomes performative in its witnessing.

The titles and images are collaged together in a poetic way. The immediate and lo-fi aesthetic captures groups of people, zoomed in faces or the backs of heads, as well as empty hotel rooms, restaurants, a butcher shop, a theatre and city skyline. In some, text is pasted on in a clunky way, while others are read through the titles that remix their content:

Boys too Men 2015 Inst. view, Room B/ A certain irony and togetherness towards simulacra and spectacle that actually ends up forming a certain sincerity/ Climate 2 (democracy- paranoia vs awareness) / How to be vulnerable again (I’m not a Robot) / I had wanted to come here before. But in which city do I really want to live for the rest of my life – 31.08.2015 / I  feel it when I listen to Sacrifice by Elton John 1999 / Late night feeling oceanic, 2015 / **

Rotterdam-based artist Ghislain Amar will conclude his residency with air_Frankfurt at the project space, Projektraum Basis with a solo presentation, Amar Amar, opening on March 24 and running by appointment until March 28.

Amar has been working with Air_Frankfurt under the broader banner project: ‘state of the city’, which as a title is being investigated by five other artists in residence across Germany, Belgium and the Netherlands before culminating in a larger collaborative exhibition later this year.

Expect, then, in Amar Amar to see responses to themes of trade and inter-connectivity between city life and socio-cultural contexts.

Amar runs Peach in Rotterdam which as a space has shown at Swimming Pool. He has exhibited with Pracownia Portretu and is included in an upcoming group show at Poland’s BWA Tarnów titled Working All The Time.

Rotterdam’s Peach exhibition space has invited Samet Yilmaz for a new project titled I have to change myself to stay to same that will be available for viewing from December 18 to January 31, 2016.

The Netherlands art space, which is based in an apartment in Rotterdam and run by Ghislain Amar and Anna Łuczak, has invited Yilmaz to consult about “the balance in life”, after which they will rearrange Peach’s interior based on the ancient wisdom of Feng Shui.

The project will be available for viewing via a virtual tour at Peach‘s as well as Yilmaz respective websites. 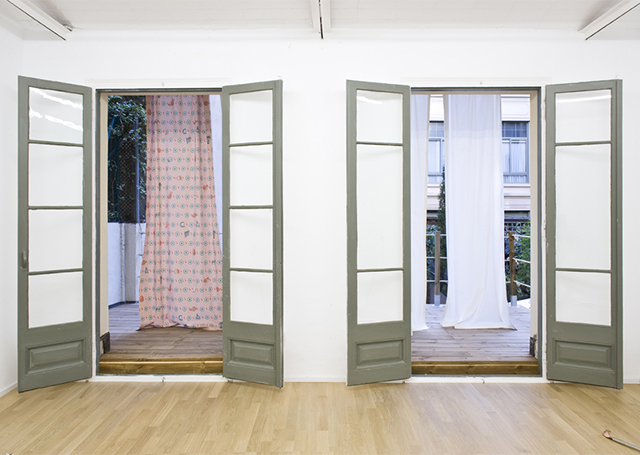