The Shanaynay benefit show 2017 is on at Paris’ Shanaynay, opening October 13 and running to October 29.

The works on sale will support the future program of the gallery. Some of their recent projects have included Karl Larsson’s solo exhibition Camilla and group exhibition A Sieve Itself May Sieve with work by Kelly Akashi, Talia Chetrit, William King, and Tori Wrånes.

Oracle brings a new group exhibition to its Berlin space, titled The Way of the Novel and opening tonight, May 27.

The premise of the show takes root in the changes brought into being by the invention of Romanticism at the end of the 18th century, and the idealized notion of the impoverished, misunderstood genius working in solitary and eternal glory.

“Today,” The Way of the Novel writes, “this trick doesn’t work anymore, now the carrot goes by the name of artistic entrepreneurship.” In other words, whereas to be unappreciated was once a sign of authenticity and a kind of moral artistic success, nowadays only success is a sign of success. Inviting a handful of artists—including Thomas Jeppe, Flora Klein, vocaloid avatar Hatsune Miku, and Agatha Valkyrie Ice—The Way of the Novel comprises various perspectives on the possibilities of this evolution. 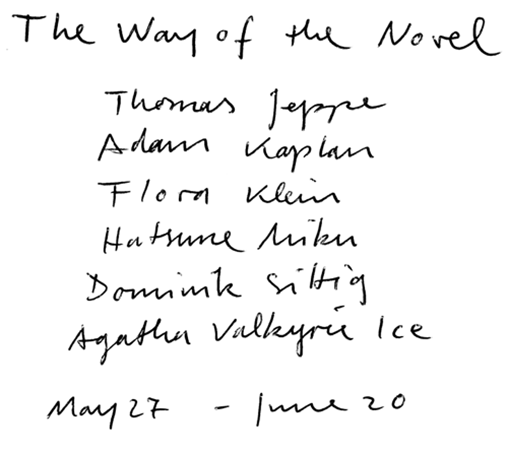 A play on art ascribed by chromosomes, group exhibition X is Y –running at Berlin’s Sandy Brown from March 6 to April 18 –provokes, “tell us again how women are free”. Ella Plevin is the author of said quote, taken from a text that comes with the room sheet noting the show’s Richard Kern short-film namesake, challenges gendered identity, questions ideas of ‘radical femininity’ as constructed by men and mentions that women haven’t always had control over their own bodies “(we still don’t btw)”. Hence, “A mop, a selfie, white goods, a diss, #heelconcept, an attitude, hair clips, pastels, sentiment.” It’s a list of words that are not only the object-ingredients of this group show taking its name from Kern’s three-minute 90s art porn, but it represents the work of seven artists (and one other group exhibition) that “both wield and oppose the codes of prescribed femininity”.

Nearest the entrance of the single-room exhibition space Daphne Ahler’s ‘hair clips’ (2014) are propped on the edge of a heater. The two fragile aluminium sculptures are irregularly cut out and look as if they’re the property of a large baby doll. A pair of neon-coloured wooden shoes with brushes attached to the sole are on display in a glass box, half filled with soapy water. It’s held up with the help of four coloured mops elevated from the ground and called ‘Aircleaninglady’ (2015) by its Norwegian duo creator Aurora Sander known for creating narratives using sculptures and mechanic objects.

The most arresting part of X is Y is undoubtedly Anna Uddenberg’s life-sized hyperreal sculpture ‘Jealous Jasmine’ (2014). With one leg bent almost uncannily high up in the air, a long haired human figure bends aggressively over a pram, grabbing it with both hands and lifting the front wheels from the ground. The faceless pastel-coloured cyborg is dressed in what looks like a future fighter’s outfit from a computer game, plus beige-y winter puff-jacket. Another sculpture by Uddenberg, ‘Nude Heart Spinning’ (2014) was first shown in Stockholm nightclub Vårbergs Dansservise slowly rotating like a disco ball. Here it hangs cracked and on silver chains in a far corner and leaves a question mark on what left poor Jasmine jealous.

Flora Klein’s vibrant swirls don’t attempt an answer in her ‘Untitled’ (2014) paint on canvas but Juliette Bonneviot perhaps suggests a preventative measure in the contraceptive pill and aspirin in epoxy resin that make up part of her textured ‘Xenoestrogens Grey #2’ (2015) pastel colour theme. Daiga Grantina’s crumpled silver clash of materials, near to Uddenberg’s spinning heart is the second in anatomical signifiers with its respiratory reference of ‘Pneum’ (2015) lying flat an flaccid on the ground. The sculpture is sprayed with metallic paint while Kirsten Pieroth’s readymade tumbler of a clothes dryer called ‘Oracle’ (2014) lies aslant and open to reveal an inside spattered with pigment that no doubt took a turn in the process.

A framed publication from another pointedly all-woman exhibition hangs on opposite walls, held at Atelierhof Kreuzberg in 2009, the show featured friends and artists that counted Petra Cortright, Aleksandra Domanović, Dena Yago and fellow X is Y contributor Bonneviot among them. A light-hearted response to an earlier all-man show called Larry’s and followed by an all-gay group called Garry’s, the six-years-old publication features a pile of pages pressed behind glass and showing the artists working, taking a shower and forming a human pyramid, all dressed in the same white t-shirts and denim shorts. The presence of such scenes on either wall of the Sandy Brown gallery is discomfiting to say the least. They’re a timely reminder that times have changed but the issues remain the same. **