This week Helsinki-based production duo Biitsi premiered their ‘WFT (We Feel This)’ music video, directed by Olli Leppänen,on AQNB. The film is an eerie rendering of Heidi M Wee and Kimmo Modig‘s decades-long relationship and developing musical collaboration, in the couple sharing body parts and jointly making a smoothie to the spectral undulations of the song. Titled ‘We Feel Trance’ in their live folder, that track is less about the 90s electronic music genre and more the freaky hypnosis of an altered state of consciousness. For their follow-up mix, however, the references to melodic phrases and ecstatic buildups are more present.

’BIITSI’S AFFECTIONATE SAMPLER FOR AQNB’ is a 10-minute selection of Biitsi works-in-progress, where a droning cosmic opener carries into degraded microtonal melodies and an epic synth line. Less beat-oriented but still echoing with the residue of a dance music awareness, the mix draws from the broad cross-disciplinary portfolio of Wee and Modig, which includes their formative musical years in rock and nu-metal bands. There are instrumentals taken from a live performance-reading with writer Nora Khan in August, as well as what Biitsi call a “messy version” of the aforementioned ‘WFT’ track. The accompanying artwork is a photo of a Fiorucci handbag found at Modig’s bag-maker parents’ house: “It felt so surprising to find this cult disco-era item from their back room and felt perfect for this mix.”**

Biitsi is performing at Turku’s XS Festival on November 25, 2017.

The first Episode aired on May 2 and will be played once a month for the next 7 months. With excerpts from the book’s “account of loss and being alone in a self-started journey through the US, Europe and the Middle East” read out by Kretowicz and interspersed with what sound producer Kimmo Modig describes as “paranoid pop [and] vertigo soundscapes,” the project is part of forthcoming novel and live audio book Somewhere I’ve Never Been co-published by Berlin’s TLTRPreß and London’s Pool.

The launch is taking place at London’s The Yard on May 14 where a live audio rendition of the book and immserive collaboration involving a host of artists, friends and ‘characters’ featured in the book including live performances by Good Sad Happy Bad, Micachu, Tirzah, and Coby Sey, as well DJ sets by Imaginary Forces, felicita, and Aimee Cliff (Angel Food), video projections by Ulijona Odišarija, compering by Brother May and a choir called AKA Pellah.

There is no press release as such, however the Facebook event page is continually updated with ‘kimmoscopes’ such as “Lots of cards, lots of questions, no time to make sense of it all. Try to find people you can trust who share that feeling” and “You feel comfortable being around maximum two other people,” as well as digital images from Social Anxiety Matrix series. 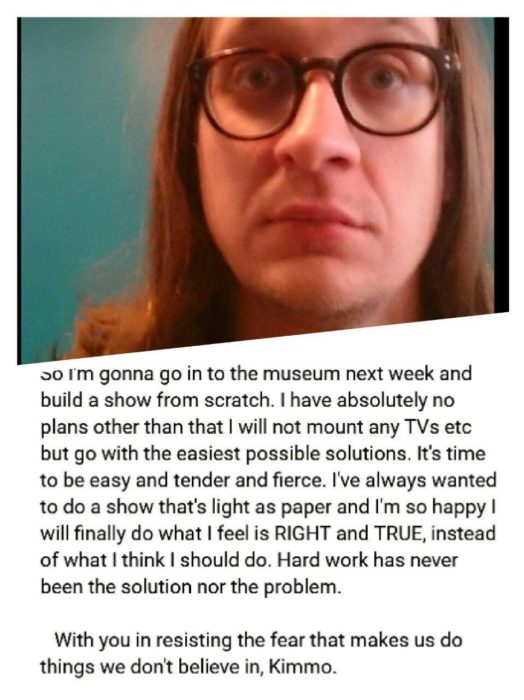 Steph Kretowicz (aka AQNB editor Jean Kay) is launching a novel, Somewhere I’ve Never Been, with a “live audio book” rendition of the text at London’s The Yard Theatre on May 14.

Created with artist and sound designer Kimmo Modig, the event will be an immersive collaboration involving a host of artists, friends and ‘characters’ featured in the book. Those include live performances by Good Sad Happy Bad, Micachu, Tirzah, and Coby Sey, as well DJ sets by Imaginary Forces, felicita, and Aimee Cliff (Angel Food), video projections by Ulijona Odišarija, compering by Brother May and a choir called AKA Pellah.

The event draws on a forthcoming podcast, audio book and radio show — also produced with Modig and accompanying the Somewhere I’ve Never Been book — to begin broadcasting on NTS Radio in late April. The multi-platform narrative, co-published by Berlin’s TLTRPreß and London’s Pool, expands on the text, which consists a cohesive selection of non-fiction essays exploring international soundscapes as an expression of heavily mediated, networked mobile environments.

The event is produced alongside The Yard’s Dan Hampson, as well as artists Sey and Levi of the Curl label and collective.

The False Walls group exhibition at Perth’s Pet Projects is opening November 6 and running to November 20.

The show features work by Liam Colgan, Tanya Lee, Quintessa Matranga and Kimmo Modig to explore social convention and collaboration from a distance through a lens of boundary, defence mechanism and personal space. During the de-install of the show there will be a text released by co-creator of Pet Projects, Andrew Varano.

Pet Projects is run by Dan Bourke, Gemma Weston and Varano and is located in an industrial area outside of the Western Australian capital’s city centre, regulating a series of events and happenings.

Kimmo Modig is presenting I, Design at Helsinki’s Kattilahalli on October 28.

An ongoing project between the Helsinki-based artist and Video in Common (ViC), the event is a continuation of its first iteration, called Listen to Yourself: Sound Design Tutorial with Pappa Modig, during a residency at London’s Space in August. The performance presentation is an interactive sound design workshop, produced by both audience and artist, while running through the clichés, ideologies and political meanings of certain sonic elements.

Questioning the role of a designer in ascribing value, power and status to cultural production, the video material (produced with ViC in London) stems from a filming session around Hackney Wick, with Modig performing empty gestures in front of cameras, destined to be given meaning only at the edit.

Berlin-based artist Max Grau speaks about working from bed and its connection to contemporary working conditions for artists, but also more personally to his experiences with depression. Finally, Penny Rafferty writes about mortality in connection with the representations and distribution of images of the digital self online.

Music interludes for this episode are provided by Perth-based artist and musician, Mei Saraswati.

See here for Episode #02 and the Status Effect website for details. **

Curated by Valentina Fois, the show features work by Morehshin Allahyari, Leah Beeferman, Kate Durbin, Faith Holland, Brenna Murphy and Megan Snowe, and explores the tensions of functioning within an online space; its transience and eternity, freedoms and limitations.

Connected by a running commentary written by Kimmo Modig between all of the works, the exhibition explores these paradoxes and juxtapositions through work exploring the way we portray ourselves online and to others.

The website for the exhibition is designed by Fois and Beeferman, and additional text written by Fois, Snowe and Modig.

With new systems and infrastructures come new ways of organising information, new ways of thinking, of coming together. In light of this notion, AQNB editor Jean Kay, and Video in Common (ViC) founder Caroline Heron visited London’s Assembly Point, with an event called ‘At the Backend’, last Friday, May 6, to contemplate the theme of the Peckham gallery’s three-week Tableaux programme, in a very literal interpretation of its dictionary.com definition being, “a picture, as of a scene.”

‘At the Backend’ followed on from the ‘The Future Is Here, It’s Just Not Evenly Distributed’ screening at Berlin’s Import Projects in March by considering AQNB‘s forthcoming website upgrade, and the questions and developments that emerge when reformulating the categories, formats and frameworks for presenting information to an international audience. We examined the work of some artists within our global network that somehow addressed or embodied these semiotic shifts that come with networked communication, and its influence on community-building and identity-formation.

These included AQNB/ViC editorial video commissions by two Berlin-based artists —’ASMR-tist’ Claire Tolan discussing her practice born from the YouTube community concerned with the Auto Sensory Meridian Response phenomenon, and Anna Zett talking about constructing and editing narratives around an initial claim into video. Helsinki-based artist Kimmo Modig contributed a  video—consisting of outtakes from sessions leading up to a work presented as part of curator Valentina Fois‘  The Utopia Internet Dystopia pavilion at last year’s The Wrong biennale —especially for AQNB, as a response to the affective labour and techniques of YouTube celebrities.

Los Angeles-based collective Encyclopedia Inc. shared two videos that illustrate a widely varied approach to their ongoing interest in uranium. The symbolic and physical properties of radiation becomes the sole anchor of a responsive, research-based practice that eschews any drive towards a single identifiable aesthetic or mode of working.

Ashley Angelus Ashley presented a live reading of her religious poetry via Skype from her base in Philadelphia. That was followed by a Q&A where she discussed her shapeshifting practice and still-evolving sense of self in an often oppressive digital regime that has negatively exposed her as an artist, writer and person too young. Ashley continues to actively evade identification while exploring the parallels between, and ritual practice of institutionalised religion and popular culture. Meanwhile, collectives like Johannesburg’s CUSS Group passively confuse and elude classification within global (see: western) internet convention, by promoting misinformation through inaction when it comes to readings and representations of their work outside of their own self-presentation. Taking footage appropriated from artist-musician Dean Blunt‘s 2014 ‘DEF Freestyle‘ single and re-presenting it in a pop-up exhibition from the back of a car as part of their Video Party series in Johannesburg, Geneva-based co-founder Ravi Govender discussed the groups disinterest in regulating the distribution of their work and identity outside of their own context, in opposition to the hyper-constructed artistic identity of an artist like Dean Blunt. Rather than try to be understood within a proscribed informational system, CUSS Group dismiss its authority entirely.

Below are the full videos, excerpts (and video stills) of the films and readings presented in their running order:

Berlin-based artist Claire Tolan discusses YouTube-born phenomenon ASMR (Autonomous Sensory Meridian Response) and how it informs her art practice. From mixing ASMR sounds on the radio to organising live ASMR Karaoke events, Tolan’s work and interests are centred on how strangers come together online and communities are formed alongside new technologies.

Berlin-based artist Anna Zett talks about gathering empirical evidence of the attitudes and perspectives surrounding her chosen subjects, including dinosaurs, boxing and the brain. Prior to her most recent video work, ‘Circuit Training’ (2015), Zett’s impressive “modern research drama” ‘This Unwieldy Object’ (2014) saw her dealing in the construction of raw data into meaningful narratives along existing ideological lines.

Philadelphia-based artist Ashley Angelus Ashley seeks to reconcile her religious poetry with the social experience of exploitation and oppression. Taken from the position of what she calls a “sexually androgynous Catholic woman”, Ashley presents a live poetry reading via Skype, covering the stigmatization of gender nonconformity, ritualized humiliation, the sex industry, internalized misogyny, and biological control.

LA-based collective Encyclopedia Inc. –Carlye Packer, Googie Karrass and Nicholas Korody –is a research-based project that interrogates the inherited western idea of an object in isolation. In a continually evolving, process-driven practice that questions notions of art and information as self-evident, the group has produced publications, videos and installations reflecting a conceptual approach to the lived reality of ecological enmeshment, with uranium at its core.

Helsinki-based artist Kimmo Modig deconstructs the languages and systems surrounding labour and production by both mimicking and destabilising an audience’s conception of capital flows in its various forms. Modig performs his own anxieties and sense of precarity in relation to the existing lexicons of communication media –like video, marketing and sound design –thus laying bare the oppression and authority implicit in the restrictive social paradigms they reinforce.

Johannesburg and Geneva-based collective Cuss Group –Ravi Govender, Jamal Nxedlana Zamani Xolo, Lex Trickett, Bogosi Sekhukhuni and Chris Mc Michael  –have been working as a dispersed group of artists and practitioners on the margins of not only a South African art market indifferent to video as a medium, but a globalised online network of artists still focussed on traditional Western economic centres. But instead of applying for impossible access to these systems and flows of information, Cuss Group passively evade legibility within existing colonial structures surrounding art and aesthetics.