Ben Buswell is presenting solo exhibition The Story is Not the Story at Portland’s Upfor Gallery opening October 18 and running to December 2.

The Portland-based artist will give a talk on November 4 at 4pm to discuss his new series of glass and photo based sculptures which have been made using scratching and melting techniques to explore the material quality of process.

Zoning in on micro images of the naturally occurring volcanic glass Obsidian which were taken at Orgeon’s Newberry National Volcanic Monument, the photographs go through a number of processes to become sculptural and something new, for example he “carefully pressed a flag of the United States into a bed of white frit (silica granules), then heat fused the frit, resulting in a crystalline debossment.”

The show features eight works on paper and two video installations of “overwhelmed female bodies, desperately trying to adapt to a decaying, physical world that is consumed by image and simulations.”

The press release comes with a text describing a seductive space at the ocean floor, revealed when the water recedes during the calm period before a tsunami hits. This “imagined ocean at low tide as their setting” features a series of 3D renderings, and photos the New York-based artist’s sculptures, paint, and found images, to depict yoga poses in plastic and Mermaids surrounded by the detritus of ‘Snapchat-like’ filters and special effects.

Low Tide is the last of a series of three exhibitions — including Morehshin Allahyari and Brenna Murphy — which will culminate in a collaborative presentation, opening August 23 and running through September 2.

Morehshin Allahyari presents solo exhibition She Who Sees The Unknown at Portland’s Upfor Gallery opening June 1 to the 24.

The installation will include sculpture (3D printed), text, moving image as well as a research archive within the public reading room and will “re-figure dark goddesses from Middle Eastern mythology.” The New York-based artist is currently a Research Fellow at the Eyebeam Art and Technology Center.

The exhibition was first presented at New York’s Transfer Gallery, and is the result of two years of research into “the effects of digital colonialism and other forms of contemporary oppression,” placing her work between art and activism.

With time (or lack there of) playing a key role in how we move about in our daily lives, heading to a gallery to see a show can sometimes feel heavy in the efforts of planning a day out rather than a casual encounter. Online artist residencies and social media takeovers are increasingly common, and they make a lot of sense. Whether you are the artist or the viewer, there are positives associated with its wide reaching and instantaneous capabilities.

Integrating art viewing into a daily scrolling ritual not only moves more fluidly with the scroller, it situates that experience alongside a number of other narratives and platforms. These spaces are often set up as an attractive alternative to the glass ceiling of galleries and institutions that legitimise ones practice through the power of its reputation. While there is still a level of administration, coding and labour in the back end of an online exhibition, these spaces often provide a more accessible and less costly platform to experiment and support emerging artists.

There is also the reality of self-publishing and the need to keep up with the immediacy and autonomy of self-sharing. The potential for decentralising the art conversation and opening up an international dialogue is there, but the internet is not a separate space from ourselves. It’s rather an extension that carries with it the same politics of the real world, raising similar questions: What is the currency and value of labour on the internet? What’s the difference when work is shared through an organisation rather than the individual? The online residency is a comparatively recent practice, and one that is continuing to grow.

Here are some online residencies, in no particular order, worth a scroll-through:

The White Pube is run by “art baby gods” Gabrielle de la Puente and Zarina Muhammad. As well as exhibiting, curating and writing weekly reviews, their website is host to an online residency that features a different artist each month. Prince January is the current resident, with past participants including Sarah Boulton, Rafia Santana, Christopher Kirubi and aqnb‘s own assistant editor hp, among others.

Muhammad and de la Puente’s White Pube personalities span across other social media outlets, gaining a following from their playful and accessible approach to art criticism. The programme began in 2015 as a space for both artists to share their thoughts publicly. A desire to expand the conversation and to create an opportunity to “shine light on people we think need fairy lights around their heads” led to its current form. They are now office residents at London’s LUX.

Run by artist Fabio Santacroce, the Bari-based project space gets its name from the multi-floor staircase it uses to hold exhibitions and events. 63rd-77 STEPS was started in 2014 with Amalia Ulman‘s Landing Talk, since extending into off-site locations and its own website hosting online projects. Each space is chosen for site-specific reasons and a curatorial aim to explore “the periphery” both spatially and metaphorically.

Some previous online projects include Nina Cristante‘s series of Youtube videos fitness povero-homeworks (2015) and the Francesco Urbano Ragazzi-curated A Mystical Staircase (2016) which featured tarot cards made by 22 artists including Sarah Abu Abdallah, Karl Larsson, Gina Folly and Tabita Rezaire among others.

The Basel-based art space, run by the Christoph Merian Foundation, began in 2011 and provides curators with a space for two years to carry out projects. In 2015, it began running an online programme, beginning with web residency # 1, Juliette Bonneviot‘s Xenoestrogens. The projects are placed within the webpage scroll among other events and announcements, and take the form of a dropdown.

Founded by Kiera Blakey and Matthew Hughes, the UK-based organisation began in 2012 to support early career artists, commissioning projects both online and off to produce live and digital exhibitions. From 2012 to 2016, Legion TV was host to a number of artists including Adham Faramawy‘s Total Flex 2 (2012), Samara Scott‘s Basic Instinct (2013) and Annwn Collective‘s The Return from Annwn (2016-17) among others.

Stay tuned for the 2017 set of programmed projects coming up, which will explore ideas around collaboration through digital space.

Cosmos Carl is a strictly online platform that “hosts nothing but the links provided by the artist.” The works have taken on many forms, with recent projects including Jack Fisher‘s We Are One dropbox link, Maria Gorodeckaya‘s Sad Face Feminism Tumblr page, an Instagram account by Nora Hansen and an intervention on Casting Call Pro by Sophie Hoyle.

Upfor Gallery is a contemporary art space based in Portland, and also runs upfor.digital, a website for online exhibitions. Now running, the Rose group show, curated by Valentina Fois, is experienced by clicking right from one artist to the next using an arrow at the bottom right hand corner of the screen. Flowing from one to the next seamlessly, the project features works by Morehshin Allahyari, Leah Beeferman, Kate Durbin, Faith Holland, Brenna Murphy and Megan Snowe, and includes text interruptions by Kimmo Modig.

Schlosspost  The new web residency is part of Akademie Schloss-Post and invites artists to apply for a four-week slot on the webpage to explore a digital project. The residency began in 2016, and funds successful applicants through an open-call process, asking them to respond to a theme.

The first theme Decentralization of Internet Art was curated by NETRO, the second call Re-Entering the Ultimate Display curated Mario Doulis, and the most recent SUPRAINFINIT: L’Avenir Redux curated by Apparatus 22.

Run by Marenka Krasomil, the online space supports the process stage of developing concepts and ideas, with an aim to “have fun.” They are currently hosting ‘[Middle Class]‘ (2016) by Andrew de Freitas and the current resident is Lina Hermsdorf. Past projects include Verena Issel‘s chat-based online soap opera exploring voyeurism and self-profiling, and Balz Isler‘s daily online drawings. After the residency is finished, the work is taken down and exists on in screenshot format.

Run by Epp Õlekõrs and Keiu Krikmann, the Tallinn-based non profit gallery occupies two spaces: a small physical one in the city centre and konstanet.com. With a focus on “international collaborations” with emerging artists, the aim is to merge both realms and develop a conversation between the two spaces. Current residents are Maria Metsalu + Nikola Knezevic, who worked together to create dreamy Vimeo sequences, you can click back and forth between.**

Featuring his four films premiered at the 2013 Venice Biennale, including ‘Comma Boat’, ‘CENTER JENNY‘, ‘Item Falls’ and ‘Junior War’, the Anniversary screenings will run at varying times, in that order, with only ‘Comma Boat’ going for the duration of the exhibition. So best check up on the (approximate) playing times on the gallery website.

See the Upfor Gallery for details. **

Beginning in traditions of gestural abstraction, Featherly’s latest collection of oil and enamel paintings take cues on colour, form and meaning from a host of diverse sources, including ASCII computer codes, TV graphics, ukiyo-e, and “Doonesbury”.

Moving further away from the clip-art aesthetic Featherly called upon in recent decades, Unpattern maintains its conceptual virtual origins, swathing them in brushy abstraction with pieces like ‘Unpattern5’, below. 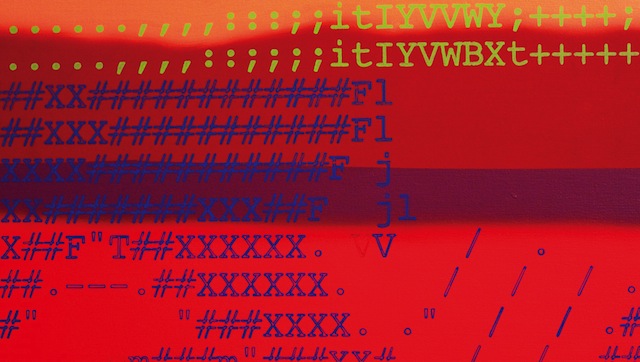 Alex Rose will be presenting his latest exhibition, titled Another Furrow in the Forehead, at Portland’s Upfor Gallery, running June 5 to 28.

In collaboration with New York’s Envoy Enterprises, Rose’s exhibition uses photography and painting, incorporating various materials through ritualistic cycles of creation and destruction into complex, haunting collages that explore the fragility of the human condition.