Alex Turgeon is presenting The Ouroboros in the Cul-de-Sac (Part 1) at London’s clearview on November 18.

The performance is taking place after a one-week residency in the Tottenham space that explored the concept of facsimile “within a queer reading of domesticity in relation to capitalism and gentrification.”

Turgeon’s work often focuses on emotional states of expression and where they are housed and cultivated through ‘architecture, simulacra and mimetic rivalry,’ as well as how this relates to the management of our bodies through various structures.

The Soft John Poetics and Hard John Poetics dual–event at Berlin’s gr_und is taking place on September 26 and 27.

Run by Cc:, the first event Soft John Poetics on September 26 is part of a monthly event looking at poetics and includes contributions by CA Conrad, Caspar Heinemann, Zoe Darsee, Zan de Parry, Fette Sans, Alex Turgeon and others to be announced shortly.

gr_und is a nonprofit space dedicated to hosting exhibitions, workshops, live web radio and other formats to re-adjust the “status quo of the commercial art world.”**

Alex Turgeon opened his solo exhibition, Charon’s Obol —running at Berlin’s Center from August 19 to September 4, with an impassioned, gnomic performance that resisted expectations and categorisation in equal measure. Part reading, part conjuring, part immolation, it managed to both subvert and exemplify the qualities that make Turgeon’s art special. The Berlin-based artist is known for creating installations of a refined and subtle complexity, as well as for writing practice that combines the associative character of spoken word poetics with a romanticism that evokes the legacy of North American transcendentalist literature and canonical British Romantics like John Keats.

With the sun setting over Gleisdreieck Park, the artist’s voice blasts from a speaker situated outside the glass walls of the gallery. Turgeon appears in a white T-shirt, jeans and stocking feet with a microphone protruding from his mouth reading from the pages of a lengthy poem and striding across the narrow space of the gallery like an imprisoned animal. During the reading, Turgeon tears at his work, ‘Another Brick in the Wall’—a plotter print image of stylised bricks covering the main wall of the gallery—and feeds the strips of paper through an electric shredder.

The exhibition, taking its name from the Ancient funerary practice of placing coins in the mouths of the deceased as a means of propitiating the mythic ferry pilot Charon, presents a densely intertextual network of literary and cultural references. For example, the David Foster Wallace-referencing sculpture, ‘Consider the Lobster’, consisting of disembodied concrete feet, pierced by rebar and pinched by clam shells painted with nail polish, serves as an apposite starting point for an exhibition concerned with notions of transition. The shoeless concrete feet seem to speak of anything but the lifelessness of the mafia “burial at sea” euphemised by the expression “concrete loafers”.

Above the remains of ‘Another Brick in the Wall’ is the sculpture ‘Plenty of Fish’, an arm protruding from the wall and attached to a galvanised steel bucket. The first time I passed the container it was empty which, given the references to fishing culture throughout the show, struck me as a deepening of it’s exploration of the ways in which death and life inscribe themselves on each other: an empty fishing bucket speaks of a dead marine ecology, but also of a deprivation of the livelihood for the fisher who depends on the catch, and the deaths it implies, to make a living.

The dynamics and aesthetics of life, death and afterlife also inform ‘I see my stoned face against your smile, hook, line and sinker’. The sculpture evokes a balance-scale holding a disembodied mouth in suspension with an anchor-like hook. It’s hard not to think of the Egyptian god, Anubis, weighing the hearts of the dead against a feather, standing before the work. One must take care not to over-literalise Turgeon’s work, or to draw metaphors too tightly, but with Charon’s Obol, he clearly manifests his determination to continue to trawl the deepest waters in search of newer, stranger species of emotion.**

Alex Turgeon’s Charon’s Obol is on at Berlin’s Center, running August 19 to September 4, 2016.

The free event and three-day programme, founded and run by artists, features exhibitions, performances, publications, screenings, workshops and seminars —as well as one-day symposium —responds to the increasingly nomadic nature of artists and artistic practice, questioning “how we live together in a global community”.

The project began in Vienna in 2003, then carried on to Los Angeles and is now in Berlin, where the theme this year is ‘The Imperceptible Self’, it will be documented in texts and contributions to be published in the third edition of ELSE – The Journal of International Art, Literature, Theory and Creative Media.

Events to look out for include:

A conversation about how “we live, work and think in the space between the no longer and the not yet” called Encounters, with Julieta Aranda and Elise Lammer, on August 5.

The Processed Beings: Intersubjectivity and Authorship group exhibition, curated by Lou Cantor and William Kherbek and running from August 5 to 6. It features the likes of Martin Kohout, Alex Turgeon and Anna Uddenberg, and includes an associated reading with Sarah M. Harrison, Felix Riemann and Tess Edmondson, plus more, on August 6.

Public readings and discussions for research and exhibition space, Halcyon, with Mehreen Murtaza among the participants, on August 5, 6 and 7.

The ‘HOW 2 DO: being other, being real‘ video screening featuring works selected by curator Gaby Cepeda and featuring work by Hannah Black among them on August 5, 6 and 7.

See the Transart Triennale website for the full programme.**

Irregular Readings II is on at Berlin’s Exile on July 30.

Hosted by artist Nancy Davenport —whose Polaroids exhibition is currently on show and will close an hour prior to the event —the programme presents “vocal actions” by artists and writers including Alex Turgeon, Hanne Lippard, Martin Kohout, Patrick Fabian Panetta, and Steven Warwick.

Of the aforementioned artists, Lippard, Kohout and Warwick have each taken part in an aqnb x Video in Common video editorial collaboration, with each artist extrapolating on their work across disciplines, including spoken word, publishing or even script-writing.

Aided by Google image search, a depicted figure lies sleeping on a torn piece of white paper. The dreaming body is an orthopaedic marvel, a digital beauty, its skeleton inside and muscular outside rendered perfectly in x-ray and 3D. Drawn in by this edited image, a work by Kyle Joseph, and Ying Colosseum, I click attend to a one-night-only event, Late Nite Lullaby at heavy metal bar Blackland, on February 7. The motivations and processes leading up to Ying Colosseum’s ‘collisions’, a term used by Ying collective member Penny Rafferty, are perhaps as interesting as Ying’s adverse exhibitions. The recently born artist group, for instance, make all of their planning decisions in the front passenger carriage of the Ringbahn, an overland train that circles Berlin 24 hours a day and 365 days a year.

Ying’s chosen course, an escape hatch from the microsphere of the white cube can be found in recent patterns of internet-addressed art. Their exhibitions are installed and photographed in genre-class situations, effectively retouching and reformatting their respective host, a post-digital reflex, one foot in the romantic real and the other in the social feed. It seems to recall the ‘premiere’ of New Scenario, an artist collaboration, often profiled on aqnb, who launched their first project in early 2015 with a David Cronenberg-inspired exhibition called C R A S H. What is interesting about Ying and their peers, though, is how an understanding of the internet (and the social simulation it so often implies) has created the possibility to re-route viewers offline, riding along the screen’s edge, a psychogeography of sorts.

Perhaps no work in Ying’s recent exhibition better supports the idea of a body wearing the internet out than ‘Untitled, pullover (black)’ (2016) by Alex Chalmers. Inside a display case for Blackland merchandise, a generic black jumper hangs like a shrine to the music occult. More wearable fan paraphernalia is for sale in the background, a 15 euro t-shirt, branding oneself, not as a logo, but as a club culture participant. More interestingly, Chalmers’ performative-based art practice typically relies on the use and effect of social interactions and human negotiations, which produce outcomes that are consciously minimal, while co-opting ready-made services like online shopping, 24-hour printing and door-to-door delivery. Materially assisted in this way, his ‘decision-free’ art reveals the unquestioned assumptions of an all-giving customer helpline and the complications of using a labor force primed for ‘service’.

“They had to decide”, reads a line by Nina Kettiger, “between pretty and unique”, one of many covered song lyrics she has repurposed for an ongoing series of performances and pop-inspired prints, entitled Highlighting highlights (2016). Delicately pinned to a gaffer-tape wall of concert posters, bands like Doomed, Post Mortem and Fatal Embrace, Kettiger’s glossy tribute to a Britney Spears impersonator called Alejandra Vergara, is a teenage anomaly that sings “I’m not a girl, not yet a woman”. Positioned between Blackland’s public toilets and the cigarette machines, the artist’s account of a young-girl fantasy reveals a latent message about art and music: a play-hard scene, a stage crowded with men, impersonators acting like stars.

Under dimmed lights near double glass doors, Camilla Steinum’s lookalike tablecloth, ‘I’ve stopped eating stuff from the floor’ (2016), is caressed by hand —an unconscious outline of a butt —before the eyes adjust to reveal this visual and textural pleasure for the first time. There, her hand-dyed, hand-stitched carpet is lifted from the floor to chair-height, a plush surface to start conversation as smoothly as the beer bottles, ashtrays, cigarette lighters and mobile phones left on the artwork’s surface.

The late night ends with Inger Lund Wold’s ‘Sleep’ (2016, read below) and the aftereffects of Ying’s collision are remembered like a micro-sleep, dream, or virus, emerging and submerging, a potential that is there but not always felt. A few days later I look online for documentation. Artworks by Alex Turgeon, Claude Eigan and Julian-Jakob Kneer are fresh on my mind, but unlike the post-event habits of many things Ying-esque —the release of high res images —theirs is stalled and decelerated, and Late Nite Lullaby remains imprinted on the body, like smoke on a jacket, and the memory of arriving lingers.

She wrote me that after she had woken up she had fallen back asleep. Then she wrote that she had dreamt that everyone around her fell in love with her. She was like a virus moving among human beings.

I answered that I could not remember what I had dreamt.**

Ying Colosseum’s Late Nite Lullaby was on at Blackland on February 7. Volume 4, Spitzweg’s Stay, is on at Berlin’s Simitdchi, March 6, 2016.

Lunch Bytes is launching its first publication, titled No Internet, No Art, at Toronto’s Art Metropole with a conversation between Lunch Bytes curator and founder Melanie Bühler and Director of Creative Development Version House in Berlin, Alex Turgeon, on September 9.

The Toronto launch comes on the heels of the Washington launch on September 2 and the NYC launch on September 3, and will be followed by another one at San Serriffe in Amsterdam on October 1. Edited and introduced by Bühler, published by Onomatopee, and designed by Hannes Gloor, the anthology comes out of the series of public events entitled Lunch Bytes – Thinking about Art and Digital Culture, held in Washington, D.C. 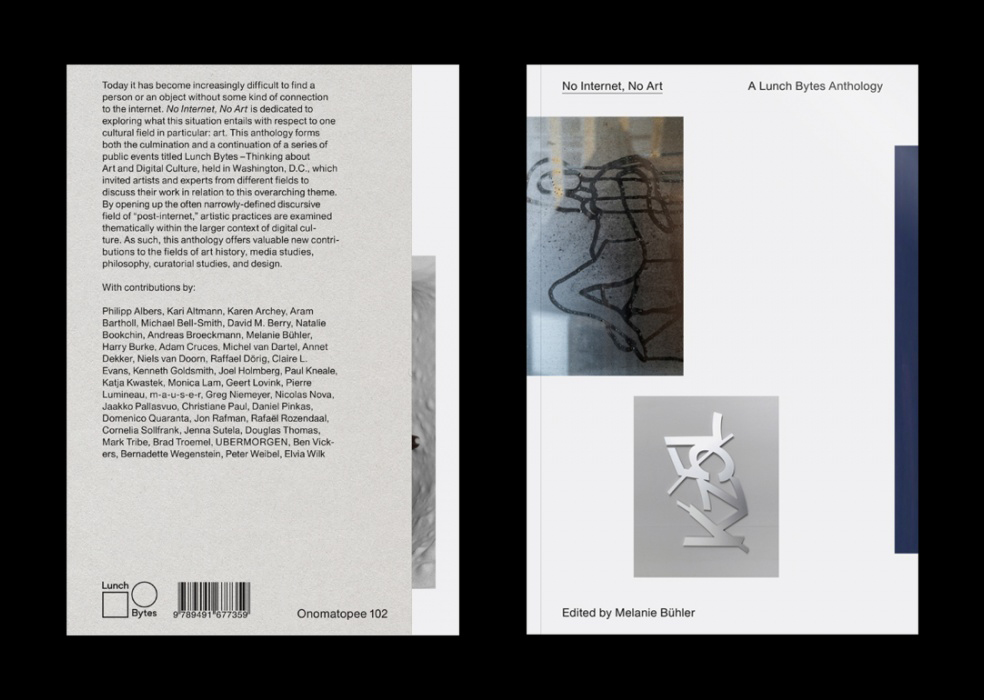