Thinking Through Publishing is an all-day event happening at Central Saint Martins on February 12.

The day is organised by Nicola Guy from Flat Time House, and Ami Clarke director of Banner Repeater and sees three panel discussions throughout the course of the day, all of which address in different ways the relationship between practicing art and publishing.

‘Publishing as, or, with a gallery’ will be chaired by Lizzie Homersham, and ‘Distribution and digital alternatives’ will feature talks by Tom Clark and artist Sara MacKillop. The day ends with a discussion on ‘The lifespan on books’ with Arnaud Desjardin and Karen Di Franco.

Just Frustration, an exhibition presented at Copenhagen’s Sixty Eight between August 7 and August 31 explored frustration both as a feeling and an entanglement. According to the press release, it’s an enmeshment where “futures seem to be permanently seen from the perspective of a past of outwardly and inwardly expressed fear”, where Conservative “common sense” and where the “present is permanent(ly)” made up of the continuation of colonial and imperial historical values. Curated by Tom Clark and Iben Elmstrøm, the group show included work by Ester Fleckner, Rachel Maclean, Imran Perretta, Lousie Haugaard, Amel Ibrahimovic, Hanne Lippard and Chloe Seibert, asks how an artwork can be directed towards this entanglement, this frustration, and find nuances, reliefs, magnifications and common denominators, be it via language, material and/or object.

Ester Fleckner‘s ‘I Navigate in Collisions’ (2015) are two woodcut prints on paper that are nervous images all bearing their forms (or trying to) out of straight lines, like family trees, as Fleckner’s collisions webpage describes. London-based Perretta has created a surface that holds white washed marks up to bare scrutiny and that drapes, quite transparently and brightly, like a thing in the way in the space. It’s just behind Seibert’s video of landscapes, high sky scrapers, mountains, which sits in the window, looking out and titled: ‘I Am At A Loss For Words’ (2013). A small text also by Perretta is powerful and straight forward: “She knows about villages, the Modern and the savage, but I can’t listen anymore, because slowly she is taking my history away from me”.

Danish artist, Louise Haugaard Jørgensen‘s installation, ‘Rendezvous. Ascend to the second floor, melt down to the third floor. Bon appétit’ (2015) includes a white plaster 3D print, which resembles an ancient vessel, perched on a metal structure that could be a drawn symbol of a house. With it she has cut up a lecture by anthropologist, Claude Lévi-Strauss and added it to a tape by Danish Musician, Dario Campeotto. Campeotto’s song is about being in love and never leaving: “you could walk in and out the fire… but you would always be mine” and Levi-Strauss’ lecture is descriptions of methods of how to: cannibalism (boiling, melting etc.) The pairing evokes conversations about consumption but also devotion and enmeshment. “Old Hegemonies”, as the press release discusses, are brought into the foreground and distorted. How can art help itself, us and things around us in the present to remain un-distanced? **

The Just Frustration group exhibition was on at Copenhagen’s Sixty Eight, running from August 7 to 31, 2015.

Header image: Chloe Seibert, ‘I am at a loss for words’ (2013). Installation view. Sixty Eight, Copenhagen.

Experimental writing, it is said by those more comfortably ensconced in the sagging sofa of English literature, is simply a genre: a stereotypical form of book in which certain conventions apply, the same as in any other. As such, it’s over. That fuss and nonsense was all fine in the days of the proper modernists, from James Joyce, up to say, Brigid Brophy or Gilbert Sorrentino, but really, that’s all been mapped out.  It’s done with. Now it’s time to knuckle down and write studied novels with the occasional nod to Derrida if you really must. The relation to tradition is all the better to show that you have mastered it and are beyond it, there’s no need to be disruptive. Writers want that familiar warm novel feeling back, but with a few winks. Or rather, not back so much as to insist on being in a position to perpetuate it, though cleverly, at the same time as insisting, in tune with the times, that there is no alternative.

Danklands would suggest otherwise. Written by Melbourne-based artist Holly Childs it is a book that takes place in the bits of cities that slipped through the master-plan despite being in the middle of it; something that echoes its place in literature. Danklands is written in English, but at all those points where it turns into a thick wet post-natural swamp, in jargon, awkward love, smoggy spaced-outness around the edges of the city’s docklands. Indelicate sentences, packed with clichés and gulped down verbiage that come back wrong, strands of linguistic mouth-backwash float into the reader’s bottle of Fiji water like the delicate tendrils of a jellyfish before dissolving back into narrative, a cluster of lists, bejewelled molten plastic slag and the goings on of several ciphers that pass for characters. In this movement the book occasionally takes time to gather its own co-ordinates, shifting paces, there’s a precision zoned-outness in the finely, almost molecularly, constructed sentences that flow out into the vast intertidal marshes of language with which the internet is silted together with. At other moments, the text floats in dense poetic dazes, tightly worded and loose. 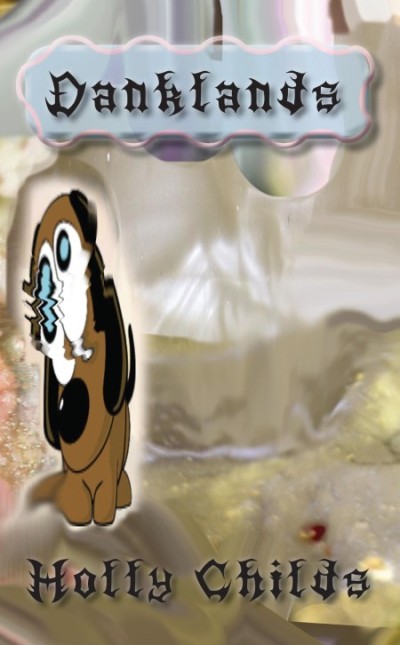 Danklands has the best YouTube make-up tutorial yet to be lightly spritzed on the surface of video. If you follow its steps precisely, it will make your synapses shimmer as much as it extends your lashes. Working out the co-ordinates of the book, in the coagulated oozing mass, of leachate, is part of the fun. Making a list of all the things that aren’t things in the world is amazing enough, making the links between them work as they are brought into conjunction by fire, sunburn, romantic interest, sleepiness, new kinds of plastic and code. Soon enough you’re gliding over the surface of the ice rink, smoothing out the crud from the surface on a giant Zamboni machine that leaves everything crystalised and clear, a glittering swathe of reflection that you can carve a path into, but not before hot water is already poured over it by the machine, Childs’ writing machine, that recomposes the relations between molecules.**