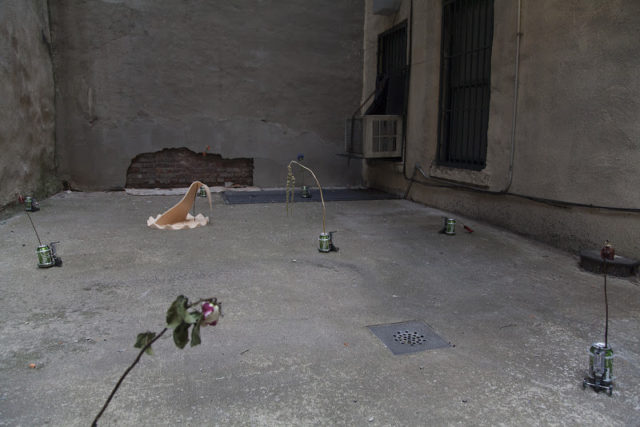 Linda Moncada and Saige Rowe are presenting joint exhibition Is this a love connection at Atlanta’s Species, opening October 1 and running to October 9.

The exhibition press runs as an manifesto-like piece of writing questioning the role of the artist of colour in a white dominated art world context, particularly the collusive nature of market access and discourse, which it posits as inherently provisional for the POC perspective:

“Is being a token thaaaaaaat bad?
Damned if u do, damned if you don’t”

The text introduces the concept of “cultural confusion”, one where cultural exchange simply translates to western aesthetic dominance:

Rowe and Moncada are based in Conyers, Georgia, and Minneapolis, Minnesota, respectively, with the former taking part in the recent Peachtree Industrial exhibition at New York’s Bodega, which aqnb reviewed here.

The distribution of the artist taxon is cosmopolitan or pandemic, meaning they’re found in almost every geographic region, as are the orca, brown rat and pigeon. Despite global ubiquity and a presupposed universal artistic experience, the contours of their respective humanity are molded by municipal markets, governments, climates. Nucleic cities with legacy begin to resemble a Ballardian high-rise; the artist’s isolation and myopia makes geography feel theoretical due to its confines, creating a warped Earth that exists insofar as an individual can directly engage with and sense it. Erin Jane Nelson and Jason Benson of Atlanta-based gallery Species magnify the a-centric, “where life happens slower”, in Peachtree Industrial, a group exhibition running at New York’s Bodega from June 24 to August 7. It creates a cartographical rendering of artists and works encountered in the curators’ former home of Oakland, California, and their new residency in Atlanta, Georgia.

Discovered in Oakland is Josh Minkus, Lily van der Stokker and Chloé Elizabeth Maratta. Minkus’s piece ‘Lipe (tabloid)’ is a series of patents by mechanical engineer Charles E. Lipe from the late 19th century, coinciding with the operation of his eponymous incubator in Syracuse. Beneath the raised patent list is a series of small machine-objects constructed of lead, zinc, wire and plaster, likely deconstructed components of his designs. Illustrations by van der Stokker, namely ‘Artdoctor’ and ‘Soft, Tidy’ are diaphanous, painted and drawn with soft hues. The adjoining texts substantiate a drive towards the sacramental, ritual purification, a sudden launch into the throes of managing psychic trauma: “go into therapy with the Artdoctor to become a healthy artperson”. ‘No Good Only My Good’ by Maratta details a written autoharp tutorial tarnished with sand, pasted over a photo of a microphone and musical equipment. The tutorial applauds experimentation: “[h]ave fun, experiment with the sounds and be sure to share your music with your family and friends!” As sharing makes creative output prone to gazes and critique, the work’s title functions as an aphorism for circumventing an art practice that is subservient to mass approval and markets.

In Atlanta, Nelson and Benson encounter Bessie Harvey, Jiha Moon, Saige Rowe and Jane Fox Hipple. Both ‘Bupe’ and ‘Untilted (Root Face)’ by the late-Harvey use found wood as their foundations, both painted to have eyes and mouth, but not oriented in a way that assumes human, animal or apparition; as a visionary artist, her work was shaped by the Christian God and the natural world, each of her works an act of faith. Similar to Harvey’s sculptures, Moon’s porcelain and earthenware works have referential contours and faces but feel cryptographic or teratological —‘BROD (Blue and Red Onion Doll)’ stands on two non-human legs with two ears resembling the faces of wide-eyed children.

In an exhibition concerning life in the periphery, Rowe’s video ‘three short general movements followed by a lull’ operates well as a bucolic mise en abyme, allowing human body and its surroundings to coalesce and melt into one another, blurring chair into shoe into grass. ‘Thought Pivot (the analyst)’ by Hipple layers the illusory Rubin’s vase over a nearly-symmetrical Rorschachian painting. Her slender rebar and steel sculpture ‘site’ could easily pierce the ground to become a physical marker for psychoanalytic reference.

Peachtree Industrial is not a celebration of decentralizing influence, but a venture outside of the American canon of individualism, facilitating poetic human relations through travel —perhaps existence at the non-center forms social bonds that are not founded in an interest of the self. In tandem the works successfully communicate the Species duo’s admiration for the serendipity of discovery before it was coded, simulated and mired in networks.**

The Peachtree Industrial group exhibition is on at New York’s Bodega, running June 24 to August 7, 2016.