Paul McCarthy’s inflatable butt plug, shunned by Paris, was in its true home rising between the mountains of the bushy Californian backcountry. Like a beacon it drew the art crowd to the Wild West film set town Paramount Ranch. An apt location for the Los Angeles art world to muster, depth of inquiry and the shimmering surface of market and social forces were indistinguishable. Either the set is convincing or there really is a saloon back there.

But who said Los Angeles is trying to become any more contemplative about its art; being the perennially upcoming cultural paradise doesn’t necessitate round-tables and why would you fret when the sun is out and the dogs are cute. That’s the thing about art fairs; the lazy-Susan of works lose their edges as they pass. The only thing for it is to enjoy the scenery (in this instance the Malibu Creek State Park) and hope you recall the gems for later-contemplation.

No one sold much, but there was more cultural capital banked that weekend than can be tallied. As always there was talk of LA not having the collector base to sustain a serious art community. Try telling that to the creative centers that share the Pacific rim with LA; Auckland, Osaka, Jogjakarta, Mexico City, Vancouver. Like social stratification generally, so too the art world exists at a local level and at an international circulatory height and they pay little head to each other.

Organization of a fair usually falls to teams of administrative ponies whereas the Paramount Ranch family does it with (seemingly) casual flick of the teledex. This is the third year artists Liz Craft and Pentti Monkkonen (of Paradise Garage), and gallerists Robbie Fitzpatrick and Alex Freedman (of Freedman Fitzpatrick) have mounted the project and it’s clearly much appreciated by the percolating visitors and bubbling gallerists alike.

A highlight was CLAYnation hosted by LA artist Richard Hawkins, where Kelly Akashi, Kate Costello, Alex Hubbard, Liz Larner and Nicolas Tremblay modeled clay sculptures live on the barnyard equivalent of a stage. According to Akashi the art crowd is very keen on critical interrogation during the creative process, which may go some way to explaining her eventual creation of a medusa head.

Similarly with a certain ferocity Claire Barrow and Reba Maybury gave us Fishwives at Shoot the Lobster’s stables-come-catwalk. Their punkish clothes strung up on chains brought a decidedly un-pastoral feel to the fair. If the Wild West is haunted by ghosts of misogynist cowboys, Barrow and Maybury were the witches in the back shed brewing up wearable relief. If they can bottle an antidote to “a complacent self-assurance reveling in nostalgia”, as was scrawled on one of their pieces, it should be distributed to gallerists globally.

Nearby, also in the safe space of a side stable, Eckhaus Latta, angels of the art fashion fusion, hosted a store with Waggy Tee by Nora Slade and featured their recent collaborative shirt on which Slade impersonates Sturtevant impersonating Beuys.

Berlin’s The Duck was by far the most bucolic ‘booth’. Installed on and below a tree were sculptures and a video screen by Houston born Eric Sidner. His hypnotic polystyrene and resin eye perched below swaying branches gave the scene an occult twist (aided by the cinematic and historical lives of drooping trees on American screen). American screen history of a different kind also invited the fantastical at Real Fine Arts where Maggie Lee’s 2015 film ‘Mommy’ came with bejeweled headphones jangling in the periphery.

Naoki Sutter-Shudo and Sabrina Tarasoff (who were previously part of the Shanaynay, Paris, team) gave a pleasing insight into things to come at their currently itinerant project Bel Ami. Also soon-to-be a US import, Melbourne’s Centre For Style showed the haptic collages of Chloe Elizabeth Maratta. Boob-job stitches and scratchy jewelry featured both as scars and as shields, physical and psychological.

Del Vaz projects pulled up in a black hummer and offered a place to lounge on carpet works by Sophie Stone (previously installed in the Santa Monica apartment gallery with great success) while you waited for a haircut by Lydia Hwang in the side mirror of the car.

The narrow set of Brussels’ dépendance was subtle, a handful of drawings and paintings, but very strong — an opinion apparently shared by the crowd urgently peering at a Peter Watchler drawing of a hobo hunched below the peering stony sculpture face of the pediment, a thematically appropriate Thomas Baryle cowboy portrait, and an atmospherically appropriate nonchalant Krebber watercolor. In the end ancient mountains always win out though and so it was at Paramount Ranch; the view was the best view of the day.**

Paramount Ranch III was on in Agoura Hills California, running January 30 to 31, 2016.

Real Fine Arts will be welcoming artist Dave Miko back for his second exhibition at the Brooklyn space, titled The Hangover and running from September 13 to October 26.

The American-born painter has been featured in exhibitions ever since he graduated with an MFA from Yale, most recently in March’s An Exhibition of Painting Obscured by an Evening of Performance at the same gallery, July’s group exhibition at NYC’s Martos titled Every day in every way I’m freely opening my senses to the beauty in myself and opening up to all the beauty around me and in all the people I will encounter, and August’s group show with Ned Vena and Antek Walczak at NYC’s Algus Greenspon.

Miko’s paintings are often perplexing, giving both rise and expression to some sort of generalised and flattened modern anxiety. Shapes and letters come out of left field, compositions teeter on uneven grounds, punctuated by fragments of poetry and straddling some ephemeral place between the painful consciousness of being alive and the dreamlike absurdity of it all.

There is currently no exhibition page for this show. ** 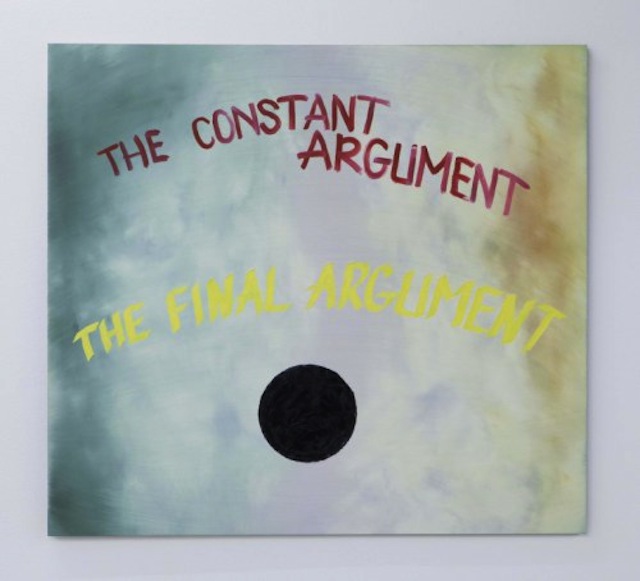