Psychic TV will live score Derek Jarman‘s In the Shadow of the Sun at Los Angeles’ The Regent Theater on August 10.

Jarman’s 1981 film —a multi-textural mix of Super 8 films shot between 1972 and 1975— is a poetic sequence of its creator’s go-to leitmotifs of mirrors, fires, and dancing bodies in motion, doubly-exposed and primarily tinted with psychedelic light leaks.

Co-presented by Berserktown, a music festival in its third edition, Psychic TV will reimagine the original score of the film, which was provided, at the time, by industrial noise pioneers Throbbing Gristle. Both Throbbing Gristle and Psychic TV’s founding member Genesis Breyer P-Orridge, and frequent Jarman collaborator will lead the live musical reinterpretation. The event occurs in anticipation of Psychic TV’s September 2016 release of their new album Alientist.

Psychic TV are also performing at Berserktown at the Teragram Ballroom in Los Angeles from August 12 to 14. They will be performing their debut LP Force the Hand of Chance, along with a line-up that includes a long list of other artists such as Inga Copeland, Odwalla88, Angels in America, and more. 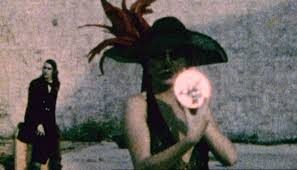 An evening of live performance and music called Some Ware is on at Los Angeles’ Human Resources,  on August 1.

Performers include No Vacancy Inn, A$AP Bari, Some Ware DJ, and DJ Cuntry Noise. The event comes following the close of the Apeirophobia / Aporia group exhibition running in the space July 1 to 31.

The event is hosted by LA-based member of  Odwalla88, Pinky Rose (aka Flannery Silva), who also took part in the recent Wrath Pin Face Binned exhibition in San Francisco in June.

Pinky Rose, ‘why should I love you’ (2016). Courtesy the artist and Sex Magazine, New York.
share news item