The District 17 group exhibition is on at Berlin’s Kraupa-Tuskany Zeidler, opening January 20 and running to February 23.

Curated by Gabriela Acha, Sarah Johanna Theurer and Catherine Wang, the show includes work by Jesse Darling, Mia Goyette, Lito Kattou, Shaun Motsi, Johannes Paul Raether, Jenna Sutela and Bruno Zhu. The works create a dialogue in which a “scenario of encounters for collective bodies [are] yet to be shaped.”

The Пикник на обочине (Piknik na obochine) group show is on at Paris’ Exo, opening May 12 through May 19.

The exhibition —the title of which translates to ‘Roadside Picnic’ in English —includes work by the likes of Viktor Timofeev, Jason Benson, Martin Kohout, and Hannah Lees, each of whom have contributed a lot to the art world’s conversation on human self-comprehension and the related speculation around the existence of the ‘natural’ world during “The Time of The Anthropocene”, to quote philosopher Bruno Latour, who’s words are echoed in the press release.

The show borrows its title from 1970s Russian science fiction novel of the same name about an extraterrestrial occurrence called ‘The Visitation’, that happened for two days across six sites simultaneously, unbeknownst to the local people. The book compares the event to a picnic, while the exhibition’s press release also includes a paragraph from Annihilation (2014) by Jeff Vandermeer that describes a picture of the discovery of left-over rusted equipment and tents that were “little more than husks” in an aftermath of an expedition made by humans gone long before.

New Theatre brings another round of performances with Spills, written by Yael Salomonowitz and running at the Berlin space on December 4, 5 and 7.

Spills comes on the footsteps of the Spills (Prologue) – which ran for one night in September, bracketed by the sold-out The End of Love performance in August and the three-night-only DD Mood at the end of October – and brings together a handful of artists, including Juliette Blightman, Alexander Coggin, Mia Goyette, Heatsick, Flora Klein, Billy Rennekamp and Tobias Spichtig.

In lieu of a performance description, Spills only provides a German text that translates, roughly, to:

The feeling is weightless on days when the city seems small and we appear large in it. The observation conducted confirms the assessment is correct, but the profound lack of understanding seldom differs – one is tempted to give examples, without meaning to. We leave it.

See the Spills FB page for details or click here to buy tickets. ** 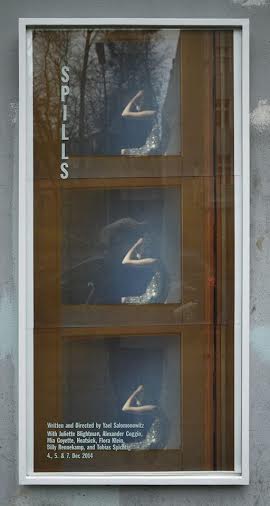 Attendance at Berlin’s New Theater events always seems to exceed capacity. A one night only performance of The End of Love, written and directed by venue founders Calla Henkel and Max Pitegoff, takes this trend to extremes. Some of those attending tonight fill the seating area like a liquid. The rest are squeezed out and pushed into the bar or spill out onto the rainy street. Once the curtains open, oblivious chit-chat from outside contributes to the foley sound and these often filmic interjections occur as if they’d been scripted. A North American whine sounds louder than anything on stage saying, “I’m leaving tomorrow.” The audience titters. Someone answers, “perfect.”

The play begins with our leads; bratty expat siblings, ‘Scott’ (Skye Chamberlain) and ‘Lucy’ (Leila Hekmat) who find out that their parents have died and they’re now the heirs to the Parisian bookstore where the play is set. An artistic collaboration, the setting is an ensemble of art pieces and their artist creators. Six posters by Lucy Stahl hang stage-left to advertise the readings to come. A framed poster by Stephen G. Rhodes to the right reads “learn to read god damn it”. The painted backdrop of dusty bookshelves, a spiral staircase by Chamberlain and Patrick Armstrong sets the scene; prop elements, a book and pencil from Sara MacKillop laying on Lucy’s desk add complexity to detail.

Many of those who created the pieces for the set return to the stage as a cast of functional clichés: David Lieske as ‘Tall Jerry’ , Mia Goyette as ‘Browser’, Mia Von Matt and Florian Ludwig with their own first names. Each delivers a line or two before taking their place, perched on Scott’s ladder, curled around Lucy’s feet. All of them remain as further amendments to the ever-changing stage set installation.

The script itself is sparse. Most of the dialogue is one-sided correspondence, like Scott’s letter to his deceased mother, and Lucy’s emails to a Florian who “never writes back.” Melodramatic monologues, “some day I’ll explain to you the way, the way you left me, like some royal child lost to the revolution”, offers a profound-sounding nonsense and sits adjacent to six artist readings, for which the play is an elaborate vehicle. Taking her place in a rocking chair built by Florian Auer out front, Hanne Lippard is the first to read. Her spoken astrological predictions, a successful performative gesture, strike a balance between content and delivery enabling her to top Scott, Lucy and the audience. The latter yawns, aweless, while handing out baguettes and saying, “this bookstore is boring.” Scott barrels ahead on his trajectory of progress and improvement: “I replaced your coffee maker with a strobe light.”

Pippin Wigglesworth‘s reading, which comes out like a barrage of rhetoric spat directly onto the stage, sounds like a retort. Even so, Scott and Lucy’s performance of indifference is already reflecting into the audience, which is too large, too loud and too unruly for the tiny theatre with its even tinier PA. Between readings, ‘Flower Boy’ Georgia Gray parades increasingly embellished flower ornaments of her own creation onto the set. Reciting French as if she were reading it from a cheese packet, her offerings are hung on a ladder, dropped under a table, with elaborate nonchalance. It’s all part of a seemingly deliberate stylistic irreverence.

The phony French accent of Jack Gross’ ‘Pierre’, our bookish Parisian who is ordered by Scott to “stop browsing” in order to look for a screw, falters when he answers Pablo Larios‘ reading of a melancholy love story set on the Rhine asking, “is this an autobiography?” It’s a question put to the entire performance. Set in Paris rather than Berlin, it’s one of imperialist ex-patriotism that pokes at the German city’s exile art scene from a safe distance, yet the comparisons are unmissable. Pierre’s accent and appreciation for literature, marking him as foreign even as he plays a native Parisian, is a bite on most every expat scene in Berlin, where being a ‘true Berliner’ has become an exotic subjectivity.

By the time Maxwell Simmer arrives on stage to read, form has succeeded in dominating content. Edging towards parody, off-stage expressions of dramatic restlessness become more frequent and increasingly difficult to ignore. The audience’s refusal to quit performing seems to be met with a certain unwillingness by the readers to perform in kind. Lucy noisily rips pages from a book, Scott tyrannically fusses over a mirror ball. Bottles and glasses smash in domino-effect from the audience.

Reading the last piece from the very back of the stage is Goyette. Before her words reach the second row they’ve been swallowed by the milieu. Whether by design or fault or contingent inevitability, the mise en scène of New Theater is so convincing that anything occurring in its vicinity – unscripted interjections and accidents of smashing glass, a flower sculpture dropped under a chair – is easily absorbed into the drama of its collaborative performance. In another context, every detail could succeed as a stand-alone piece, in this space they acquiesce to the collaboration, forming a persuasively layered ambience; the audience included. At New Theater, just by being there you get the feeling that you are taking part in something, something that is happening. **

The End of Love performance was held at Berlin’s New Theater on August 19, 2014.

Featuring work by Naja Ankarfeldt, Alex Dolan, Olivia Erlanger, Mia Goyette, Martin Kohout, Hanne Lippard, Aude Pariset, Anna Sagström and Anne de Vries, a blurb littered with references to Screen Ops Tactical Gloves and their multi-role functioning both out in the field and on the touchscreen, the possibilities are looking promising:

“When the panel is touched, the wave is absorbed.
Vibrations and frequencies on a x/y axis.

To handle in order to manipulate, alter, or otherwise affect, in an adverse way. Glide your fingertips on top of the plane, and press gently the palm of your hand against the surface. Flat, curved, be tangent to (a surface) at a certain point.

Layer fabrics to improve their handle, appearance and performance. Stitch or laminate an interfacing fabric. Insulated by capturing air in space.

Thermochromic being. Sensitive to the sun.

Direct touch can be bypassed by using a different technique – rather than pressing with the soft skin of an outstretched fingertips, the finger is curled over, so that the tip of a fingernail can be used instead.