Zach Blas is presenting a lecture Conditions are Now in Transition: the Local, The Border at London’s Goldsmiths on November 23.

As an artist engaging with technology, queerness, and politics, Blas’ talk will focus on his recent work and writing around the limitations of digital calculation and visualisation of biometric recognition.

Eduoard Gilssant’s writing on opacity and his critique of transparency will present as a major reference point in the artist’s work towards a theory of ‘informatic opacity’, along with his own dystopian installations ‘Face Cages’ and his ‘Facial Weaponisation Suite’ project in thinking of art in technology.

‘The Standard Model’, a publication project by the MFA Curating students of Goldsmiths, holds its fundraiser tonight at The Chapel Bar in London, starting at 8pm.

The publication, created as the final iteration of the Masters programme, is a collaborative book operating as a platform for new voices in the field of curation, with everything from formal essays to experimental creative writing and recorded conversations between curators and artists contributing to modern discussions on the strategies, methods, and  challenges of contemporary curation.

Tonight’s event, which costs £7,50 and comes with two free drinks, music by Europa Mondial (Jack and Joel), as well as Anne de Boer and Cory Scozzari, and live visuals from Derzu Campos and Barbara Gamper, comes in addition to the Kickstarter created for the production and publication of the book.

Goldsmiths University is putting on the Creative Machine group show this month, taking place at the university’s gallery and running from November 6 to November 14.

The group show, which brings 22 different artists and art collectives for a major exhibition exploring “the twilight world of human/machine creativity” and comprised of a multitude of media, including video and computer art, installations, AI and robotics, as well as apps created by leading artists form the university and international artists invited to participate.

Preceding the exhibition’s opening night, which begins at 6pm, Goldsmiths University is also hosting The Human Interactive Conference, running throughout the day on November 6 and featuring a host of academic speakers and industry leaders discussing computer games, robotics, neuroscience, bioinformatics and computer art, among other topics. 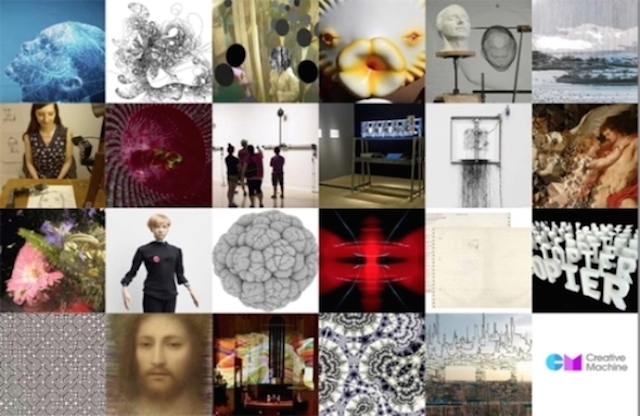 London’s Goldsmiths College is celebrating its 2014 Master of Fine Art (MFA) showcase, which will run at their campus grounds from July 10 to July 14.

The eclectic programme will feature the works of over 50 Fine Art graduates at the culmination of their two-year studies, including Gro Sarauw, Daniel Oxholm Sørensen, Rebeen Hamarafiq, and Ting-Ting Cheng.

Also included in the programme are a few art writers participating in the MFA, including Judith Browning and Daphne de Sonneville.

Interrogating divergent perspectives on the field of Visual Cultures, the series of short, co-authored paperbacks each interrogate a topic, in two essays, in one book. The first three titles feature Visual Cultures as …Seriousness, …Recollection and, most interestingly, …Objects and Affects. They’ll be supplemented on the night by a panel discussion featuring their respective authors –including Gavin Butt, Jorella Andrews, Lynn Turner, Astrid Schmetterling, Simon O’Sullivan and Irit Rogoff –as well as music by Otolith Group members Mark Fisher and Kodwo Eshun.

Read an aqnb comment on ‘The object in ‘Net Art‘ and see the Goldsmiths website for details. **

Problem-solving is at the core of design and for Goldsmiths MA Design show Tilt at Hoxton Gallery at the Arch, running September 19 to 22, some of those problems include London food waste, the perpetual pursuit of more space and future landfill. Hence the fox diners, Japanese modular shelving and a design disposal manifesto being just some of the conundrums showing during London Design Festival.

Covering industrial, communication and spatial design, 40 projects from graduates who’ve already shown at Milan Salone, 100% Design and been recognised at the A’Design Awards, there’s little doubt of the world-class ideas generation no doubt on display.