A couple of years ago Msoft came up with their very own vision of the future of productivity. An amazing video about the technologies they imagined in 2019, a video which obtained hundreds of thousands of hits (probably millions) but they pulled it from youtube short time after.

Now they’ve got a new vision of the future they’ve decided to upload it again, giving continuity to the lives of Ayla, Quin and Shannon (she’ll probably become a rebel adolescent in the next video if they keep the series going).

Kurt DelBene, president of the Office division describes the video as ideas  “based on real technology” and notice how they emphasize something barely exploited in their previous clip… voice commands (with all the Siri hype and now that we’re moving into a voice dictated society).

This time they’re not giving us a date (short after we imagine) but a few other sets & situations. From a school, a plane or a roof garden to a kitchen, a hotel or a futuristic General Motors car (which shares the road with Smarts & all!). A few errors as usual here and there but their virtual clean hyperproductive society is the kind of corporate image and communication we expect from a technological company, and not those cheesy surreal ads from the Win7party campaign. Vimeo is quite hyperactive lately huh? They just keep pulling contests out of their hat like there was no tomorrow…. their very own Festival, then “One day on earth” project, lately they partnered with Nokia for a shorts festival, and yesterday they announced a new contest….

This time Saatchi & Saatchi (the big bold advertising emporium with quite a passion for contemporary art) & Moby (the other big bold American DJ who hasn’t done anything worth mentioning since Play… and that was a while ago) are teaming up with Vimeo for some “new talent” discovery.

The initiative is part of Saatchi & Saatchi New Directors’ Showcase (already the 21st edition) at the Cannes Lions fest which takes “Hello, Future.” as this year’s theme. 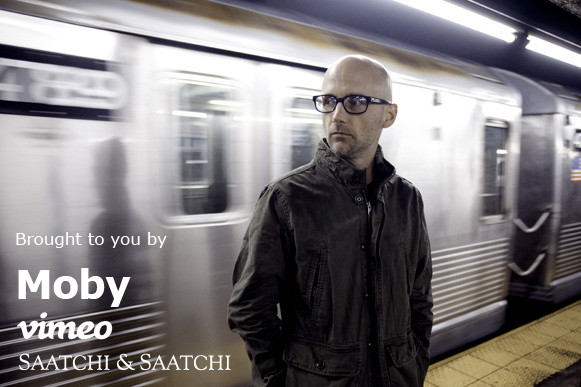 Basically like many artists have been doing lately (getting someone to work for free) and like many other initiatives like the one by Genero.tv, Moby, Vimeo & Mr Saatchi would love you to “Visualise the concept of ‘Hello, Future’ in the form of a standout music video inspired by one of three tracks selected from Moby’s new album, “Destroyed”.

What do you get in exchange?

A lot of recognition! Ain’t that enough? Mmmm, ok, they’ll show your film during their Cannes Showcase on June 23rd + the chance to work on a project for Mr Saatchi’s ad network!

Submission deadline: 9th of May, very tight yep, but we know many of you will participate anyway. More details on the contest page. Hey look! A week has passed by… and 3 videos have already been submitted!!! Cmon, don’t be stingy!

This year’s competition will be judged by Curators from BUG Music Videos, and key representatives of Vimeo, Saatchi & Saatchi Worldwide Creative Board, and Moby (the best thing about all this is that Saatchi’s  New Directors Showcase have a youtube channel account and not a Vimeo one… ooohps!).