Barely a month and a half for this second edition of the American creative video platform awards to take place… and barely6 days left before the voting period is over. It started a week ago… but we thought a little reminder would be most welcome.

As you probably know this year’s event will run from June 7th-9th at  Vimeo’s headquarters underneath the High Line on New York’s West Side, but right before they take place it’s always a treat to discover this year’s finalists. Our votes may, or may not influence the final result as we don’t know to how they “will be mixed with the judges decisions”, all we know is that you can vote once a day each category (as a registered user of course), but other than that….

Still, it’s always worth spending 5min or 2 hours of your time to discover the best of those 13 categories that opt to a $25K grand prize and many many little $5K mini-prizes, well, $5000 isn’t that bad for a category prize right?

They’re all available this way, and yes, even if you can only vote once a day… you can stream them unlimited times! 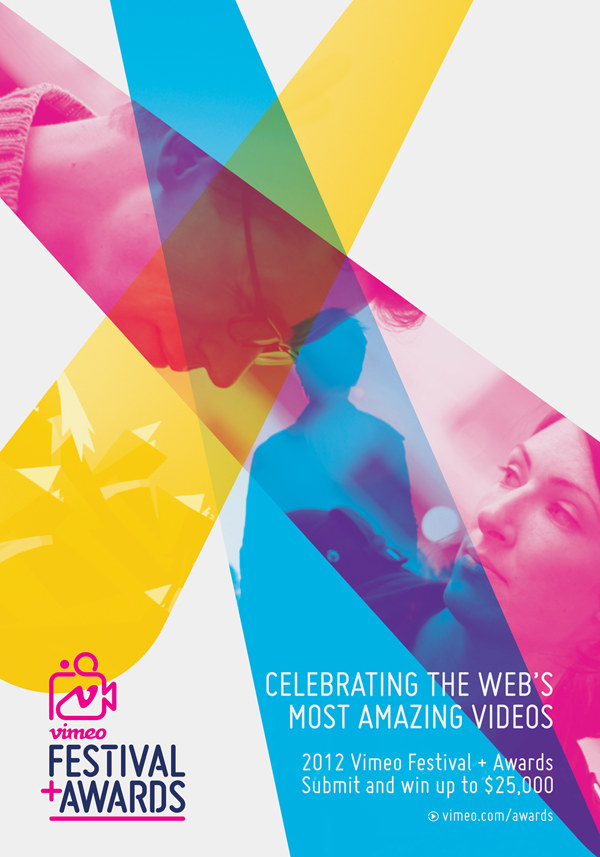 A much needed revamp for the arty video community which hadn’t changed their visual appeal in ages (pretty much since it appeared back in 2004). And taking into account the explosion of “creative networks” elsewhere on the net, and the constant evolution of the utubes & dailymotions, well, it’s more than welcome.

Vimeo promises a “harder, faster, better stronger” place, or something similar. The new design is sort of a beta version as some functionalities may not work 500% bugless, but it should bring a more cinematic experience (vimeo is, after all, still the best place to enjoy quality clips, shorts & animation… for free, if not we would be talking about Mubi of corz), better browsing (with an auto-hiding top bar) and a better integration of the whole “social” concept this community is about.

Things we like: the new search with better filtering options, oh god, why didn’t they implement this before? Like searching for Creative Commons videos (just like Flickr does), amazing when looking for material to add to your posts and works.

Or the much much much mUCH needed integration with other social tools like facebook & twitter not only for contact integration but with sharing purposes, although… the fb, twitter or g+ buttons aren’t present on the video pages themselves… which is still an obstacle when having to share something you like real quick (more than 2 clicks and a page load in the middle? bah!).

What remains unchanged is the classic snappy and wonderfully elegant player, hopefully it will never change 😉

When looking for a track for your short movie or final graduation piece you have a few options…. ask that amazing sound engineer friend of yours (or that other synth-vegas expert cousin) for a little dark but enlightening piece. Use some famous MGMT track, give all credit to them. Create your own soundtrack… because you also happen to be a music genius… or use a specialized royalty free music website such as MusicLoops or Jamendo (and pay or not to use them).

And because there’s probably some tasty cake in this market the pipol @ Vimeo (who are starting to come up with many many many ways to monetize their ever-growing community) decided to launch their own “Music Store”.

Uhmmmmmmmm, probably because they know big part of their userbase are artists (who tend to struggle finding the appropriate tracks for their pieces) they just released this new thing. They promise a library of 45K+ tracks to choose from (@ variable MP3 bitrates 192 – 320kb) and for $2 each if not free.

The whole platform is powered apparently by Audiosocket who are specialized in providing this kind of music-store platforms.

Now the only thing left for Vimeo to close the perfect circle is to release a powerful on-line video editing tool… but I’m quite convinced that’s on their roadmap. Uhhhhh what’s this! YACHT’s don’t find the darkness instrumental for free!

It was about time that such a creative community like Vimeo had its own awards, here’s where most indie movies (animation, experimental, music vids….) have an on-line copy or a début and most animators, ad agencies & trendy directors have a page or a channel…

It was about time the most alternative video platform on the web started showing the creative power its users have… and there is no better way than rewarding these with some kind of recognition. Hopefully the Vimeo awards will become a referent in the industry and help all those unknown artist gain some recognition…

“The Vimeo Festival and Awards will be a celebration of the best original and creative video that has premiered online. Our goal is to reward the individual creators behind online video and acknowledge the internet as a quality medium of expression and distribution. And of course, we’re going to do it in style”.

A few artists like Chris Crutchfield, Malcom Sutherland or Nick Campbell have already produced some animated titles to promote the website which made them popular …

The details were just unveiled a few days ago and you can now submit your work until July 31st; which will cost you around 20$ or 5$ if you have a Vimeo pro account (alternatively you can nominate any video from ANY website, which is painless & free!!).

The main condition is that your video must have premiered on-line between June 2008 and July 2010 (rest here).

There are 9 main categories: Narrative, Remix, Original Series, Documentary, Music Video, Animation, Motion Graphics, Experimental and obviously a Grand Prize for the very best video (which will be granted with $25.000 to produce a new work).

The awards will be given at a ceremony as part of the Vimeo Festival during October 8th & 9th held @ the IAC Headquarters and the School of Vistual Arts in New York . And who’s to decide who wins?

Well some renown names of the independent & alternative video community have been selected for this occasion. The known judges so far go from the eclectic David Lynch (judge for Experimental), to Morgan Spurlock ( the one behind “Super Size Me”, therefore judge for Documentary). They’ll be selecting the best of the best in between August & early October after the submitting period ends.

But Vimeo thinks that a competition like this should be more than just submitting & earning cash prizes. That’s why during those 2 days several activities like screenings, conferences & workshops will take place. More info will be coming shortly. Stay tuned!!