The first episode, called ‘Internationalization and standardization’ mix + covering the author’s sonic experiences of Poland and Romania, aired on NTS Radio on May 3. This following one covers pop musical hegemony in the UAE, Oman and Jordan, and will continue to surface across a dispersed network of international radio stations until the end of the year. The series is a mix of dazed and visceral soundscapes, produced by Kimmo Modig, interspersed with a live audio reading by Kretowicz from her recent novel, Somewhere I’ve Never Been co-published by Berlin’s TLTRPreß and London’s Pool.

The book explores what the blurb calls “loss and being alone in a self-started journey through the US, Europe and the Middle East.”**

Bonaventure (aka Soraya Lutangu) has been accruing a rather impressive list of credits to her name since joining Berlin Community Radio‘s BCR Incubator programme around this time last year. The recently Berlin- now Lisbon-based producer premieres a new music video with AQNB today — ruptured heat and a pixel blaze to match the fierce resistance of ‘COMPLEXION.’


Tense with violent sensuality, the track was first released as a single via NON Worldwide on October 17, 2016. Her FREE LUTANGU EP followed on PTP Recordings, along with remixes of ‘COMPLEXION’ by the likes of ENDGAME, Ziúr, Y1640 and others, as well as a song featuring frequent collaborator and artist in her own right, Hannah Black. Now here we have the first video, directed by Ali-Eddine Abdelkhalek, images by Charlotte Krieger and featuring Lutangu’s sister Célia.

Watch the video above and read a recent AQNB interview with Bonaventure here.**

Bonaventure’s FREE LUTANGU EP was released via PTP Recordings on May 12, 2017.

The fifth Berlin Art Week is taking over the German city this week, running from September 13 to 18 at various locations throughout Berlin.

Over 20 institutional exhibitions, project spaces and private collections will take place alongside various line-ups of screenings, talks and performances as well as art awards.

— A new production by Anne Imhof Angst II: Eröffnung der Ausstellung-als-Oper / Opening of the exhibition-as-opera at the historic hall of Hamburger Banhof.

— A curated selection of work from UdK students at at Galerie Burster.

— Brussel-based collective HC will perform Incident, an intervention for one evening at KUNSTSAELE Berlin.

— Marianne Vlaschits’s *a disturbance travelling through a medium* at DUVE Berlin.

— Jo-ey Tang’s Like An Intruder, The Speaker Removes His Cap, Walking In The Air With His Hands To The Ground at Porcina, Chert, Berlin.

Berlin Community Radio (BCR) will be hosting its three-year birthday for Club of the Month at Berlin’s KitKat Club on September 14.

BCR has hosted over 100 shows, bringing together an evolving community of people from artists, musicians and writers that work across a variety of media.

Berlin Community Radio announces a call for artists for its new BCR Incubator programme, open to applications until April 25.

Aiming to “support Berlin-based emerging electronic music talents with a special focus on underrepresentedd and marginalised voices”, the programme will include a month-long BCR radio residency, music release, live performance, and Ableton Live 9 license and training, as well as studio time and an PR support.

The jury will include BCR-founders Anastazja Moser and Sarah Miles, as well as Tabitha Thorlu-Bangura of London’s NTS Radio, Soraya Bouwier of Truants blog, Frankie Hutchinson of Discwoman, and producer and BCR presenter rRoxymore.

See the BCR website to apply and for more details.**

“I really expected it to kind of drown itself in a while”, says artist Claire Tolan about her ongoing research, interest and interaction with the YouTube-born practice and neologism ASMR (Autonomous Sensory Meridian Response).

In the second of two videos exploring the Berlin-based artist’s work –as part of our ongoing video series made in collaboration with Video in Common –aqnb joins Tolan in talking about developing her work, from mixing ASMR sounds live on air for a regular show at Berlin Community Radio called ‘You’re Worth It’ to applying a growing archive to her ringtone database Shush Systems and live ASMR Karaoke events.

Spending three-months in London last year on the Perlin Noise Residency, Tolan not only developed Shush Systems but teamed up with fellow SPACE residency artist Kei Kreutler to develop Second Foundation – a reading group and events series that explores practices of cybernetic pedagogy. It’s loosely based on a shared interest in veteran media artist Roy Ascott’s Groundcourse programme and precipitated in two major live performances –one by Tolan supporting Holly Herndon at Oval Space and another with Kreutler launching Second Foundation at Goethe-Institut.

The latter Tolan describes as a sort of “social evening” or “ice breaker” in a physical space that models itself on interactions on the internet. It explores how strangers come together and communities are formed alongside new technologies: “it’s powerful to think about how we can use the potential of different kinds of communication”.**

Watch the video embedded above and see here for Part One.

Produced in partnership with Video in Common. This project has been made possible through the generous support of Arts Council England.

The fourth Berlin Art Week is taking over the German city this week, running from September 15 to September 20 at various locations throughout Berlin.

Like every year, the city explodes with art, with the abc art berlin contemporary and Positions Berlin art fairs both opening on Thursday, as well as over 20 institutional exhibitions, project spaces and private collections, and a stacked lineup of ceremonies, gallery nights, performances, talks and screenings.

The opening night brings the three different exhibitions with Redemption Jokes at nGbK, Ich kenne kein Weekend. The Archive and Collection of René Block at n.b.k., and the reception for Paul McCarthy‘s latest exhibition at Schinkel Pavillon. Other highlights include:

— Aaron Graham and Bryan Morello with Send Cycle at Neumeister Bar-Am, with an installation by Cécile B. Evans and Yuri Pattison.

— Matt Goerzen with Low Floor, No Ceiling at Future Gallery

— Slavs and Tatars with Dschinn and Dschuice at Kraupa-Tuskany Zeidler

— Hito Steyerl with her first solo exhibition at KOW 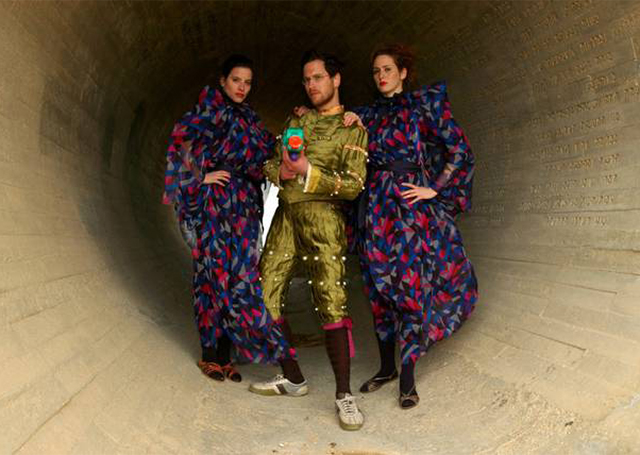 Galerie Wedding will be the venue of artist Ilja Karilampi‘s solo exhibition, titled HAUPTSTADTREVIER and running from April 16 to May 30.

HAUPTSTADTREVIER comes as the second exhibition by POW (Post-Otherness-Wedding), curated by Solvej Helweg Ovesen and Bonaventure Soh Bejeng Ndikung, and plays on Berlin’s long-standing history of branding itself. In the wide facade Windows of Berlin’s Galerie Wedding, Karilampi sets up a personal collection of symbols and brands that he has collected in Berlin, creating a kind of presentation of the city’s visual markers.

Exploring tag-detection, Karilampi examines how these symbols, which create a language that is always on the brink of erasure, tell the story of the city and also a story outside of it, as symbols do to preset minds. The exhibition opening on April 16 will be accompanied by a DJ set from Anastasia Filipovna, co-founder of Berlin Community Radio.

Our favourite community radio station, Berlin Community Radio, is approaching the tail end of a crowdfunding competition that could secure their existence for the next year.

BCR’s Anastasia Filipovna and Sarah Miles, have been steadily gaining the lead in the 12-day crowdfunding marathon. And it’s good thing because the money could keep them going for another year, which is no easy feat in the world of community arts programming.

With no corporate sponsorship keeping them flush, the win could–will–be a big one, and the radio station is now in the lead. Help keep it there so you can keep hearing shows by Heatsick and Downtown Ilja. Just follow this link and click on the heart beside Berlin Community Radio to –no annoying registration required. 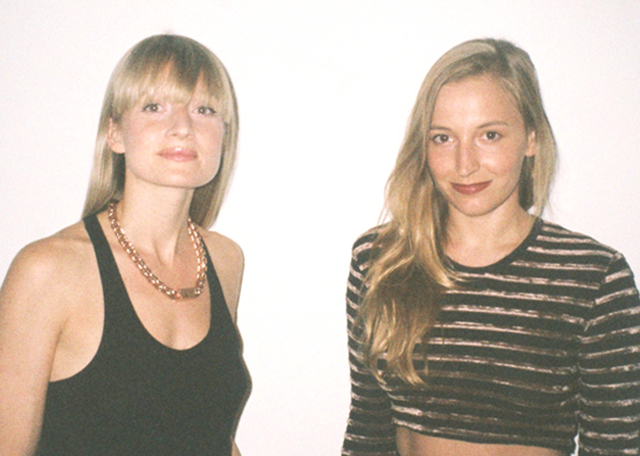 Kicking off at 2pm, FEMEA begins with an exhibition opening of the students’ work, followed by a workshop titled ‘Pompoir – pump up your va g g!’ with Monai­ de Paula, and a series of project presentations by student artists, including ‘Mirror Discourse’ with Eleanor Aylett-Jones, ‘Nip Slip’ with Claire van der Mee and ‘The First Woman’ with Daniela Zorrozua.

At 5:30pm, the Berlin-based feminist collective, Fem Coven, takes the stage. It opens with writer and curator Göksu Kunak‘s presentation of her paper, ‘From Madonna to Transformella: The Burden of (re)Production’, and artist Nine Yamamoto-Masson‘s talk about ‘New Canons – Rallying Against the Erasure of Wartime Sexual Violence in the “Comfort Women” Issue in Asia’. This is followed by an introduction to collective and its Berlin Community Radio show, HYSTEREO, and a talk with aqnb‘s Eva Folks (Evanna Folkenfolk) on ‘The Invisible Woman: Female Sexuality in History’ and Nicole Leaver on ‘The Left Side of Feminism: Marxism and Socialism in Feminist Theory’.

The festival wraps up with a concert by Ellen Arkbro, a lecture performance by Mysti titled ‘You, My Communion Wafer, a ‘QUEEZ – FEMEA’ Pub Quiz, and, of course, some good tunes.

Berlin Community Radio is celebrating its first year out of the gates with a big warehouse birthday bash, taking place at Alt Stralau 4 on September 20.

The radio station, founded by Sarah Miles and Anastasia Filipovna and picking up major steam in its short time on the air, is celebrating the one-year mark with 14 DJs spread over two floors and a massive sound system, as well as a host of special guests throughout the night. Hear Ilja Karilampi spin some tunes, listen to a DJ set by Heatsick and a live one by Dan Bodan, or stay till the early hours to hear M.E.S.H. close out the night.

The EDENunlimited/tbc.tbc group show is gathering up a selection of local and international not-for-profit spaces and artists for a sound-and-word exhibition taking place at one of Berlin’s run-down old buildings at Alt Stralau 4 from September 20 – 28.

The art spaces featured in the exhibition – including V4ULT, Parallel Oaxaca, M/L Artspace, Almanac and Center (with artist project coeval.gen.in) – were selected following a secret but random set of criteria, and asked to provide a sound work accompanied by a visual element done by an artist of their choice.

The 19 contributing artists, in turn, have never physically met, instead using the “natural resilience of sound to create overlapping narratives between a variety of works”. The result is an exhibition that aims to explore the ineffable intuitive process that takes place between artists and curators in creating a show, set up in the reworked communal space of Alt Stralau 4 as one single dizzying soundscape.

The opening night is followed by an after party with Berlin Community Radio at the same address. 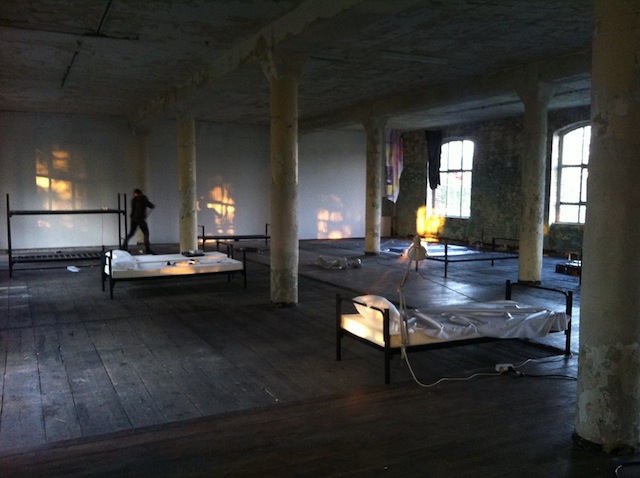 Nearing a year since its official radio show launch, BCR has developed a solid platform with a steady stream of diverse content filling in the live schedule. From experimental noise on Noisekölln, to slick mixes on Berlin artist Heatsick’s self-titled show, to the latest tunes from Berlin record label Blackest Ever Black, BCR takes its music seriously.

No Fear of Pop joins the line-up with some future-thinking pop, as does Ilja Karilampi with a weekly music/noise segment. But BCR’s range extends past music, with a bi-weekly feminist panel called HYSTEREO, a segment by online publishing house General Fine Arts, and one by Berlin-based art space Mathew Gallery, among many others.

The launch of the new website comes together with the launch of the BCR Zine, a round-up of some of the station’s favorites by the various contributors, including Earworm with its hosts’ favorite tracks of the week.