The Denying the Inflammability of the Twigs Found in the Copse this Morning group exhibition is on at London’s 3236RLS, opening October 13 and running to October 22.

Organised by Felix Riemann, the installation and screenings will include video works by Luzie Meyer, Nikhil Vettukattil, Shaun Motsi and Cornelia Herfurtner. The opening night will feature live sound by Patchfinder, and DJ sets by Calder Gillie, Matilda Tjäder and Zoe Williams.

The press release leaves little to be revealed, but instead includes an open-ended narrative that takes place “in a courtyard, on a mythical stage, understandable home-zone, home to the half rendered.”

The project takes the form of an installation in a gallery space, where visitor experience is crucial to the investigation into individual movement within systems defined by mediation and mediating technology.

The work starts with feelings around TV and home cinema, and somewhat echoes a text Lawrence includes on his website (johnlawrence.tv) about crying at TV and mediated or fictional storylines. From there it expands into objects, 3D prints, sound designed by Mark Good and a gallery text commissioned for Pro Numb by Dr Cadence Kinsey.

Also commissioned by director Chris Rawcliffe is a light box called ‘Chateaux Double Wide series (Chamber Aide)’ by artist Zoe Williams, which, as usual for the North London space, will launch and be lit for the duration of Lawrence’s show inside.

Pop-up restaurants proliferate in London these days, spurred on by the fomo-hyperbole of social media. Esperanto, a “multiethnic” global restaurant chain concept is the latest on the scene, according to its curators. Taking the simulacra of the rituals surrounding food as its theme, the show curated by CURA. Magazine at Rowing and running February 19 to March 19 has assumed the name of ‘Mr Bow’, a fictional character, as its head chef —to launch the first in a series of ‘food of the world’ eateries in the culinary-obsessed setting of London. With a Yelp page in addition to a sparse website, Esperanto walks a tricky line between appropriation and irony, emulating the cuisine and look of a traditional Chinese restaurant, but one transplanted from the future by way of a reliquary to a stage-set from a Quentin Tarantino film. With a new work by Sean Raspet at its core, the ‘restaurant’ is made up of pieces by Emanuel Röhss, Sean Townley, Zoe Williams and Amy Yao.

The gallery is presented as an intimate restaurant. Its walls are painted an enthusiastic Naphthol red – a flat, ripe-cherry hue usually used for spraying automobiles – and the floor is newly carpeted in the kind of patterned burgundy that you might find in a middlebrow hotel lobby. A tableaux of works are lined up in front of the far wall and a long, low, lacquered table in the middle of the room is sparsely set with glass espresso cups and saucers. A white mound of rice is piled threateningly in the middle of the table. So tidily arranged is everything, so symmetrical, that the words feng shui can’t help but come to mind.

On closer inspection the mound is a casual layering of brown then white rice, with iridescent pearled rice poured on top. It’s Amy Yao’s ‘Bay of Smokes’, and it’s the first hint that all is not well under the sheen of artifice here; this food is preserved, shrouded, yet spoilt. The seductive pearlescence is repeated over in the large folding screen, ‘The Flight of O’ by Zoe Williams that builds on the pseudo-Orientalism of the room. Alternating panels are filled with a glossy black veneer inlaid with mother-of-pearl and other lustrous materials. The details on these panels start to emerge as the schema for some kind of ineffable recipe: a little mushroom or a bamboo shoot floats in a black void, and the central panel is a swirling kaleidoscope of tiny aubergines, mushrooms and almonds mixed with geometric shapes, which if it were to be described in Masterchef rhetoric would surely be an ‘explosion of flavour’.

Emanuel Röhss’s gargoyles ‘Hunger’ and ‘Thirst’ squatly sit either side of the screen, the ‘studio debris’ that they’re made from poking out of the blue-green patina —Wotsits and dirt escaping from their admixture like worms out of a compost bin. Towering over them are Sean Townley’s ‘CF/SG/NM’; carbon-fibre and epoxy bear and pig-pelts hanging from ornately swirled flag poles, completing the strange symmetry of the curation. They’re reminiscent of the kind of heraldry you might get in a medieval banqueting hall —lending grandeur to the proceedings —but instead of family crests they pay homage to the animal’s flesh, luridly mimicking the fabric of a cheaply-made ‘disco diva’ outfit that you’d find bopping around the light-up tiled dance floor of a 70s tribute nightclub. That is to say, the theme of simulacra doesn’t skip a beat here: imitation is the name of the game.

All this serves to play backdrop to Raspet’s ‘Maillard Process Simulation 0.1% in Water’. A bog-standard metal tea urn sits incongruously in the opposite corner, spotlit, the reflections throwing shapes onto the cherry-red walls. The work (technically what is inside the urn) is the only thing on the menu at Mr Bow’s dinner table —a bewilderingly long list of unpronounceable chemicals to whet your appetite —and you can try it. I hope that someone finds the restaurant’s profile on Yelp and decides to pay it a visit to impress their date. I wish I could be there as they mistake the invigilator for a Maitre’d, and, raising the morsel of clear liquid to the light, swirling it around as though trying to imitate a sommelier, sniffing it, a subtle sweet-yet smoky smell fills their nostrils. It smells like —Peking duck! Tentatively putting the cup to their lips an umami duck-ness comes through, which surprises by its power in contrast to the unassuming clear liquid that delivered its flavour. “Raspet’s Maillard Process Simulation is delicious” one will confer to the other, before hedonistically sticking their forefinger deep into Yao’s rice mound, they just couldn’t help themselves.

Undoubtedly set to scare off the #cleaneating brigade, the chemical-infused water is a twisted version of Willy Wonka’s three-course dinner chewing gum: the desire to have the flavours of real food without all that bother of actually cooking and eating. A quest to have a single perfect uniform food. The peculiarity is that a ‘Maillard reaction’, as well as sounding like ‘Mallard’ – a very English duck – is actually the chemical process that gives browned foods such a delicious flavour. The depth of flavour of porter or brown ale for instance, or a dark, crispy skin. In making a clear liquid which contains all the hallmark smells and flavours of Peking duck, Raspet is not only highlighting the insane artificiality of commercial food production, but the very un-delicious drink plays with the idea that the food on which it’s based is an imitation anyway; this scented water becomes food by the design of its own accuracy.

Spilling forth a mood, a feeling of authenticity, the reassurance of familiarity that unites all these works serves to hide a sinister uncanniness in plain sight. Whether or not the show as a whole takes a critical approach to an economy where symbols behave like materials or makes a joke of it in the style of an easily accessible otherness in its desire to be plugged into a global network is perhaps a question that can only be answered after it evolves into other ‘world food’ pop-ups in its travelling incarnation. When the pastiche hits so close to reality, is the recourse to Asian imagery simply exoticising an already filtered and warped simulation? **

The Esperanto group exhibition curated by CURA., is on at London’s Rowing, running February 19 to March 19, 2016.

Artist duo It’s Our Playground brings a new show titled Show Room to Paris’s artist-run non-profit Glassbox, where it will run from May 6 to June 23.

Camille Le Houezec and Jocelyn Villemont formed IOP in 2009, using the platform to create exhibitions, internet projects, scénographies, and installations, using their curation as a medium in and of itself. 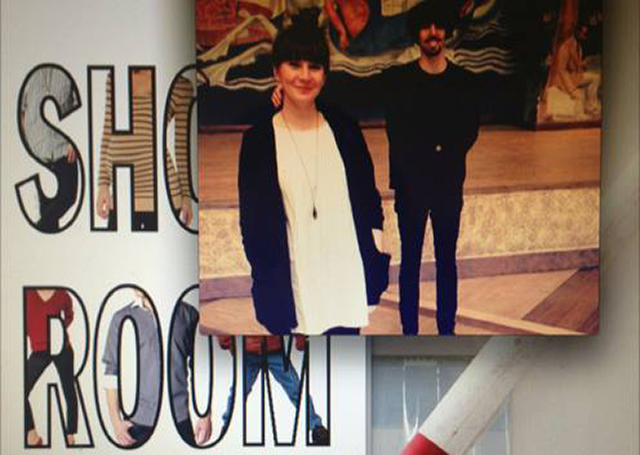