London’s Assembly Point is presenting a programme of interactive screenings, performances and discussions called Tableaux, running May 4 to 31.

Focusing on artists’ moving image in relation to the open interpretation of its title, the season will present events curated by invited artists and organisations —including aqnb and video partner Video in Common on May 6— in twelve events over three weeks.

Those presenting include the art space itself to open, as well as Slow Bounce, aqnb and George Mellor/Sister Arrow with Rosalind Wilson in the first week. There will be screenings and performances coordinated by Europa and Åbäke, Nicholas Brooks, Charles Richardson, and Film London Artists’ Moving Image Network (FLAMIN) in week two, as well as programmes from Frieze, Lea Collet & Marios Stamatis, Eva Papamargariti, and a rather Joseph Townshend and Ruaidhri Ryan to finish.

See the Assembly Point website for the full programme.**

London-based duo Lea Collet and Marios Stamatis are performing at Offset by Vivid Green, a show at Peppers in the West Wales Art Centre on March 11 and 12.

Organised by fellow Slade School graduate Rebecca Loweth, the show opens with Stamatis and Collet’s performance and runs to March 24. They will also perform, responding to a video Loweth has made during the following evening alongside a conversation and series of artists talks held at the West Wales space.

The combination looks to be an interesting one, with Loweth’s work responding to how the landscape of her rural home town is romanticised by stories and local anecdotes of its history, and Collet and Stamatis’ work centred around the urban practices of performance, affective labour and aestheticised work.

The project inaugurated its ‘Mezzanin Series’ with Emily Furneaux (nee Shepherd)’s emilytofurneaux@gmail.com exhibition and a performance by  Marios Stamatis and Lea Collet of ‘Trailer for a Remake of Chorus for Four’ on December 6.

London’s Assembly Point is hosting Gilded Ceremony to accompany the Faith Dollars, Taxfree Imagination & Uptown Bliss exhibition –running through and during Art Licks Weekend –to be held on October 1.

Organised by artist Marios Stamatis the event, including spoken word, live music and performance, complements the Faith Dollars… themes of what its press release calls “financial abstraction, absurdity and surrealism”, as explored through the “contemporary experience of post capitalist realism”. 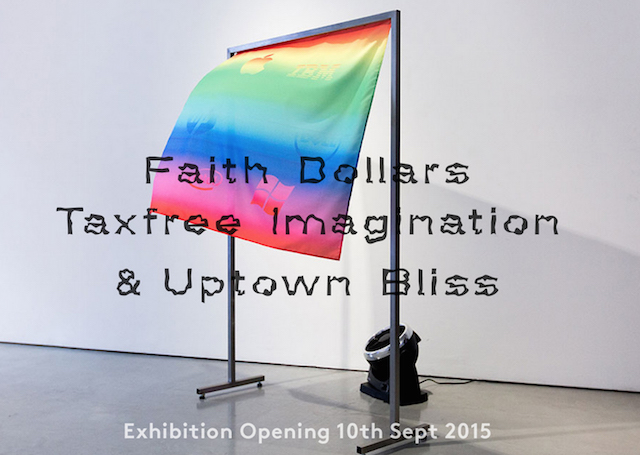