An ongoing collaborative project by gallery founders Samuel Levack and Jennifer Lewandowski, with curator Nat Breitenstein, the first Grand Magasin, with its concept of presenting an exhibition and shop, took place in 2013 and featured the like of Leslie Kulesh, Yuri Pattison and Daniel Kelly of Peckham art space/hair salon DKUK.

Los Angeles 2019 is hosting Edge of Human, a performance project by Lucy Woodhouse, in an offsite exhibition taking place at a pop-up location at 70 Paul Street in London, running from November 14 to November 20.

Los Angeles 2019, the new offshoot of French Riviera developed as a focus on experimental projects and performances, brings Edge of Human as a dynamic, collaborative exhibition that uses a fluid approach to curation. The entire project will be documented and, later, used as material by Woodhouse for a new online work for the Los Angeles 2019 website.

The evolving collaborative project was created by Woodhouse, taking performance as the starting point and incorporating a host of artists, writers, curators and musicians into its week-long fold. Some of the names taking part include Beatriz Olabarrieta, Marie d’Elbee, and Joey Holder, who will DJ the opening party, along with approximately twenty-eight others. 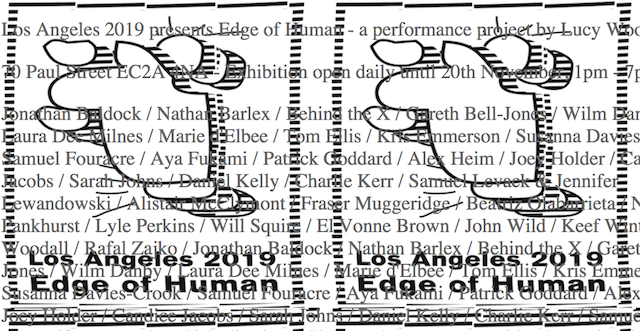 A one night only event that went on for longer. Replica Sentiments at London’s French Riviera features luxurious silk wall hangings of pixelated deluxe watches. Rolex. Panerai. Ferrari. Opulence compressed to Kb and filtered through spam into Fabienne Hess‘s terrifying collection of data debris. It’s junkspace in a folder, content catering to the artist’s habits, supposedly, but scraping a browser window full of ideas and images her eyes never noticed.

There are products for the rich and sentiments, feelings, for the poor. A crumpled paint on plastic announcing OH NO! hangs from a wall, the unequal reality of “crisis globalisation” tumbling limply from a wall heater in lowercase: chance. A French Riviera storefront window installation confronts passersby with emotion (“I am very happy”) robotically expressed, fed through an inbox and meticulously collated, edited and displayed on glass. There’s a mantra for August 11: We’re sorry to see you leaving. Or there’s this one from earlier: You are not phobic or autistic. I wonder if said subject is working from a browser history.

Like the artist’s Unknown Face Fragments series (2013) before it, the Replica Sentiments exhibition takes from the trash that most ignore and reinstates it as something one-of-a-kind, limited edition, an artwork, worthy. A brilliant exhibition text by Basia Cummings Lewandowska draws more insipid connections. Taking its title, We’re happy to help and some prompts from the spam calendar window, the writer tracks the history of unsolicited email to the naming of ground-up tinned meat as a portmanteu of ‘spiced-ham’. It’s miscellaneous matter that mirrors what Brad Templeton calls (as cited by Lewandowska) the “real-time multi-person shared environment” of early USENET messaging, now compacted into a “still unwanted, unsolicited – link to a world that is split by neoliberal claims to free markets and democracy, and a desperate politics of economic inequality, conflict, hunger and disenfranchisement”.

Hence the spam filter as a closing off and shutting out of a “more vulnerable, needier, poorer world”, where 419s from South Africa, Nigeria, Benin, Togo, Ghana, Ivory Coast; Kazakhstan, Pakistan and India become a HELP ME! promptly identified and discarded by bots. Out of sight, out of mind. Hess’ Replica Sentiments, on the other hand, makes us look, listen; bringing an inconvenient reality out of the in-between and into full view as a reminder: “My friends are ground in spam”. **

Fabienne Hess’ Replica Sentiments was on at London’s French Riviera, running from July 16 to September 7, 2014.

An exhibition and shop, in an art gallery and shopfront, French Riviera draws its title from its own Gallic origins to convey the ‘department store’ concept of Grand Magasin. It playfully examines, not just the links between art and commerce but the shaky tenets on which these apparent distinctions exist. Exploring and ultimately deconstructing these divisions, or ‘departments’, across “artists” and “non-artists”, artworks and objects, curator Nat Breitenstein presents work by 50-plus contributors in the tiny Bethnal Green space. It’s one you could hardly fit in to at its opening, being packed with people and objects; a mass of ‘things’ bundled on tables, shelves and walls. Artists and gallery owners Samuel Levack & Jennifer Lewandowski’s light blue ‘One Minute Disco’ caps are occasionally knocked off their hooks, while Harry Burden’s glazed ceramic pun of ‘Potential Accidents’ (Banana Skins 2013) are scattered around the floor and as precarious as the notion of permanence at an event described by its own press release as a “fluid process that develops, changes and grows as it goes along”.

Commodified and re-contextualised, with no information beyond a price tag, you might then miss concepts drawing from Virilio’s “integral accident” in Burden’s practice, or Donna Haraway’s A Cyborg Manifesto in Leslie Kulesh‘s framed print, ‘As long as you love me’. Red-nailed fingers suspend a tablet featuring a hyper-realised Dakota Rose and remediating the “multiplicities of being defined” originally illustrated in the 2012 video ‘As Long As You Love Me: A love letter from Dakota to Donna’: “if you want to see me. Leslie. Just go online”.

Perspective and its reproduction is explored in Yuri Pattison’s reformatting of a reformatted format (about formats), in ‘Ways of Seeing PDF’. Here he reproduces his online PDF ‘ways of seeing WAYS OF SEEING’ in physical book form. Online, photocopies and scans, zoom in and re-present the original 1972 publication across windows and scroll bars, while sections of pages are outlined and underlined, drawing attention to passages like, “men look at women. Women watch themselves being looked at”. It’s a self-perpetuating loop of focus on established cultural norms that the John Berger-presented BBC series the book is based on, purports to challenge (“a large part of seeing is based on habit and convention”). But, in drawing attention to the ways in which technologies mediate these established habits, they only propagate them further. As technologies evolve, whether through photography or .pdf, these old formats and ideas persist, not only as the digital or a broadcast medium reapplied to the book form but in the question of what it is you’re paying for when you buy it: is it the information or the card it’s printed on?

Framing, perspective and the lexical shifts that come with it emerge on the silk surface of Fabienne Hess’s Unknown Face Fragments prints series. Here, artworks and familiar popular cultural portraits are fractured almost but not quite beyond recognition. Because archetypes persist and that’s mirrored by the protruding eyes of Levack and Lewandowski’s totemic Jesmonite and plaster ‘Pilgrim Shells’. The mystical connotations of their titles echo the primal impulse that Kulesh identifies as being behind the “cyborg stand in” of a social media avatar in the ‘As Long As You Love Me’ print, hung among them. Will Cruickshank’s ‘Logs for Sale’ wood-cut print not only identifies the advertisement as the actual point of value in goods exchange, but mirrors the model of ‘artificial scarcity’ by making it available as one of only 14 editions –a sales model shared by art galleries and the Disney Vault alike.

The consumables at Grand Magasin aren’t limited to products though. There are edibles from Kitty Travers’ ‘Candied Citrus Fruit’ and services from Daniel Kelly’s DKUK pop up salon, coming on Saturday December 7. Another Kelly work, ‘Tunisia riots see 3, set to fly home’ reflects the distance, degradation and disconnection with the realities of a country from the voyeur’s perspective, virtual or otherwise. It’s an account of tourists being evacuated during civil unrest in the country through a browser view of a Daily Mirror headline partly obscured by a Google image of a burning resort, courtesy of Getty Images.

While the Grand Magasin press release speaks not of the “difference but rather of divergence” of its unquantifiable conceptual and material elements, what’s more interesting is where they converge. Didactic panels give way to sales tags, the information limited to the name of its creator and a price arbitrarily applied by any number of nebulous considerations. Here, the distinction between artist and artwork, person and product collapses; context vanishes, and all that’s left is some things you can pay for. **

Grand Magasin is running at French Riviera from November 30 to December 15, 2013.