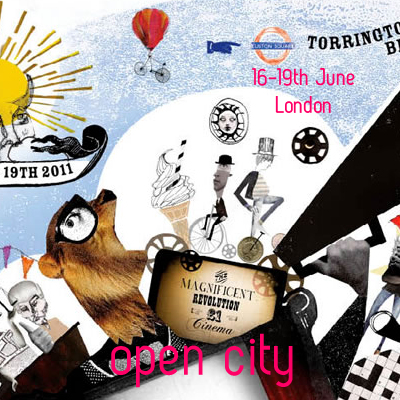 We told you about their contest last year and now we have most details about the upcoming London documentary Festival “Open City” coming up next month.

With the ambition to give more visibility to this non-fictional film category Open City is born as a festival to place a purely documentary date in our busy summer calendar. We have set up Open City because we believe there needs to be a place to hear the stories that matter: stories that, all too often, remain untold: lives unrecognised, abuses ignored, follies forgotten, connections unrealised, joys uncelebrated. We need an occasion to celebrate the meeting of art and journalism that defines great documentary.

In this first edition Open City will pay special attention to the “world of strangers”, how we live surrounded by people we don’t know always capable of great or miserable things. Are we alienating ourselves in such modern world from the most basic social patterns? The divisive conflict between solidarity and diversity: we are happy to support those we feel to be like ourselves, but what about newcomers, strangers, peoples who make very different life choices than ours?

With a great (and long) list of recent documentaries Open city will try to “mitigate this conflict by asking that age old question: who is my brother, with whom do I share mutual obligations?”

The Program & calendar hasn’t yet been unveiled (nor the winners of course) but we already have the list of all the documentaries that will be shown during those 3 days (along with the venues & times).

Along with the festival there are many other events taking place that complement (and enrich) the festival itself bringing a lot of material to watch next month like a focus on Polish or Czech films, the Ethnographic Film festival of the Royal Anthropological Institute or a particular date to talk about Guantanamo.

One more thing! There’s this other competition which finishes this month but you may have time to participate… “My Street”, a UK nationwide competition for you to make a short documentary film about your “street” and it is a new website where your film will be seen, telling the nation’s stories, street by street … by you. www.mystreetfilms.com.

As you may have seen from the trailers above the subjects & topics cover are as varied & complex as the human being itself, so we really (if you happen to be in London during those days of course) encourage you to go & pick one, two or 20 documentaries for those 3 days … 5£ each (if you can manage).

Then tell us which one you liked the most. More details, program, ticket links etc on their page.