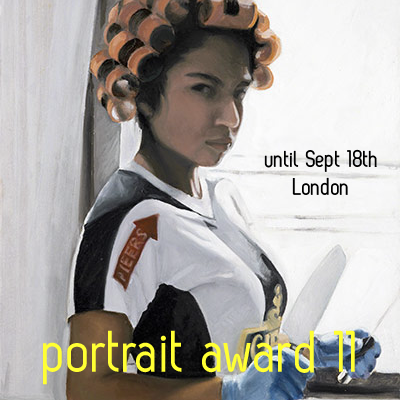 Wim Heldens got the always helpful £25k award from the BP funds for his “Distracted”!

Wim Heldens is a self-taught, professional artist who lives in Amsterdam and whose work has been seen in numerous group and solo exhibitions in Europe and the US. He was a BP Portrait award exhibitor in 2008 and 2010. His sitter is Jeroen, a 25-year-old philosophy student to whom the artist has been a father figure since he was four. He has sat for him over 20 times, and is pictured here leaning on a section of wall with a pencil in his hand wearing the black and grey of which Heldens says, ‘he only seems to be wearing these days’.

For the past few weeks everyone has been speculating around this year’s winner… a few voices hoped Louis Smith’s provocative  “Holly” would get BP’s generous sum. But his painting of a model chained to a rock that is 8ft-high as a canvas didn’t get the prize, the jury went for a rather more conservative piece… for a change.

Ian Cumberland, 28, took third prize for his portrait of a friend.

So until mid-September you’ll have the opportunity for some good portrait canvases @ The National Portrait Gallery. Pop-in, have a look, come out, and tell us about your favorite.

The annual BP Portrait Award is the most prestigious portrait competition in the world, promoting the very best in contemporary portrait painting. Over the past thirty-two years the Award has proved the launch pad for the careers of many successful portrait artists.