Net nihilists Death Grips love to cause a commotion. If it isn’t splitting from their label in a most spectacular fashion by dropping an album before its official release date, then its providing raw aural assault with the message that ‘no, it’s not going to be alright’. Now their latest video drop for ‘Lock Your Doors (No Hands 6)’ from last year’s No Love Deep Web, is again based around their No Hands series, which is in turn based on hands-free devices, which in this particular case come in the shape of head-mounted cameras filming their recent performance at SXSW.

In an interview with aqnb, drummer and public mouthpiece, Zach Hill, said their last album “would be if someone came and ripped this [curtain] down and behind it there was this whole other dimension that went on infinitely. It’s definitely not an ending. It’s more like discovering a tunnel behind.” Perhaps, after five cryptic forerunners, ‘Lock Your Doors (No Hands 6)’ is that very (loud and painful) tunnel. You can watch the earlier videos on their YouTube account here.**

Death Grips do not care about money. If you think that the secretive Sacramento trio have sold out to the man in the form of a label signing to major label Epic Records (Columbia in the UK), then think again. Recording their latest album The Money Store, at the same time as their wildly successful mixtape Ex-Military in 2011, as well as No Love to come later this year, the hardcore hip hop act are an addictive blend of brilliantly abrasive audio appealing to that sadomasochistic death drive that kept Sigmund Freud so amused.

Because, if Death Grips were a drug, then they would be the hard stuff. They bring you to a place where finances disappear with your sanity, leaving you stripped bare and with an overpowering sense of doom and its inevitability. Fascinating and enticing, The Money Store is more of the aural assault that had ‘information overload’ and ‘data noise’ bandied around like a viral video with Ex-Military and its effects are equally insidious. Drummer Zach Hill describes their creative vision as a “Warholian nightmare”, while MC Ride (aka Stefan Burnett’s) poetical insights are like snapshots of a man gone mad. Songs like ‘Hustle Bones’, ‘Double Helix’ and ‘Fuck That’ ride on a wave of hyper-melody driven by mania, while themes of paranoia languish in a bedlam of cultural collapse and total chaos, best expressed by the fit-inducing video for ‘I’ve Seen Footage’. A power point presentation gone wild, images are thrown at its viewer with not a moment surrendered for absorption, let alone comprehension. Aggressive and often bleak, someone out there thought Death Grips would fit in somewhere between soul singer Adele and boy band One Direction, hence being signed to Columbia and exploring the mainstream potential of a sentiment suppressed by many but shared by all.

Are you releasing two albums in a year to keep with the theme and intensity of information overload?

Zach Hill: Possibly. That’s part of it, to a certain extent. But the main reason behind that is purely because we have enough material. We basically have made two albums and we have different emotions behind them and each one’s different in different ways. We also like the idea of getting behind two releases in one year as absolute, rather than a free mixtape or something. We approach a lot of things more in how visual artists do. Where you finish a show and, rather than putting out pieces in a group show or something, we perceive it as there are two museum shows going up this year because we have that much work.

We like the idea of putting out two major pieces in one year and both of them functioning, musically, as very cohesive with each other. It’s not like a major flip in sound, from on to the other, but there’s an emotional tone and quality to each album, sonically, that’s slightly different. No Love, that comes out in the fall, I’d say, is slightly more aggressive and darker.

ZH: [laughs] Yeah, I guess there’s more suffering within that record. I mean, there’s a lot of suffering in all our music but I’d say there’s a more agitated tone to that recording.

Again, back to the visual art thing, we’re perceiving it as… The Money Store is more like pop art level, to where there’s a bridge and a lot of expansion musically. It’s still very aggressive with lots of those same feelings and emotional chords throughout the music but it’s more of a bridge to the third one that’s acting more like pulling the whole curtain down. Sorry, I’m not very good at talking about our music.

ZH: We talk very abstractly about the music. Basically, this one acts as this bridge to No Love. We always refer to it as the hammer falling down. It’s more…

ZH: ‘Something like that. It has a different kind of vibrancy to it. It’s very awake. If The Money Store was in a dream state, No Love is when you wake up and all the things about reality are right there in front of your face and you can’t avoid it. [laughs]

By saying that No Love will be the ‘curtain falling’, does that mean Death Grips has a predestined end point?

ZH: No, no, no, no, no! I didn’t mean it in that sense. I mean, if you visualise The Money Store as this curtain that has this amazing setting in a room, there’s this big curtain and we raise that up. It’s very vibrant and it’s got more of a pop iconic thing going on in The Money Store. You’re looking out of this curtain and then No Love would be if someone came and ripped this thing down and behind it there was this whole other dimension that went on infinitely. It’s definitely not an ending. It’s more like discovering a tunnel behind. 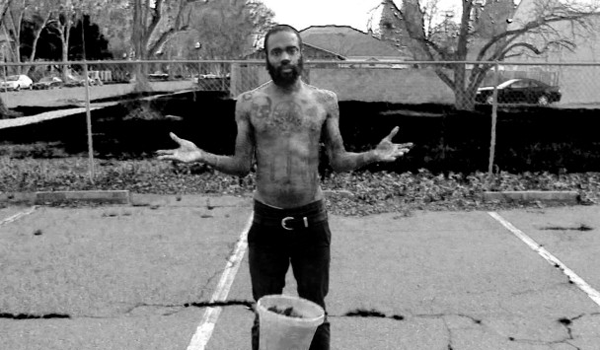 So it’s like waking up from a nightmare into another nightmare?

ZH: [laughs] Yeah, totally! Or it’s like, all of a sudden, this dream becomes very lucid.

The dream might be lucid but Death Grips is quite obscure in contrast.

ZH: It is, in a certain sense. It’s a hard balance to not become alienating and alienate yourself but we like to keep the focus on the music. It’s definitely conscious but it goes both ways. There’s no hiding behind anything but when we started the group, we talked about never revealing who was who because we wanted to create music that was concentrated on that isolation and to take away the individuals of the groups. We perceived Death Grips as its own entity and something larger than ourselves. We wanted to take ourselves out the equation and create something that is separate from what our day-to-day lives are.

When we think about artists and bands that we love, that we gather the most energy from and are most inspired by, we think about artists that have operated in a similar fashion. The ones that are more focused on what they’re making or producing, rather then what their personal life is or what they’re doing in their the day to day. It’s a hard balance because it’s really interesting to get into that world when you’re a fan of something. At the same time, from a fan perspective, opening up too much about what’s behind the music that I love can also take away from that mystery. It starts making it too literal when what I liked about it was that it was un-literal because I gained from it naturally.

I like what you said about a visual artist’s life never being that important in their work. Unless, of course, it’s after their death and it’s Andy Warhol.

The concept of individuality is a major theme of Warhol’s work and you said that you, as a band, want to stay more elusive, in order to de-individualise yourselves, in a way. It’s weird that modern democracy is so focused on individuality but the outcome seems not unique at all.

ZH: Yeah, exactly. There’s this whole idea of identity and singularity. It’s really interesting. It’s like the snake eating its own tail; that whole cycle where through all the individuality it kind of becomes this one-ness, one thing.

When we talk about these ideas, while we’re making music, we don’t talk about it in an absolutist tone, like we know what we’re talking about. It’s just kind of things we discuss like everybody; where you’re just observing things without having any answers. Not having answers and not being thoroughly clear on all these things but just recognizing that they’re happening around you. It’s a part of that inspiration and that confusion.

What’s the aim with being on a major label?

ZH: To expand on these ideas. Getting resources to broaden the vision. As far as Death Grips is concerned, it’s about perceiving it as its own entity. We want that to grow, musically-speaking and through the content, as large as possible but not with ourselves attached to it as individuals. It’s very simple. We need to maximize our art by having resources for straight-up ideas that cost money. That provides us with resources to further our search within our art. That’s basically what it comes down to.

There’s that and also the expanding of awareness of our group. We want this music to go as far as it could possibly go. The way that exactly we want it to go. That’s happening as well because we got a very excellent record deal where there’s no one in charge of this thing, except the three of us. That’s for certain.

It’s all about expansion and being able to further realize your creative ideas and make them happen. There’s still an infinite world of things you can do with zero but it’s also nice to know that if you have an idea that requires it, it is also a possibility.

Death Grips’ The Money Store is out now on Columbia (UK) and Epic (US).