Presenting a new Slip Off painting series and an installation called ‘I’m a bit out of sync but next time I’ll do better, I promise’, Estna takes an online messenger service Sticker Store as inspiration for her ongoing exploration of painting as a medium in parallel to these digital modes.

Pondering what the press release calls “the idea of a surface as a means of communication” the Corporate Jungle and its concept lingers between ideas of “the abstract and the overly representational”.

Some would say that to be a woman is to long. For what exactly it is difficult to say; the target shifts continually as one approaches. In New Waiting, a recent collaboration between artist Sophie Jung and curator Juste Kostikovaite, the idea of longing is taken as the starting point. More specifically: female longing in the digital age, which is a new, headless kind of beast.

The installation is introduced with a scene with Vladimir and Estragon from Beckett’s Waiting for Godot, but the latter name is replaced with Estrogen. Otherwise, the words remain intact. The replacement of Estragon with Estrogen is telling: Estragon is the fall guy, the dunce, the complainer and the forgetter—the shameless one. That the role of the stupider, weaker character is replaced with the hormone integral to “femaleness” is telling and sets the stage for Jung’s “private onesie-purgatory of infinite, weightless waiting”.

VLADIMIR:
It’s for the kidneys. (Silence. Estrogen looks attentively at the tree.) What do we do now?

VLADIMIR:
Yes, but while waiting.

ESTROGEN:
What about hanging ourselves?

VLADIMIR:
Hmm. It’d give us an erection.

VLADIMIR:
With all that follows. Where it falls mandrakes grow. That’s why they shriek when you pull them up. Did you not know that?

VLADIMIR:
From a bough? (They go towards the tree.) I wouldn’t trust it.

ESTROGEN:
We can always try.

The Luxembourg-born and London-based artist’s practice routinely addresses representation and its pitfalls, both personal and cultural, as seen in DOUBLE, her joint exhibition with Shana Moulton, and her performances from Learning About Heraldry at Ceri Hand Gallery. With New Waiting, Jung turns her sharp eye to the tropes of historicised feminine obsession, examining what it means to be a woman and to long in the modern world in a new “virtually emoticised” state of waiting. Smart but water-damaged devices wait in heaps of uncooked rice at the gallery floor while its walls are filled with the echoes of a yodel, understood as “an ancient alternative to the high-frequency 24/7 just-aboutness of fb/twitter/insta/gmail messaging hysteria”.

New Waiting by Sophie Jung ran at Tallinn’s Temnikova & Kasela from March 3 to May 3, 2015. 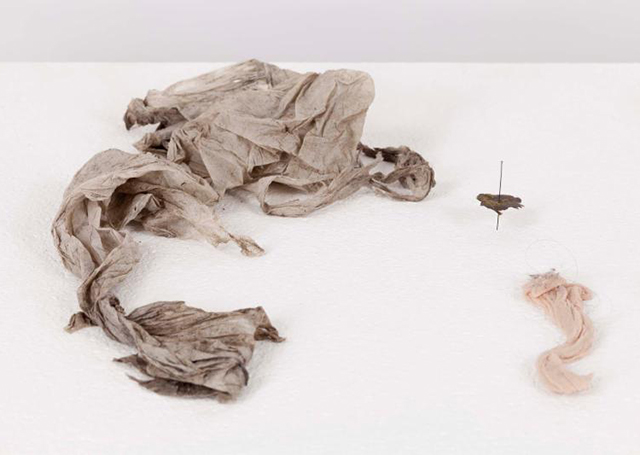 Happening in parallel to Frieze week, the third edition of NADA New York is running in the city, May 9 to 11.

Showcasing emerging international art and artists across various locations annually, including Cologne, Miami and Hudson, the NYC program features a presentation of interactive art projects from San Juan’s Beta-Local and Detroit’s MOCAD, as well as a site-specific installation in a Ford Galaxie 500 by Shoot the Lobster, including work by Lena Henke and Marie Karlberg of M/L Artspace and Bradley Kronz.

There’ll be gallerist tours of the exhibition and a “marathon reading” of contemporary poetry on May 10, including Sophia Le Fraga, Ben Fama and Deanna Havas.

At the time, I thought it was just another addition to the multi-sensory experience that Warwick strives towards; a bodily transcendence founded on a powerful conceptual bearing. By now I’ve figured otherwise. Said ‘feminine fine fragrance’ reappears, again and again, as a bootlegged ‘climate change’ sweatshirt and the “clear chanel” of his RE-ENGINEERING artist statement, a manifesto of sorts accompanying what he calls the “11 blobs” of his upcoming vinyl release, out through PAN on November 26. “It’s the smell of modernity”.

Warwick is as much a musician as he is an artist and intellectual, the distinction as imperceptible as his life view is malleable. A Berlin-based performer steeped in a visual culture orbiting but not limited to the city, his first full-length as Heatsick is littered with references to the contemporary art discourse and theory that he disrupts, dissects and often parodies, in the same cyclical way that RE-ENGINEERING ends as it begins, if not in a distant, degraded form.

Fellow artist Hanne Lippard’s colourless, disembodied voice preens, over measured exhalations and a crisp melody evoking a dial tone, as she robotically engages in a disintegrating loop of references; speaking, quoting, sloganeering, “black power”, “gay Google”, “what we do is secret”, “labour in the bodily mode”, “second annual trend report”, over a rhythm that is less a groove than a forward lurch. Warwick’s manifesto’s “relentless interconnectivity” carries on, across ideas and ideologies, philosophers and philosophies, even past recordings and present tracks, surfacing and disappearing across its track listing.

“I’ve just really thought about these things, they’re such concerns,” says Warwick through Skype and on tour in Australia, about the ideas and aesthetics that he often explicitly explores, sometimes abuses, on RE-ENGINEERING, “That’s the thing with a lot of network theory and circulation. I’m really trying to link a lot of ideas, or map my own ontology, or even some kind of mode, and I’m trying to think about why I think that. Sometimes, if I see people referencing certain philosophers or schools of thought, and it’s just a bit of a quick joke, you feel a bit short-changed, and not in a particularly subversive way.”

Jesse Garcia purrs, disjointedly in ‘DIAL AGAIN’ emulating the stilted automated voice, deliberately, poorly, over swaggering toms, while Warwick’s voice comes through a far-off megaphone, beneath the noise of a field recording, repeating Lippard’s words (“Modern life is still rubbish, you say. Modern rubbish is still life”) from the beginning, now at the end, as it links into album-closer, ‘ACCELERATIONISTA’ –a circular motion of movement ending up where it began, but different.

“With RE-ENGINEERING, it’s playing around with treating it more like a manual. It’s like, ‘let’s look at these options and maybe you can reprogram yourself to try and get around this dissatisfaction’, or you could just also remould something,” Warwick tells me, following up an email listing ten artists he thinks are doing just that.

“Ed Lehan is known for his acerbic commentaries on participation and the public event. See his various shows where the opening will consist of a reconstruction of an empty charity box built by the artist, a case of beers, a barrel of mojito and the visitor(s). For the one at a gallery in Tallin [Error 404 at Temnikova & Kasela] he reconstructed an adizone that had been popping up in various parts of London for the Olympics.”

“Georgie Nettell’s last show [2013 at Reena Spaulings] dealt with notions of recycling, circulation and eco branding. Local dirty dishes were picked up in restaurant bus trays and re-presented in the gallery, images found on the internet were downloaded, distressed and formatted onto raw linen canvases. Her musical group, Plug (with Sian Dorrer), also used a stock image as its cover, confusing the listener as to the public image of the group. “

“Katja Novitskova uses images found on the internet such as wildlife and prints them out, mounting them in physical space and opening up the notions of documentation, preservation, ecology and materiality. The digital image is itself fuelled by carbon materials and minerals extracted from the earth. Species on the verge of extinction are fed back into image circulation and, in turn, play with the neuro-chemical recognition mechanisms in the viewer’s brain.”

“Paul Kindersley’s thebritisharecumming YouTube channel  is best viewed left running during a morning after with genuinely bizarre makeup tutorials, presumably also made the morning after (perhaps a satire of the MT genre themselves) at once absurd, daft, unnerving, hilarious and engaging. Current fave: Babes (correct usage).”

“Gili Tal presented REAL PAIN FOR REAL PEOPLE [at LimaZulu] as a wall text superimposed by four gestural paintings, evoking haptic gestures and waiting room paintings. The text consisted of the “goriest parts of Marx’s Capital” (itself full of references to Dracula and Frankenstein), written in languages from post-Communist countries and presented with the deceptively friendly aesthetic of an Innocent smoothie, one visitor was heard to have described the show as “Muji Expressionism”.”

“Sabine Reitmaier is a photographer and artist whose work blurs commercial and fine art contexts. Her show [Not comme les autres at Galerie Friedlaender] last year consisted of portraits of models staged in a similar method to how she would present them for the Psychologie Heute covers she also shoots for. In the exhibition, the large format photos confront us, provoking how we make neurological recognitions and associations, down to posing, body language or the coloured backgrounds that Reitmaier herself painted as per a photo shoot.”

“Hanne Lippard‘s vocal register evokes the automated hold tone of a service centre phonecall and plays with pre-existing imagery found online. Her videos such as ‘Beige’ deploy wordplay and humour to comment upon the hyperreal mundanity of part time work, lifestyles and (non) space.”

“Sarah MacKillop‘s Ex Library Book is itself an artist book consisting of fragments of obsolete library books –withdrawn from circulation and sold off at a discounted price onto a discarded heap –presented as a shiny glossy catalogue. Her other artist book, New Stationary Department, consists of various materials found at various stationers, be it neon marker pens or corrective materials such as Tipp-Ex, found in the commercial office, highlighting and reworking notions of editing, work and commercial presentation.”

“Rachel Reupke deals with HD stock images in videos that, when stripped of its conversations, penetrate an eerie and uncanny atmosphere of social relationships and catalogue-like objects. The warm emotional bond of social relation deployed by advertising is stripped and the viewer is suddenly presented with a cold flat image.In ‘Containing Matters of No Peaceable Colour’ from 2009, the hard gaze confronts the viewer with a series of HD towels while an automated voice proceeds to obsessively list a lifestyle specification quota with the delivery of a Robbe-Grillet novel.” **

Heatsick’s Interiors is out now through Motto Books. RE-ENGINEERING is out on PAN, November 26, 2013.