This the Dutch art and design studio’s first UK solo exhibition, opening concurrently at Mumbai Art Room in India. The group will present their 2016 film ‘Information Skies’, which is informed by VR and dramatises experiential technology. The film uses live footage and animation, while thematically exploring concepts of authenticity positioned as “fictional provocations” and questions belief systems. The film includes a young couple in a forest with warriors, dragons, and dreams.

The show also includes a documentary film installation entitled ‘The Sprawl (Propaganda About Propaganda)’, a 70-minute “dive into online and offline truths, fictions, and their sponsors”. Benjamin H. Bratton, Maryam Monalisa Gharavi, and Peter Pomerantsev offer commentary in the video, which identifies “how planetary-scale interface culture is transforming geopolitics and state power”.

Together both films form a “new cinematic topography, creating fragmented territories of images and suggestions, and building a worldview that is at once attractive and terrifying”. 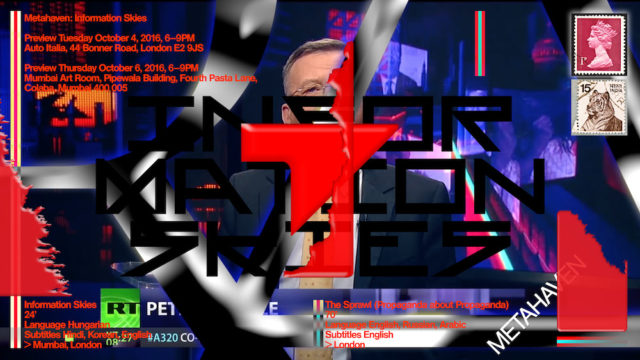 Amsterdam-based graphic design agency Metahaven are appearing in conversation with London-based strategist Benedict Singleton, along with a screening of their new work ‘The Sprawl’ at Rotterdam’s Witte de With, on November 24.

‘The Sprawl’ is a documentary art film that follows Metahaven’s earlier forays into video, including ‘City Rising’ (2014) and music videos for Holly Herndon. This partially Russian-spoken project exists at the intersection of several crises -the outbreak of Ebola, the conflict between Russia and Ukraine, and the rise of the Islamic State -and features interviews with Benjamin H. Bratton, Monalisa Gharavi, and Peter Pomerantsev.

As part of the Netherlands contemporary art centre’s year-long project Art In The Age Of…Asymmetrical Warfare talk and screening series running to January 3, the event will include the new work as a visual reference within an in-depth conversation with Singleton.