Continuing on with the cross-disciplinary multi-platform nature of Hannah Perry‘s collaborative Have a Nice Day artwork, bubblebyte.org has taken over the Create London website for the next two months, following the immersive performance piece, featuring Perry and a group of South London teenagers at  the Barbican, Saturday July 13.

Launched on the day, the take over will last until September 13 and features a visual response to audio collected by the bubblebyte team, during the lead up to the HAND final performance. From that they’ve put together a soundboard that has also been integrated into the Create London takeover experience, along with a legend at the bottom of each page, which will activate a song and an image inspired by the artists and the HAND process. If that’s not the ultimate expression of our transmedia, interactive, post-internet universe, we don’t know what is. See takeover on the Create London website.** 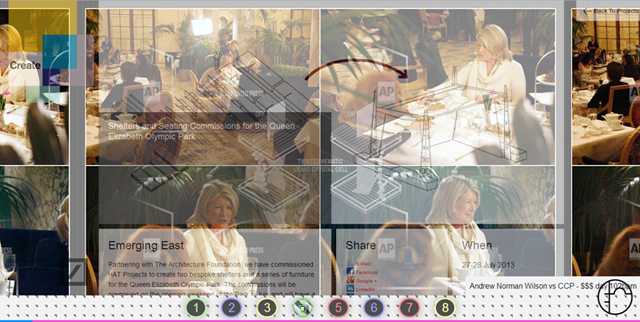 This includes “connected performances, interactive or generative installations, applications and other new connected devices” by artists who work on the internet and within networks to to create new connected art forms. See the Transcultures website for more details. **

Net art monopoly Anthony Antonellis has been running online gallery directory netartnet.net for a year and to celebrate he’s expanding the site and asked his readers to provide bumper videos (the short segments that come between programmes before cutting to commercial). As just another example of the rapidly expanding internet world  gaining credence as a significant movement in contemporary art, here’s to another fertile year in the netscape. You can see the netartnet.net website for more information and to watch some of the very creative bumper video responses here. **

Net artist Anthony Antonellis is the second to have a screensaver featured at ScreenSaverGallery. The art space aims to recontextualise work in an online setting and vice versa, in this case within the hitherto dead medium of the screensaver. In the same way that Olia Lialiana and Dragan Espenchied aim to keep GeoCities alive by keeping it in circulation, through new online mediums such as tumblr and IRL with their One Terabyte of Kilobyte Age exhibition, ScreenSaverGallery founders, Czech artists Barbora Trnková and Tomáš Javůrek, along with curator Mary Meixner, aim at reviving the screensaver by placing it in a contemporary art context.

The “post-internet” artist, Antonellis, is an ideal candidate -following a submission in March by Berlin-based artist, curator and art historian Robert Sakrowski -with Blue Brightness. Antonellis’ is the exploration of the link between the physical and the cyber worlds, in opposition to ideas of digital dualism, and surrenders the active participation of his user to the passive engagement of an audience, given the nature of the screensaver. The work is set to be distributed through the App Store, softpedia and elsewhere, while aiming to translate the exhibition in a physical exhibition context, as well as being disseminating online. You can download Anthony Antonellis’ screensaver here. **

If contemporary internet-based art is anything to go by, the world-renowned German artist Aram Bartholl could be qualified as a ‘conscientious objector’ of web 2.0. Indeed, right from his start in 1995, and later through his collaboration with the The Free Art and Technology Lab (F.A.T.), he skilfully forewarned people of the coercive power of technology, media and, to some extent, social networks. The exhibition ‘Retweet if you want more followers’, a title that reads like a daily mantra for any surfer, is an examination of the issues of interaction between the virtual world, reality and their collusion.

Working both online and offline, Bartholl’s keynote consists not only of contriving ways to measure the role of cyberspace in physical space, but also to take stock of the data world’s manifestations in the everyday. For him, common arguments centred on areas of public and private life have veered toward questions of “how do digital innovations influence our everyday actions?” This explorative research has been well-documented through the digital practice of ‘Surf-Sample-Manipulate’ theorist Mark Amerika in remixthebook:

“the early Net artists were, in many ways, ahead of their time. But now that has all changed. Net Art 2.0, like Web 2.0, is embedded in the practices and rituals of everyday life. You can’t be a Net artist today without taking into account where the impetus for turning the Net into an artistic instrument came from.’ (…) This may be the reason why so much of the artwork being created by next generations Net artists is less avant (ahead of its time) and more pop (in its time).”

Bartholl’s solo show presents a series of works playing on the idea that the Internet is a permanent, eye-catching stream of signs and codes we analyse and filter on a daily basis. Screens are our windows into the digital world, like painting was treated as a view to the real world during the Renaissance. ‘Print Screen’, reposing on a declination of negative, painted screenshots on paper, canvas, Plexiglas or aluminium, functions as a visual metaphor. It can also be perceived as an allegory for the short display-duration of images or data on the web, so as to make them elusive. ‘Your Art!!’ sets up private screens as public exhibition spaces, while ‘Private Password’ stresses the limitless landscape of personal data and its invading hackers with an engraving of 12,000 LinkedIn user’s passwords, stolen during the summer 2012.

More than an architect (by background), designer, hacker, and curator, Aram Bartholl assumes the role of a kind of social gadfly, that never takes itself too seriously. He subtly upsets our perceptions of Internet usage, challenging our passivity in the web community and attempting to define cultural activity in the digital age. Greg Leuch, his counterpart belonging to F.A.T., accurately asserts that the Internet is not just something you experience on a computer, but it’s also something you can react and respond to, repurpose and remix. Whether or not such practices will go down in the history of art, it pertains to the invention of a free culture where the open-source movement, as well as DIY and peer-to-peer practices are a declaration of independence from a formatted culture embodied, among others, by Google’s monopoly. **

Retweet if you want more followers is running @ XPO Gallery from May 16 to June 14, 2013
share news item