Mykki Blanco will give a talk at London’s RCA on January 16.

Hosted by RCA School of Arts & Humanities talks and Anne Duffau, the event will open with an introduction by Tai Shani.

A personality moving between performance, art, activism, music and more, Blanco started out as a child actor, studied art and dropped out of it (quoted, “the art world is just one big scam for rich people”), and became well known for being a noise rap poet, publishing From The Silence Of Duchamp To The Noise Of Boys. Dubbed a ‘digital warrior princess,’ the self-described “non-binary gender-queer post-homo-hop musical artist” also recently released debut album Mykki (2016) via Dogfood Music Group / !K7.

In another Illuminations event, Mykki Blanco launches new compilation project C-ORE at The Laundry on November 6.

The writer, activist and performance artist unveils their new full-length album comes as the first from DOGFOOD Music Group (DMG), created by Blanco and !K7 in January 2015 aimed at giving a platform for artists who “transcend conventional cultural boundaries / construct”.

As part of his involvement with The Breeder Residency Program, American artist Ben Wolf Noam has invited rapper and artist Mykki Blanco to give a site-specific performance at Romantso Cultural Center on July 23.

Noam’s exhibition, Field of Ares, is the result of the artist’s four-week inaugural residency of the programme in the Greek capital, curated by Stamatia Dimitrakopoulos and marking the beginning of the residency’s collaboration with Romantso Cultural Center.

The exhibition showcases Noam’s latest paintings and installations reflecting a decade of research into the processes that “reinterpret digital image-making techniques within analog media, translating the tools of Photoshop—gradient fills, stamps, and alpha layers—into forms of painting.” Noam’s collaboration with Mykki Blanco kicks of the exhibition, which will run for one month until August 23. 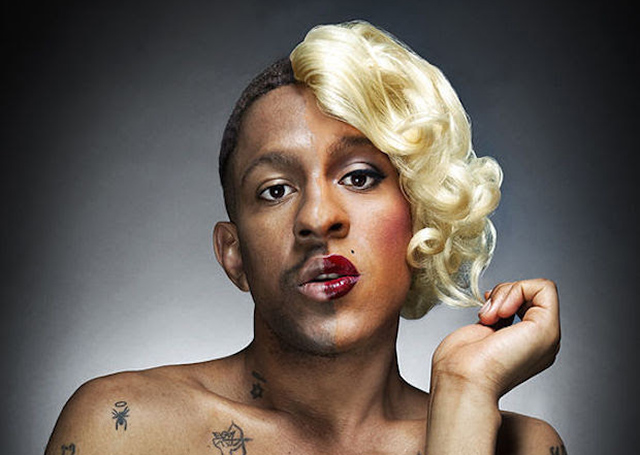 Folie Douce have dropped their second compilation of their favourite artists from around the world. Featuring tracks by the likes of Bad Dancer and Poolboy92, as well as excellent covers of Jennifer Lopez and A$AP rocky. Dutch label Paradisiaca -responsible for some excellent bass releases like Drippin x Copout- is represented by HYDRABADD. But our favourite is Miss Eaves laying rhymes over Surfing Leons’ ‘What You Gonna Do?’, her flow reminiscent of a cross between old school Salt’ N’ Pepa and Zebra Katz collaborator Njena Reddd Foxxx.

The cutting edge quintet of promoters and party-throwers from Liège have been going since 2010 and are responsible for introducing a slew of artists to France and Belgian, including Sinjin Hawke and Mykki Blanco.

See the Folie Douce Facebook page for a free DL. **

Other artists set to feature on the forthcoming record include Shy Girls, French performer Mahaut Mondino and Barbadian teen rapper Haleek Maul. Apparently its title comes from an infomercial where televangelist Peter Popoff “peddles a miracle water that will deliver free money and immerse the buyer in a divine trance”. That sounds like our kind of track.

Listen to ‘Envision’ and see album track listing below. **

There’s a big connection between this new wave of hip young rappers based in New York City and London. Angel Haze credits the UK city with being the first to embrace her and Le1f, the likes of M.I.A. and grime with opening up the sound of hip hop. As for Mykki Blanco, if it isn’t ‘Haze. Boogie. Life‘ being shot in what looks suspiciously like Dalston’s Ridley Road Market, this new video, dropped from Mykki’s recent EP, Betty Rubble: The Initiation, out on UNO last month, looks like it’s been shot pretty close by for MOCAtv.

But rather than a beaded, braided hairstyle, it’s his body that’s literally being waved around via the magic of special effects, while he crawls around the grim streets of London with an extra face on his head. It’s oddly appropriate to the weird and alien vibes of his track ‘The Initiation’ and testament to the talent of British director Ninian Doff. If you already thought that Mykki Blanco was weird, things just got a bit more so. **

Finally, a solid date for the release of New York rapper Mykki Blanco‘s EP Betty Rubble: The Initiation, out on rising taste maker UNO, May 21. After wowing the world with the mind-blowing Cosmic Angel: Illuminati Prince/ss mix tape, the teen raptress will be taking it the next level with a slew of European and US tour dates and this District MTV collaboration for lead single ‘Feeling Special’, produced by Matrixxman.

With more wigs, plenty of machismo and a seedy red light just to make everything that little bit creepier, Blanco shows her developing skills in rap, while daring people to call it otherwise: “You can love it or hate it but this is HIP HOP.” Blanco will be playing Paris’s Vilette Sonique on May 26 and London’s Village Underground on June 10. See Facebook for more details and the track listing below. **

So, Mykki Blanco‘s promise of a March EP, Betty Rubble: The Initiation, is yet to eventuate. But in the meantime the NYC rapper has dropped another single to follow February’s ‘Feeling Special‘, produced by one-half 5kinandbone5 member Matrixxman. BUGGED OUT!!!!, courtesy of Ms Mykki and Chicago’s Supreme Cuts  here, seems to be going down a similarly posturing pastiche of macho hip hop tropes.

Where Michael Quattlebaum’s subversive ‘teen raptress’ gives way to a growling masculinity, as he attacks his bigoted detractors with a, “oh, they saying no homo, look at this nigga swingin’, money changes everything.” This, over ephemeral, panning instrumentals, anchored by sub bass tones that eventually fade into an uncharacteristically emotional a capella closer. Witness the evolution of Mykki Nicole Blanco. **

We predict big things for Mykki Blanco (aka Michael Quattlebaum Jr) this year. After last year’s brilliant Cosmic Angel: Illuminati Prince/ss drop and Mykki Blanco & the Mutant Angels EP before that through UNO, there’s the announcement of a follow up with a new persona in the Betty Rubble: The Initiation EP in March.

As a first taster of what to expect, Quattlebaum has posted ‘Feeling Special’ on his tumbr and it’s a moodier wander through the weird wonderland of Mykki Blanco while moaning, in deeper-than-ever vocals, “follow me down that rabbit hole”. He also slips in some lines from the earlier ‘Kingpining’ single, while barren bass lines are provided courtesy of San Francisco producer Matrixxman. The latter happens to be a member of the same 5kinAndBone5 collective who produced Le1f‘s pumping hit ‘Wut’ and points to an even grimier sounds to come. Listen to ‘Feeling Special’ here. **

Chicago rapper Sasha Go Hard dropped her new mixtape, Round 3, on Feb 5. Joining a league of DIY artists making their mark on the long overdue rap revolution, including the likes of fellow drill star Chief Keef, suburban white girl Kitty (nee Pryde), New York gender bender Mykki Blanco and so many more, hers is an understated rhythm with a lo fi aesthetic.

Sasha Go Hard is one of a wave of artists with vastly different agendas and approaches to their craft, yet they’re all releasing music under the same umbrella of hip hop, at the same time destroying its associated archetypes at its very foundation. It’s no surprise, then, that UK-born beat-maker Diplo produces urgent opener ‘Damn’, while controversial Oakland performer Kreayshawn features on the see-sawing gangsta rap pastiche of ‘Kill Bill’. And that’s on the same track listing as vocal detractor Le1f who appears on wavy female anthem ‘To The Girls’. He criticised Kreayshawn over her association with V-Nasty and her use of the ‘n word’ in  an interview posted here.

Joining the ranks of other rap world weirdos, this new mix is a welcome step up from Sasha Go Hard’s early rough sketches and a harbinger of the goodness that is to come. Download Round 3 here. **

Here’s one that you might have missed but you really shouldn’t. Triad God (aka Vinh Ngan) is a Vietnamese-Chinese artist from South East London adding to the fast expanding intercultural exchange exploded from the cross roads of ephemeral electronica meets hip hop.

It’s appropriate then that he’s from the suburb of New Cross because Triad God comes in tow with a new breed of global rapper that includes part Native American Angel Haze, gender bending Jewish African-American Mykki Blanco and even controversial Australian Iggy Azalea. But where all these artists perform in English, Ngan’s wonky Cantonese drawl ebbs over woozy post-dubstep beats for the November 13 reissue of his mixtape-cum-album NXB, out on Hippos in Tanks.

Word is that hypnagogic conceptualist James Ferraro had something to do with his signing to the US label and you can certainly hear the similarities in producer Palmistry’s preoccupation with the transcendental possibilities of virtual worlds. What concerns Triad God is harder to define, not least in considering the language barrier for any shamefully monolingual English speaker, but to understand his words almost seems to defy the point. In typically cryptic manner the album title NXB stands for ‘New Cross Boy’, in the same way that an earlier EP Aym G 4 Life –also produced by Palmistry –is a corrupted take on ‘My Boys For Life’. It’s not far off then that Ngan gives very little away as hazy lyrics echo through the chintzy dream state of ‘PO’ and boozed flounce of ‘Remand’. It’s ‘Sun Hing J’ that draws special attention to the challenge of incorporating the meaningful intonation of Cantonese into a musical composition, as Ngan near moans his indecipherable narrative to a lumbering beat and dazed atmospherics.

As Ngan’s voice overlays what sounds like an inflected repetition of “rap star” in ‘Bland Day Tumm My Tun Joe Ter Ruler’ the album closes on said stand-out whose pitched-up samples and pumping vocal production techniques all point to an underground RnB hit. Sung in English for the first and last time, it’s a trip through the  weird world of shifting genres and fluid mind states that inform the entirely smooth realisation of the music by Triad God and those like him.

As their folklore goes, both Ngan and Palmistry share a love of Hong Kong, where they’ve never been to. It’s a joy and curiosity akin to the fascination with and Utopian ideal of a Dubai that ‘post-internet’ artists like Ferraro and Fatima Al Qadiri share. If the unreality of casino lights and infinity mirrors could be condensed to a specific sound then NXB is it. And if this is what Triad God can offer today, imagine what he’ll do tomorrow.