Printed Matter‘s LA Art Book Fair is on at Los Angeles’ The Geffen Contemporary of MOCA, running February 24 to 26, with an opening preview on February 23.

There will be an opening night preview at Geffen with special musical performances by Seth Bogart and Kembra Pfahler & Christian Music from The Voluptuous Horror of Karen Black, as well as a keynote address by artist, General Idea co-founder and past Printed Matter director AA Bronson called ‘MY LIFE IN BOOKS.‘

An exhibition of art, issues and other miscellany by the late Teen Angel — the Lowrider artist and writer behind Teen Angels Magazine focusing on life in the streets of the Varrios of California and the Southwest — will be on show, including unpublished, never before-seen original pieces of artwork.

Gagosian Gallery will present an exhibition as tattoo parlor called FLASH FLASH FLASH, and Slow Culture & Deadbeat Club have a pop-up installation of a vintage drive-thru photo kiosk with 24-hour film developing services called ‘THE FOTOMAT.’ XE(ROX) & PAPER + SCISSORS will be presenting over 100 international artists, zines, and small presses, while some publishers and titles to look out for include Dirty Looks, Hesse Press, Honor Fraser, Sternberg Press, an audio project by Linder & Maxwell Sterling at Blum & Poe, Emalin and many more.

The official after party, on February 25, will be at The Regent, and feature performances by Sophie, Yves Tumor, Bill Kouligas, Juliana Huxtable among them.

See the FB event page for the full programme and more details.**

The fourth LA Art Book Fair presented by Printed Matter will be in the MOCA’s Geffen Contemporary space, opening on February 11 and running February 14.

Included in the line up are several familiar names such as Semiotext(e), Mousse, Arcadia Missa, Sternberg Press, Onomatopee, Flash Art and Kaleidoscope, as well as others such as Juxtapoz Magazine, Kiosk, Kill Your Idols, Ooga Booga, Le Roy and Glum Magazine.

The LA Art Book Fair opening after party will be held at the Roosevelt Hotel, hosted by 207 projects and featuring SFV Acid, Yung Jake and Never Press on February 11.

Another afterparty on February 13 has an amazing line up and is on at LA’s Resident venue. Printed Matter, How Many Virgins? and Berserktown share the hosting for this one.

Outside the fair’s extensive premise and party is a concurrent event by label Fade To Mind, featuring Jam City, also on February 13.

See the LA Art Book Fair website for more details and full line up of exhibitors.**

Earlier this month L.A’s Museum of Contemporary Art teased us with their avatar futuristic animated piece “Outer Osmo Ghost Mode”, something that looked like one of Disney’s 80s underground projects, a week after we finally have the 10min piece…

The story is that of Elda and Dell Banner, two online avatars stuck in the home map of a proto-virtual internet exploration program, Osmo. Unfortunately they’ve been left behind in this ghost world by their physical creators, an actual married couple.

A project pushed by MOCAtv and Gleam House is the perfect expression of two artists obsessed with psychedelia… on one side our admired Alan Palomo (from Neon Indian) who had to add that futuristic-but-outdated score; and on the other animtator Johnny Woods who is no stranger to these parallel universes, nor Alan’s own psyche. A project worth saving in your datadrives.

We wake up most weeks with something new from MC Ride’s Sacramento band, something we weren’t expecting because behind those gifted minds there’s something new to produce each fortnight, and for this week we dreamed of something more psy than psy, it has become true. Director and animator Galen Pehrson (+ his girl) & the experimental rap trio teamed up a few months ago to give birth to True Vulture, an animated dream LA’s MOCA seemed to have to, so they decided to support it. 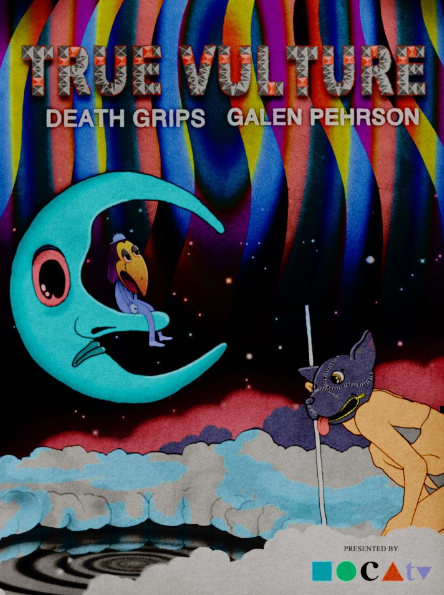